The flex offense is a slow-down, patient, 4-out, 1-in continuity offense that allows all five players to play all five positions. With this offense, you’ll have great spacing, ball movement, and player movement. Your team will be focused on passing, cutting, flex screening, and screening-the-screener to get open layups or jump shots.

The flex offense is the type of offense that can help any team be successful. Not only is it easy to learn but it’s adaptable to any type of roster. Whether you’re team is made up of big, strong players that wants to play a physical brand of basketball or a smaller-sized team that excels at spreading the floor - both can find ways to run the flex offense to their strengths.

We have many Flex Offense DVDs for rent if you want to learn everything about the Flex Offense. Click here.

In Frame 1 we see the initial configuration of the offense. Player one will pass across to player two and this will initiate the action.

In Frame 2 Player 5 will now step out and set a back screen for player two who will cut across the lane looking for the basketball and ending up at the opposite post. Player 4 has the ball and is looking to hit #2 for the layup.

In the last frame 4 will now pass across to 5, Player 3 will get the Flex Cut from Player 2, and now 4 screens down for player 2 and this action continues from one side of the floor to the other.

This article is going to break down the strengths and weaknesses of this offense, the traditional set that makes up the offense and a hybrid version of the offense as well. When you’re done reading, you should have a better understanding of the Flex Offense and if it’s a right fit for your team.

Strengths of the Flex Offense

Weaknesses of the Flex Offense

The Flex Offense is best suited for a team where every player on the roster excels at the basics: dribbling, passing, cutting, screening, and shooting. This is extremely important to the success of the offense because it allows all the positions to be interchangeable and players are able to develop their skills.

While the Flex Offense can be adapted to make any team successful there are two factors that especially flourish in this offense: shooters and smart players. If you’re team is full of great shooters or have high basketball IQs then this is the offense for you.

The Flex creates constant movement from all players on the court until they have found an open teammate - and if it’s a team full of shooters then you’ll be able to score points at a high rate. With a high basketball IQ, your team will be able to use the Flex easily and read what the defense is giving them which should lead to open shots that will put points on the scoreboard.

The #1 concept your team must learn about the Flex Offense is the basic continuity of the offense. This is the heart of the offense and all entries, sets, and variations will develop from the continuity.

The basic continuity is designed to create open shots in two areas of the court: a lay-up off the flex cut and a jumper from the elbow or high post area.

When you're running the flex offense, there are six spots on the court that should always be filled by a player. Those six spots are: two players in the corners, 2 players on the blocks, and 1 player with the ball at the top of the key.

Every player will touch every spot but generally speaking when you're starting this offense the players in the corner are your guards, players on the block are post players or forwards, and the player with the ball is your point guard

How to Run the Flex Offense

The traditional set of the Flex Offense begins with the player at the top of the key picking a side of the court. For our example, lets say they pick the right side of the court. The player uses their dribble to get to the 3-point line that is lined up with the free throw line.

The Player on the left block cuts to the left elbow for a pass from your point guard. This is an important part of the offense because it's the first actions and your team must be able to get the ball elbow to elbow without turning it over.

At this point, if the player cutting to the elbow is open they shoot it because this is exactly the area you want to get open shots from with the Flex Offense.

After your point guard sets the down screen they pop out to the corner on the right side and you are now essentially set back into the basic set.

If you didn't get an open shot off the cutter from the corner or the block then you continue running this set on the other side of the court looking for an open shot opportunity.

Most teams will find success running the traditional set for the Flex Offense but there are some variations out there in case you want to incorporate different ways to use this offense.

If you have an athletic group, here are two ways to change up from the tradional flex.

Flare Action. Instead of keeping your offense tight within the elbows, spread it out to the 3-point line and make these three changes:

Some early offense options are:

Start with two lines of players with the first players in line having a basketball.

Have the players pass the ball to the coaches. Player 2 sets a screen for player 1 so they can go to the corner for the shot. Player 2 rolls off and does a curl to the elbow for the shot.

This shooting drill starts with two lines. Players each pass a basketball to the coaches. Player 2 sets a back screen for player 1 who takes a shot at the basket.

Player 2 after screening comes up the three point line for a shot. The action then continues on the opposite side of the floor.

Use this play out of the Flex Offense to get a lob.

This play starts in a 1-4 Low set. One chooses a side of the court which will trigger the opposite post player to come to the elbow for the pass.

Player 5 sets the flex cut screen for 3 who cuts across the lane. 1 sets a down screen for player 5 who acts like they are going to come off that screen but then cuts backdoor for the lob.

If you want to learn more about the traditional flex offense and using a flare flex offense, check out this DVD with Coach Ed Cooley. Not only does he goes into great detail about flex and flare, but he covers pressure releases, post adjustments, and drills he uses with his team. 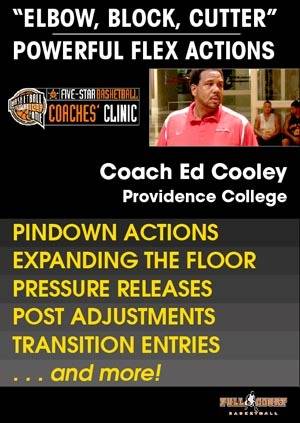 If you want to learn more about the traditional flex offense and using a flare flex offense, check out this DVD with Coach Ed Cooley. Not only does he goes into great detail about flex and flare, but he covers pressure releases, post adjustments, and drills he uses with his team. 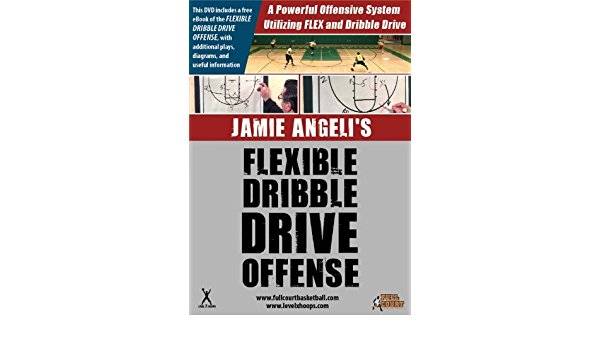 If you're interesting in learning more about the Flex Dribble Drive then this is a great DVD for you to study. Coach Jamie Angeli discusses their early offense, dribble drive actions, adjustments, and breakdown drills to use for this offense.