PLAYING TIME KILLER #1 - Not Being a Good Shooter

How the Hands on Shooter Helps Your Child Learn to Shoot the Right Way!

Stop Bad Habits before they ever develop by teaching your child to shoot the basketball the right way from the beginning. Too many kids develop bad habits from the start and then stick with them their entire career meaning they miss shots that could have been made shots for years and years. Be a Shot Maker not a Shot Taker! 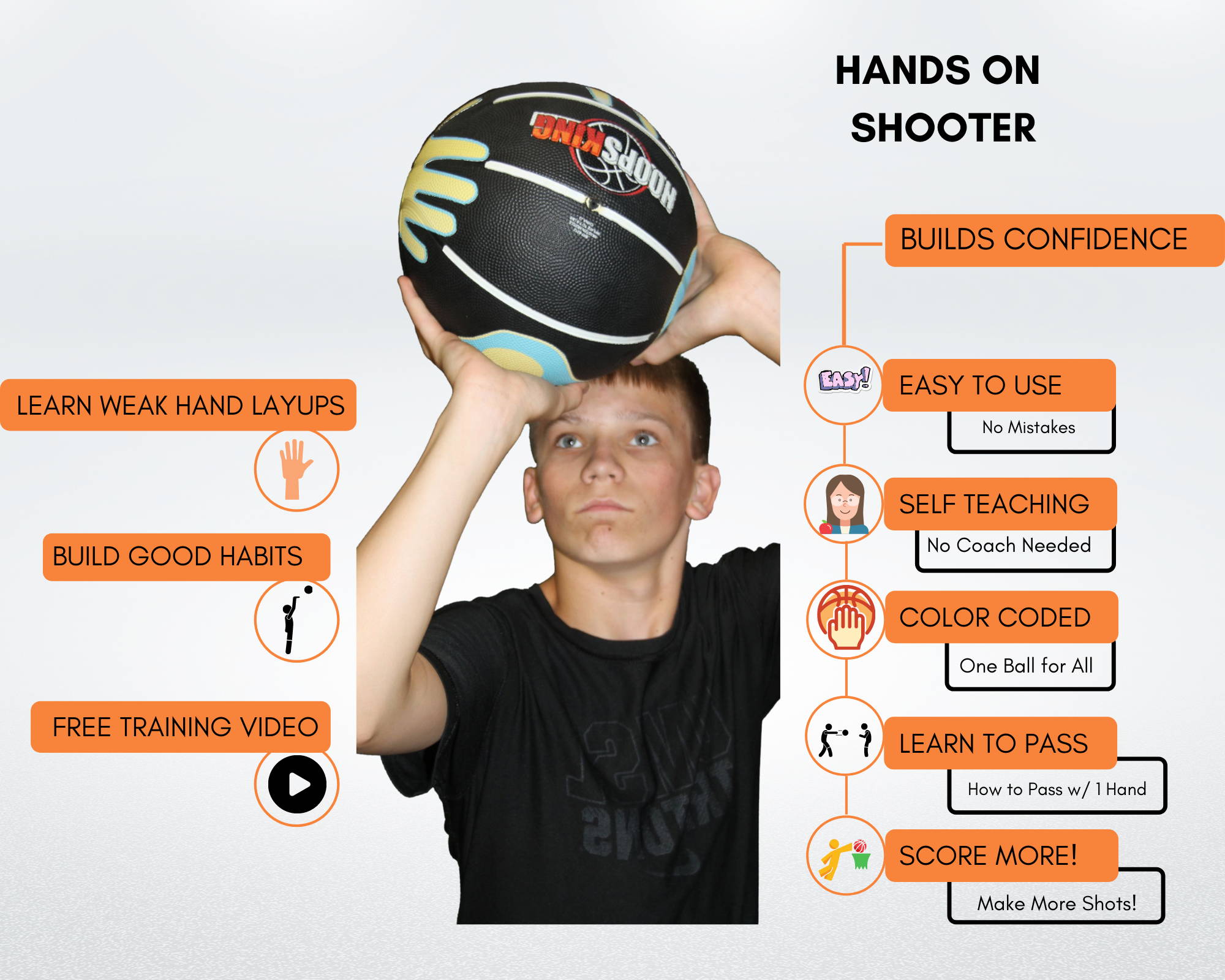 Coaches Quickly Rank Players by Who Can Make Layups from Either Side of the Court - Make a Great First Impression!

The unspoken truth is that coaches quickly start ranking players on their team by who can make layups with their weak hand. You see, coaches know that if a player can't go to their weak hand they won't be able to score easy layups in games and they are a liability on offense. Make a great first impression with your coach so that you go to the top of their list. The Hands On Shooter makes it easy to learn correct hand placement on weak-hand layups!

Cut Your Turnovers By Being Able to Make Right & Left Handed Passes...and Stay in the Game!

If you are going to make good passes vs. defensive pressure you are going to have to be able to throw strong, one-handed passes that allow you to step by the defender and relieve the pressure. A player that has to use two hands will often put the ball above their head, stand on their toes, and try to throw the ball over their defender. This pass is usually a slow lob pass that is easily stolen by the defense. Be a player that can handle and step by defensive pressure and then fire in a strong one handed pass that doesn't result in a turnover. 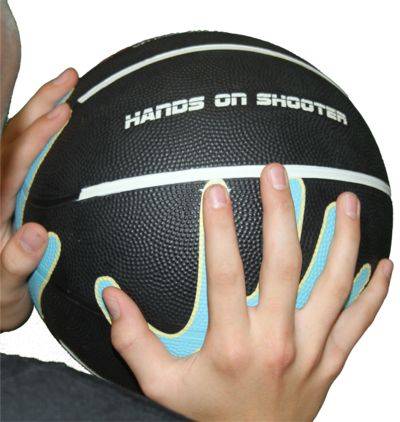 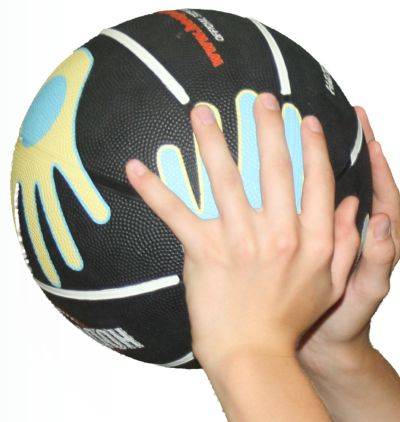 Hand Placement for Guide or Off Hand 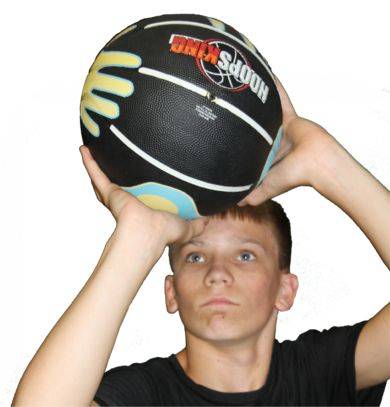 Here's a message for every Parent Of A Basketball Player - at any age - who needs to help their child learn to shoot the ball correctly from the beginning, but can't always be with them when practicing their shooting skills.

Hi, my name is Coach Chris and if you want your child to succeed with learning to shoot the basketball correctly which means more made shots in games, then pay very close attention!

Many parents of basketball players think that attending camps, hiring personal trainers is all they need to get their child to learn to shoot the ball correctly. 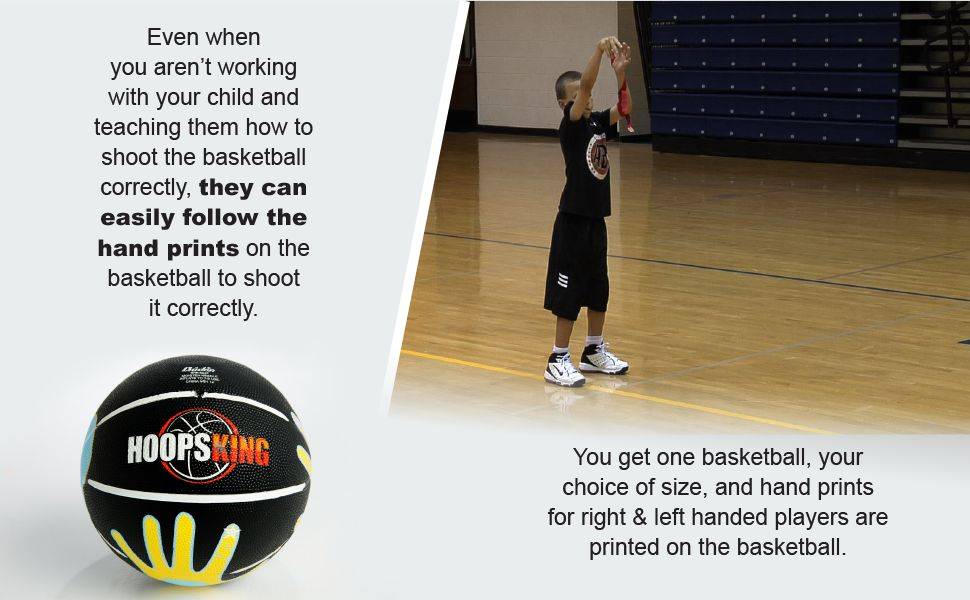 But that's not the case. Most of your child's shot development is going to take place when no coach, trainer, or parent is around. And maybe you have spent money on camps and trainers and their shot still isn't improving.

Which means your camp and personal training money is wasted unless your child is taking what is learned at camp or with the trainer and applying it to their individual practice.

You see, it's hard to remember all that is covered at a camp and honestly your child probably receives very little individual instruction at most camps.

So if you're a parent who wants to teach their child to shoot the basketball correctly from the beginning... then what I'm about to show you could change your child's basketball career for the better.

Basketball with Hands Printed On It

I'd like to introduce you to HoopsKing Hands On Basketball which has the built in coach so your child knows how to correctly hold the basketball when shooting - even when you, a coach or a trainer isn't around!

The HoopsKing Hands On Basketball makes it simple for you to:

The Hands On Ball Does More than Just Help with Your Shot!

Now you never have to worry about your child practicing on their own without someone to correct them again! The built in coach is always there.

Which also means you're not stuck feeling like your camp and personal training money is wasted because your child forgets what was taught or goes back to their old habits.

And best of all... you'll start seeing results with "HoopsKing Hands On Basketball" immediately and it costs Less than 1 day at any shooting camp.

So again, if you're a parent who wants to teach their child to: 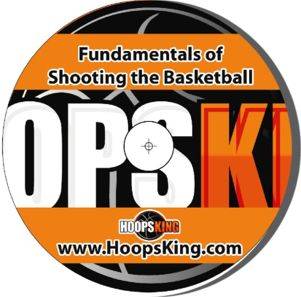 As a bonus I'm throwing in my Fundamentals of Shooting the basketball video which will teach you step by step how to teach your child to shoot the basketball in just 10 minutes a day. We use the Hands on Shooter in the video so it's easy to follow along.

Teach your child to shoot the basketball correctly whether you are around or not and watch them make more shots in games.

Order Now & Start Training with the HoopsKing Hands on Basketball!

What Customers Are Saying...

Retail: $24.99
Our Price: Now: $21.99
Was: $24.99
// "The Smooth Shooter Basketball Shooting Equipment is So Easy to Use" // HoopsKing Smooth Shooter is for every basketball player who wants to develop better shooting technique without...

Retail:
Our Price: Now: $19.95
Was:
If you want to develop serious hand strength for basketball then this basketball training equipment is for you. The Heavy Grips hand gripper series was developed for athletes who want to take the...
TE-0100

Retail:
Our Price: Now: $24.99
Was:
Finally! Now You Can DEVELOP GREAT SHOOTING FORM INSTANTLY with BullsEye Shooting Aid ... GUARANTEED! // // Do you want to help your child shoot the basketball better? Do you want to...
TE-0011

Retail: $16.99
Our Price: Now: $12.99
Was: $16.99
No Palm Basketball Dribbling and Shooting Aid to Make More Shots & Control the Ball The HoopsKing No Palm basketball shooting and dribbling aid will keep the basketball off your palm which will...
TE-0002

Retail: $24.99
Our Price: Now: $21.99
Was: $24.99
// "The Smooth Shooter Basketball Shooting Equipment is So Easy to Use" // HoopsKing Smooth Shooter is for every basketball player who wants to develop better shooting technique without...

Retail:
Our Price: Now: $24.99
Was:
Great shooters master the perfect muscle memory that delivers the exact amount of arch and distance needed for each shot. This isn't an easy thing for most players to accomplish, until now... With...
FFT

Retail:
Our Price: Now: $599.99
Was:
THE iC3 BASKETBALL SHOT TRAINER IS the #1 TRAINING TOOL TO HELP YOUR CHILD BECOME the BEST SHOOTER ON THEIR TEAM ...WITHOUT WASTING TIME CHASING BASKETBALLS ...
TE-0900