How to Keep a Basketball Score Sheet

Keeping track of the score in basketball games is something that every person involved in the sport does, even if you are just an avid fan watching the match.

But basketball also includes detailed statistical categories other than the points a team compile when they successfully put the ball into the hoop. If you are tasked to be a scorekeeper, you also have to tally rebounds, assists, steals, blocks, turnovers and other important numbers essential in the rules of basketball.

This is not just one of those easy drills as the stats has to be accurate and should not include any discrepancy. If you are new to filling out a basketball stat sheet or you just want to refresh your knowledge of it, then read on as we go through the basics of basketball statistics.

Writing down the players' names and numbers

Moreover, the number printed at the back of a player's jersey is usually the largest one you can see on his uniform, making it easier for you to tally his points when he scores. In terms of the sequence of the players' names, you can list them down numerically so that you can find them on the stat sheet more quickly. After that, you should mark with an asterisk the starting line-up of each team or basically the first five players fielded in by the coaches. You can do this first category of the stat sheet by yourself, or you can ask the coaches or the managers to write them down for you. 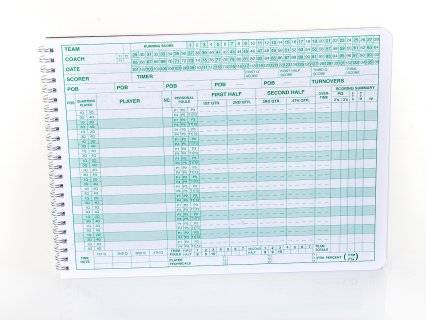 Marking Change of Possesion on a Basketball Stat Sheet

Another important non-statistical category in basketball stat sheets is marking the change of possessions. This occurs in jump-ball situations, but there is a big difference between amateur and professional leagues. In amateur leagues, teams only jump for the ball at the start of the game and to begin an overtime period.

If there is a situation when there is a tie-up for the ball, the referees will refer to the scorekeeper to see which team will be rewarded with the possession. That is the main reason why you should be careful in marking this category. It is usually located at the top right corner of basketball stat sheets, in which you encircle the squad who won the first possession.

After that, you then just draw a line through each squad so that you would easily know who will be rewarded with the next possession.

Now, we dive deep on most vital stat: points. It is the primary reason why we have a stat sheet in basketball. Two essential things to consider is that points are separated into two: team points and individual player points. You record team points through the Running Score section. When a player scores, you just put a slash mark in the corresponding box to keep track of teams' total points. As soon as a quarter ends, you will put the teams' total points in the Quarter Score section. After you record each made basket in the Running Score section, you then proceed to the players' points section. When a player makes a two-point basket, you just write "2" in the box. You write "3" when he successfully hits a three-pointer, then "1" for each free throw made. The individual scores are divided by the four quarters, which means that you have to record somebody's stats under the corresponding quarter.

Yet, that is not where basketball stat sheets end. The next critical category you have to track is the fouls. Just like in the scoring section, there are team fouls and players' fouls. When a referee calls a foul, immediately record it at the teams' fouls section so that you would know if they hit the penalty situation. As for the individual fouls, you can see the boxes of the personal fouls beside the scoring section for the players. If someone commits a personal foul, put a slash mark on the "P1" box in the section. If he reaches five fouls, you have to inform the referees because it means that he has fouled out of the game and is not allowed to continue playing. You can also see the technical foul boxes in this section. Should someone be called for a technical foul, put a slash mark on the "T1" box. Bear in mind that a technical foul is also counted on the five allowed fouls for each player, and two technical fouls means that he is ejected from the game. Also, be reminded that timeouts are recorded in the stat sheet. This category is located at the Teams are usually allowed seven timeouts in games, and two timeouts for every quarter. Make sure you got this right so that coaches would know if they have already used up their allowed timeouts.

Then, there are the other individual basketball stats that you have to keep track of if the tournament's committee deems it necessary. Usually, basketball stat sheets just record points and fouls under the individual categories. However, there is also the possibility that you need to mark down a player's assists, rebounds, steals, blocks, turnovers and field goal makes and misses. Today's coaches have been very mindful of these statistics as a helpful tool in figuring out the strengths, weaknesses and tendencies of their hoopers. But the thing is you cannot track all these stats alone so you have to ask help from two or three more people to watch the plays and mark down the stats.

We start with tracking each player's assists. Usually, point guards are the ones who tally the most assists but basketball has become a positionless game so everyone has the chance to dish out assists. When a player passes the ball to his teammate, who then successfully scores, you immediately mark a slash mark on the assists category of that hooper who passed the ball. Another important stat in basketball is the rebounds. Coaches would always say that a team controls games by controlling the rebounds. As the stats tracker, you have to be alert in identifying which player made the rebound, whether it be on offense or defense. Same with the assists, you just have to put a slash mark at the rebounds category and then just add it up for the total number of rebounds after the game. The next stat categories are defensive stats such as steals and blocks. These defensive stats act as excellent barometer for how players exert tremendous effort on defense, something that has been very underrated because most aspiring basketball athletes only want to score. Again, whenever a defensive player steals the ball or disrupts the passing lane and tips the ball to his teammate, put another slash mark on his corresponding steals section. On the other hand, if defensive players successfully blocks a shot from the opposing team, you just have to do the slash mark you did in the assists, rebounds and steals category. Coaches put a lot of emphasis in their squad's defense, so expect them to really dive deep in looking at their players' steals and blocks tally.

Then their are the other stats like field goal attempts and turnovers. Coaches would want to know how efficient their players are shooting the basketball, which is the main reason why you also have to tally how many times a hooper has shot the ball. Shots are divided by three sections: two-point shots, three-pointers and free throws. Also be reminded that you don't just keep track of how often a player shoots the ball. You should also mark how many times he has successfully put the basketball into the hoop. Through this, his coaches will be able to know how well he is shooting the basketball. Lastly, you also have to track players' turnovers as this is another barometer that tells how teams are executing their offensive plays during the games. When a player is handling the basketball then the defender from the opposing team steals it from him, that is automatically a tally in his turnovers count. Offensive fouls are also counted as turnovers so make sure to ask referees what kind of fouls they are calling.