If your team wants to play a fast paced high scoring offense then look no further than the Dave Arseneault’s Grinnell offense system. Coach Dave Arseneault is the head coach of the Grinnell College Men's basketball team. Grinnell is a Division III college located in Grinnell, Iowa, and home to one of the fastest offenses in basketball.

The goal of the Grinnell Basketball System is to get off 94 shots per game or about 25 more shots than their opponent with half of those shots attempts being 3 pointers. Each offensive possession often lasting only five seconds in duration depending on the game. They want to rebound one-third of their offensives misses and force 32 turnovers. If Grinnell can achieve these goals, it will win 95 percent of the time.

Below we’ll cover in detail the strengths and weaknesses of this offense, rules, and more. When you’re done reading this article, you should have a better understanding of this offense and if it’s right for your team.

Strengths of the Grinnell Basketball System

Weaknesses of the Grinnell Basketball System

This offense is built for a smart, quick team that can handle the ball, shoot the outside shot, and consists of good decision makers. Based on the goals of the Grinnell Offense, this team is completely an offensive minded team.

A team successful with the Grinnell Offense needs multiple scorers - especially point guards. You will need at least two scoring point guards because the offense starts with them. Since there’s constant substitutions, the bench players are just as important as the players who start the game. If you don’t have any strong players after your starting five then the Grinnell Offense may not be the best option.

There are four different ways the offense starts:

The most common way the offense starts is by getting scored on. With this in mind, Coach focuses on the reaction time of his players after giving up a basket. After your opponent scores, the offense needs to inbound the ball as quickly as possible.

The player responsible for the inbounds pass needs to get the ball out of the net before it hits the ground. They need to clear the backboard and make an overhead pass to the point guard. The point guard is going to be curling left to right or same side as the inbounder with their back towards center court. Once the point guard has the ball you’re able to get right into your offense.

If the point guard is being guarded and not able to get the initial inbounds pass then you go to the next option. Your 3 man will come back to the ball, receive the pass from the inbounder, and then look to pass it back to the point guard who has cut to the middle of the court.

Even though getting scored on is the most common starter to the offense, it is important to focus on each starting scenario and make sure all four are perfected to every detail. Each will happen over the course of a game and your players must know what to do in each situation.

There are five options in the basic set for the Grinnell Offense - each option will be depending on the defense.

Point guard starts the offense by attacking their defender and looking to penetrate and score. The key to this offense is the point guard being aggressive and being a scoring threat at all times.

The right wing player will move to the opposite side of the court which opens up the right side for the point guard to attack the rim.

As the right wing player moves to the opposite side, there’s a level of screening taking place. The other three players are going to set a down screens for the wing player.

The point guard will pass to the wing for an open shot either in the middle of the court or the opposite corner on the fade. As you can see in this clip, the first trip was a fade to the corner and the second is a curl to the top of the key.

Option #3: Trailer for a shot

This option is focused on the big man - if the big man isn’t being guarded then they are a trail option for a three.

If there’s no shot out of option 4 then we will swing the ball to the corner. If it’s a dribble penetrator, we will clear out for them to attack. However, if it’s someone we prefer to shoot, we will get the ball back to the point guard and get into motion offense.

Against a Zone Defense

There are times when teams will decide to defend the Grinnell offense system with a zone defense. The player to figure out the defense is in zone is the ball side wing that goes to cut to the other side. If they see, there’s not a defender coming with them then they should know the team is in a zone defense.

To go against a zone defense, the Grinnell Offense goes with a four-out-one-in approach. They put four players around the perimeter and their best decision maker at the high post.

They pass the ball around the perimeter until they have a high percentage pass into the high post. When the high post has the ball, the shooters will relocate and non-shooters will dive to the rim or set a screen for a shooter. At this point, the high post will be looking for the open player to score.

The hardest part for the Grinnell Offense to go against a zone defense is being patient for a shot because this offense doesn’t want to wait. That’s why the players must constantly be moving and if the ball doesn’t get into the high post quickly, they get out and the next player comes in.

This is an offensive drill that requires players to play as hard as they can for as long as they can. It’s an individual drill of knowing your own limit as a player.

One shot per possession so the offense will start with either a make or a miss depending on if the offense scores. There’s no second shot taken. If they make the shot, the offense starts with inbounding the ball whereas if it starts off a missed shot then a rebound starts the offense going to the other end of the court.

Players substitute themselves - and if they play multiple positions they need to make sure and play every spot during this drill.

The hard part of this drill is for players to understand how long they can be effective. Some might not want to take themselves out of the drill, but if they aren’t going full speed they aren’t making the offense better. 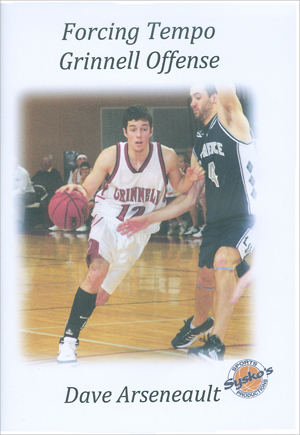 There’s so much to learn about the Grinnell Offense and finding out if it’s right for your team. If you want to learn more about developing your offense and how to form your player groups for substitutions, check out Dave Arseneault Grinnell Offense DVD. It goes into incredible detail with excellent demonstrations to help you instruct your players on the court and make your game plan according to your team. 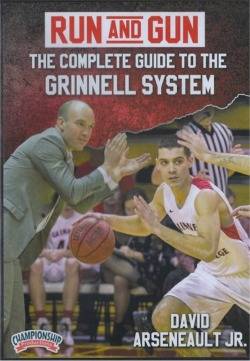