There are 2 components that you have to consider if you want to play aggressive defense. First one is the quality of opponents  Point Guard, and the second one is timing of your actions. If the opponent has a good Point, that means that you will have a harder job and a risk will be grater. Or, if the Point is not that good, you have to be careful not to play the press defense 2 much because they will get use to your positioning.

This type of D should be drilled in segments: the front two players alone, then the upgrade with the two middle players and their responsibility, and the fifth player and his role.

Let us analyze the positioning of front two players in 2-2-1 press defense.

Majority of the inbound passes are going on the ball side of the court because the board is not in your way if you are in need of the lob pass, the angle of passing lane is better and the distance that the ball is traveling is shorter.

The first task of your on ball defender is NOT TO ALLOW THE BALL HANDLER TO GO TO THE MIDDLE OF THE COURT. Instead, he has to force him go sidelines. The help defender should be positioned more then 50% closer to the ball then from the player that he is guarding directly.

The main goal of the whole play is to trap a ball handler in the right spot, and those spots are the middle corners, both in front and behind the center line. Why? Because the movement of both player and the ball is limited in this area, and there is a pressure of 10 seconds violation rule and the back court violation rule. Patience is the one of the keys of success of this kind of defense, so your players should be trained to recognize the right time to trap.

And when is the right time? When the ball handler is near the center, the direct defender must make contact and cut of the side line way, while the help defender has to come from the blind spot to close the middle of the court (slightly beneath the level of the head of the player with the ball).

The perfect scenario would be if the ball handler was to make a rolling dribble, in this case with the wright to left hand, because in this moment the vision of the action would be lost for a duration of the roll.

If you want to learn more defensive press systems, go rent a DVD by clicking on a link below: 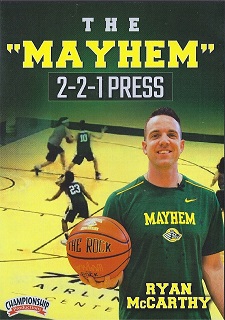