The Coach that will help us understand all the important stuff about this dribble move is Chris Hungerford from Hoopsking.com.

What is a Behind the Back Dribble?

Behind the Back Dribble is a move where the ball is moving from one hand to another, but the ball bounces behind the players back. Many people call it behind the back crossover because the moves are similar with the difference of a side of the body where the dribbling is done.

How to Do the Behind the Back Dribble Like a Pro - Revealed!

It is simple. Put yourself in a basketball stance and dribble the ball with one arm. In the moment you want to do a behind the back dribble, your hand needs to be on the outside part of the ball (red part) and pushed behind your back and off the floor in a straight line towards your other hand.

If you put your arm on the top of the basketball you will not be able to create a good angle for the ball to bounce to the other hand (blue part).

If you are not in a low stance the ball is covering more distance. That will give your defender more time to react and to try to steal the ball from you. 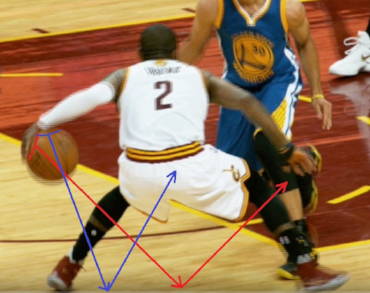 These were just the basics. There really is a big difference, when we talk about basketball, between knowing how to do something and knowing how to use that something. Everybody knows how to dribble the ball behind the back, but we all know it is not the same when it comes to using that same move in live game situations, and benefiting from it.

We asked our one and only Coach Chris to teach us what is a difference between mediocre and great behind the back dribble. The difference between the two is huge and there are some little things that we need to pay attention to in order to be able to use this move the best way possible.

What is the Ultimate Behind the Back Dribble?

The Ultimate Behind the Back Dribble is done while you are moving in a straight line. You are dribbling the ball right at the defender, and rather then going East - West, you need to go South - North. The more you use lateral movement the less ground you will cover with the dribbling and defense will have easier job stopping you. Let us see these three videos so you can understand better what am I pointing at.

Good but not the best

If we analyze all three plays, after each of them the player with the ball made a better position for himself to score. Difference is in the quality of those new situations:

1. Mediocre: Kristaps made an OK position for a open jumper, wich is good, but it is not better then the opportunity to drive all the way to the basket.

2. Good but not great: This move was good and it gave LeBron an semi - open path towards the basket, but because he went East - West so much, the help defenders had time to react and to give him some trouble finishing at the rim.

3. Ultimate: The move was so good that Livingston had all the time in the world to get an easy dunk. There was so little lateral movement, and it was so well prepared that 4 defenders did not have time to react.

Breaking Down the Ultimate Behind the Back Wrap

Now, let Coach C take us step by step, and explain all the important stuff that we need to know in order to master the Ultimate Behind the Back Dribble. 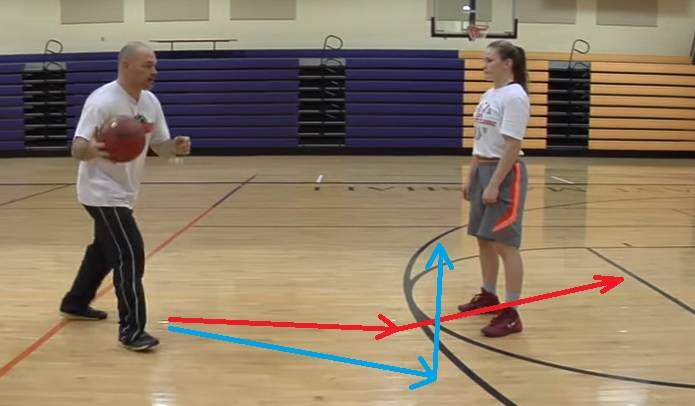 First thing that we need to have in mind is that we want to travel from point A to point B, on the court, in a shortest possible way. So, by making the behind the back dribble, we need to go in a straight line as much as we can. If we go sideways, the dribble will have less effect.

Let us see how the amount of lateral movement impacts the space won while doing the behind the back dribble. We want to take the RED path, because it will get us near the basket, and not the BLUE path, who will give the defense more time to react. Even if you are a good shooter, layups are more efficient then long range jumpers. 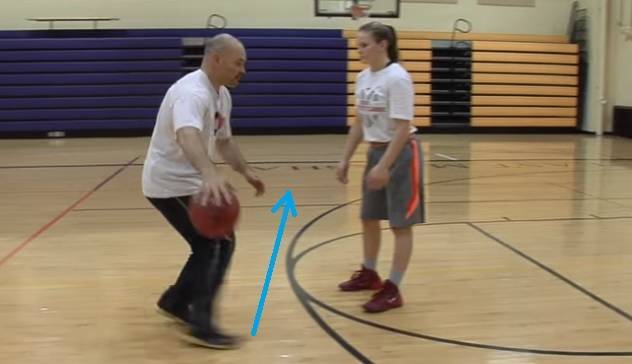 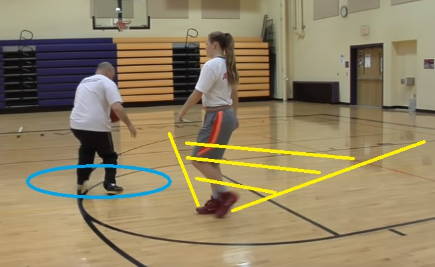 Blue (not so GOOD) path: After getting close to defender, if you decide to use more East - West movement , you will create more of the free space for a jumper and significant less of a space for a dribble penetration.Yellow area represents the ground that is easy to defend because the defense has time to react.

If we take a look at the first picture, we will notice that after the move the player didn`t gain much of a advantage over his defender and that he is still far from basket. 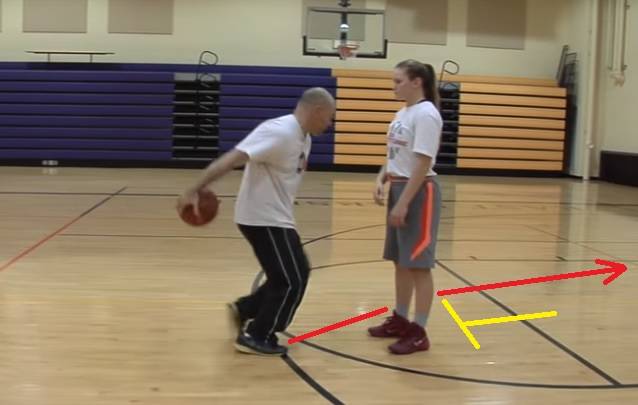 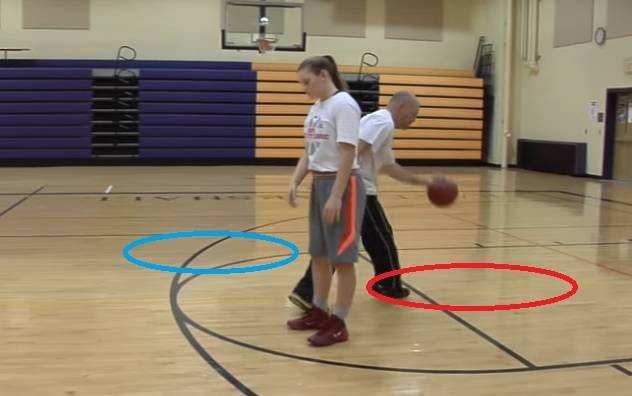 Red (GOOD) path: After the player came close to defender he takes a big South - North step and pushes the ball forward. By doing this he is covering as much ground as possible, and leaving defender unable to reconnect on defense.

The last picture, with red and blue circle, represents the diference between doing the good and the best posible behind the back dribbling in terms of how much ground has been covered and what is a quality of new situation and opportunity to score.

Step 1: Set Up the Behind the Back Dribble Move

Ok. Now that we know what we want to do with this move, we need to know how to do it. Again we will go step by step and explain every part in detail:

First, we need to have a good blow buy. We need something to set up the move. Several things are important: 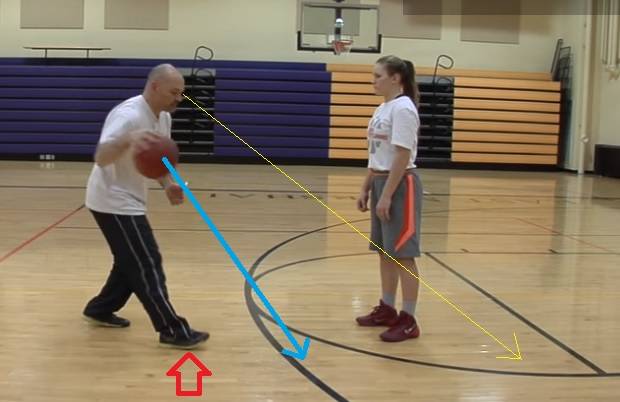 Step 2: How to Protect the Basketball 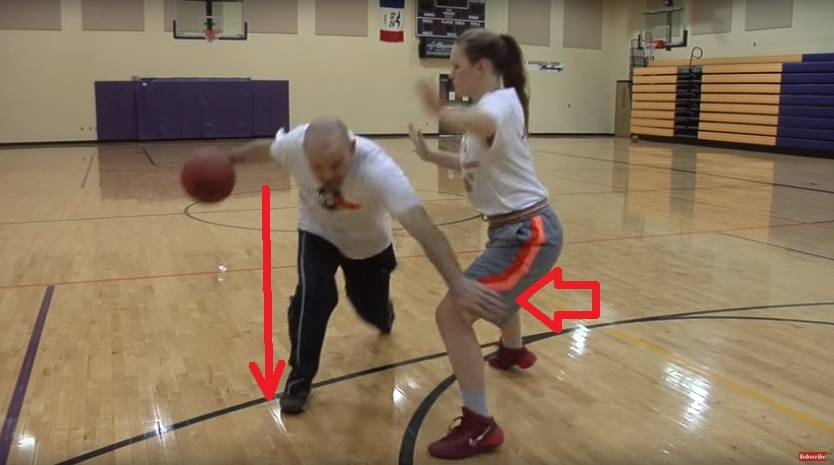 How to Practice the Behind the Back Dribble Move 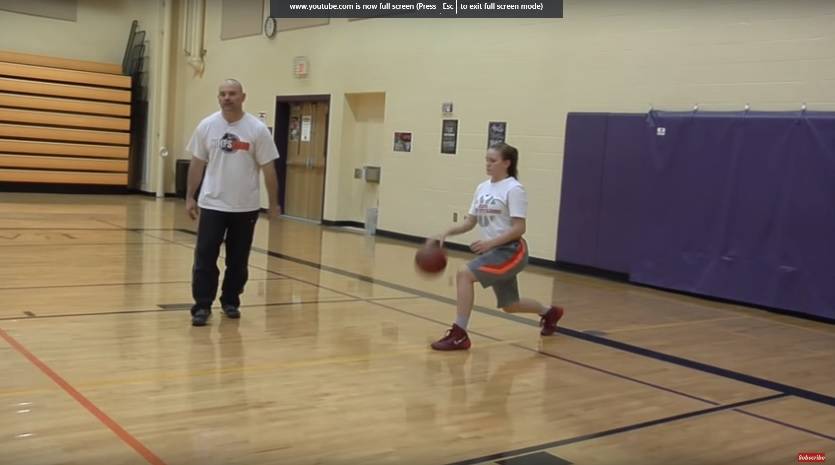 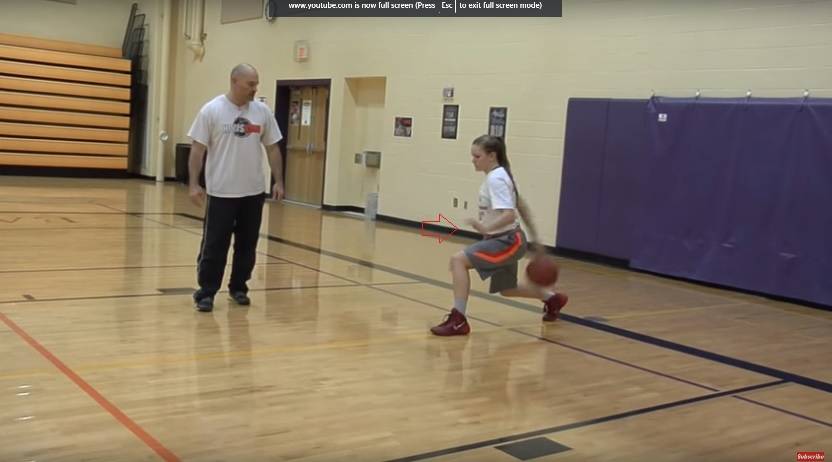 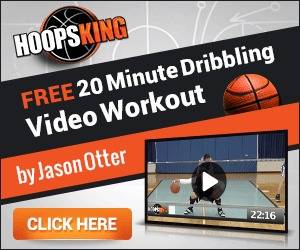 Now that we know everything about the ultimate behind the back dribble, you can go and search how Pro players are doing it. I suggest that you take a look at this NBA breakdown, also done by Coach Chris Hungerford. Enjoy.

Watch the Ultimate Behind the Back Wrap Video Series

If you want to improve even more your individual skill development program, go to Dribbling Aids at Hoopsking.com and chose from a verity of products that will help your players get better at controlling the ball. 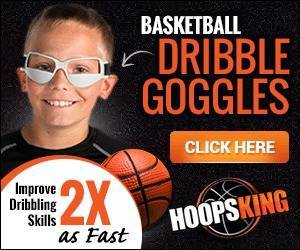 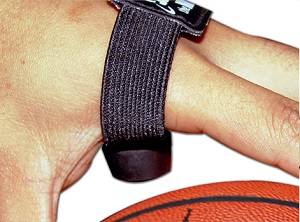 If you want to learn more basketball dribbling drills go rent a DVD by clicking on the link below: