In a 1-3-1 Zone Defense, the defenders play off the ball and cut off the passing lanes. By playing in the passing lanes it forces the offense to gamble by throwing over the defense or making a longer pass. Both of which play right into the defense’s hands because this is how they get turnover opportunities with deflections and interceptions.

Strengths of the 1-3-1 Zone Defense

Weaknesses of the 1-3-1 Zone Defense

Generally, any team can play a zone defense because they offer flexibility to be able to fit all types of personnel. The 1-3-1 Zone Defense does provide the same flexibility for any team to execute this defense, but for it to work its BEST then it is more suitable for a long, athletic team.

A team with long, athletic players will flourish in this defense because they’ll make the passing lanes impossible for the offense. With their outstretched arms, the floor will become smaller for the offense and the defense will be able to get their hands on more passes to create turnovers.

However, it’s still possible for your team to use this zone even if your entire five on the court isn’t made up of long, athletic players. Each spot in the 1-3-1 Zone has roles and responsibilities that allow you to know where each of your players need to be in order to succeed on the defensive end.

Any team can use the 1-3-1 Zone Defense, you just have to adjust how you run the zone to best suit your personnel.

A 1-3-1 Zone Defense starts with one player at the top of the zone, three players in the middle of the zone in the formation of two on wings and one in the center, and one player in the back of the zone.

The starting location of this formation depends on where you want to pick up the offense. If you’re planning to use this as a full-court press then your top player will start in the front court whereas with a half-court 1-3-1 Zone you would have your top player start at the half-court line.

The 1-3-1 Zone Defense doesn’t have assigned spots where certain positions must play like other defenses. Instead, you place players in zone positions that will suit their strengths and allow the defense to succeed. 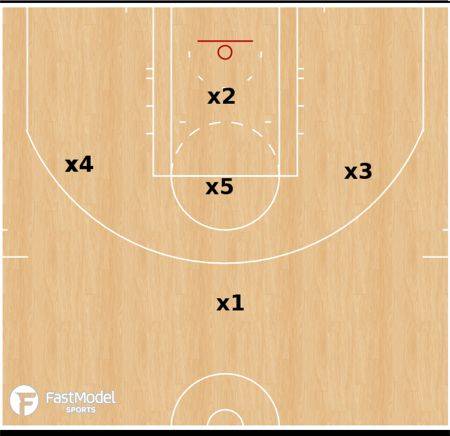 The types of players filling these positions can vary depending on your line-up on the floor, but let's talk about the roles and responsibilities by position for this defense. By knowing the ins-and-outs for each spot you’ll be able to immediately know where every player can be used on the court.

Top of the Zone

Some consider the top of the 1-3-1 Zone to be the most important position. The player at the top of your zone should be athletic, great anticipation skills, and be in tip-top shape because they’re going to cover a lot of the court. Top players set the tone for the whole defense by relentlessly trying to get deflections on every pass.

The main role for the Top of the zone is to influence the offense to one side of the court. Once the offense picks a side, the Top makes sure not to allow the ball to be reversed to the other side. To do this, the Top plays high in the passing lane to block a guard to guard pass. When the ball goes to the corner, the Top guards the ball-side elbow.

The Wings are on the outside of the zone. They are responsible for trapping in both corners, defending the ball when it’s passed to the wing (when it’s on their side), and guarding the weak-side low block when the ball is on the opposite side of the court.

When the ball is on the opposite side of the court, the Wing moves to the low block as the the only weak-side defender. If they see the offense about to make a skip pass, the Wing tries to anticipate the pass for a deflection or steal.

The Wing defends the passing lane to the corner if that ball is away from the three-point line while the Top defends the reverse pass.

Middle of the Zone

The Middle has one main job: keep the ball out of the post. With this job in mind, the Middle is usually occupied by a bigger player.

The Middle spends a lot of time battling for position against the offense. The reason why they have to battle so much is because you want your Middle to front the post at all times; regardless of if the offense is in the low post, high post, or anywhere else around the paint.

We want them in front to deny the pass to a vulnerable part of our 1-3-1 Zone which is the high post. If they’re in front of the offense then they are also in position to help if the offensive guard decides to penetrate.

Back of the Zone

The Back covers both baseline corners which can be a tough job because they could be sprinting from side-to-side a lot depending on the offense. Most teams like to put their quickest, smartest player in this position which often is their point guard.

They are always on ball-side of the court fronting the low post until the ball gets passed to the corner. When the ball goes to the corner, the Back closes out to guard the shot and make sure the offense doesn’t try to attack baseline. 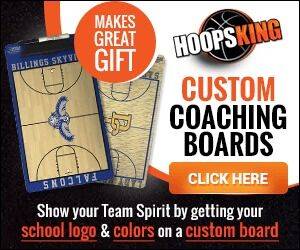 To get the 1-3-1 Zone defense started, the Top (3) is going to pick up the basketball and start pushing it to one side of the court. We want the ball-handler to have no choice but to bring the ball up the sideline. We never want the ball dribbled down the middle of the court!

As the ball goes to the corner, the Back (1) sprints to close out and guard the ball. Ball-side Wing (4) follows the ball and turns to get in the passing lane from the corner back out to the wing.

The Center (5) will drop to defend the low block by fronting in the post. The Top (3) moves to the ball-side elbow and takes over defending the high post area. Weak-side Wing (2) stays in the same position of weak-side low block ready to intercept or deflect any skip passes. 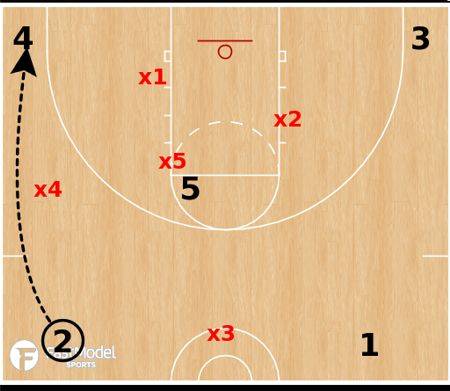 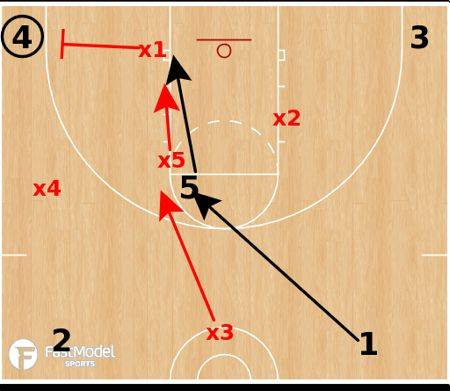 Regardless of which side of the court the ball is on, the rotations are the same. With every pass of the ball, the defense needs to be in the passing lanes making it difficult for the offense. All off-ball players should be reading the eyes and body of the offensive player with the ball and are ready to anticipate and pick off a pass.

There are basically two areas you can trap out of the 1-3-1 with - the Corner and the Wing areas of the court. Let's take a look at trapping in the corner first.

Trapping the ball when it goes to the corner is probably the best place to do so in any defense. The offensive player really has nowhere to go with the ball and has terrible passing angles to get the ball back to teammates. To some degree you also have the basket in the way of throwing a pass from one corner to the other so options are more limited for the offense to get out of the trap.

To execute the trap in the corner, once the ball is passed to the corner, the bottom player in the 1-3-1 will come out like they normall would to defend the corner, but now your wing is going to come down and trap the offensive player. The middle of the 1-3-1 zone will cover the ball side block - fronting this player to make sure there is no pass to the post. The top player in your 1-3-1 will now play two people. They will cover the high post and the pass back out to a guard in the wing area. The #1 must read the eyes of the player being trapped, see which way their shoulders are turned, all in deciding where the ball might go next. The pass to the high post or back out to the guard should be the only two passes the player in the corner has to successfully get out of the trap.

The other trap that can be accomplished in the 1-3-1 zone defense is to trap an offensive player on the wing. In this trap you will have your wing player in the 1-3-1 and the top of the 1-3-1 execute the trap

The defensive players in either of these traps need to make sure they don't let the offensive player dribble out of the trap either by splitting them or sneaking by on the sideline.

This 1-3-1 Zone Defense Guide should cover everything you need to know about this defense, but there's always room to learn more. To learn more start browsing through our vast selection of Coaching DVDs right now.

Our basketball training videos feature the best of the best. From the top coaches in high school, college, & the Pros to the best basketball trainers who teach Pro players we have them all. We have DVDs for rent by mail, downloads available for purchase and 48 hour rental, and also as DVDs. You can watch them over and over, take notes, and then rent another DVD over the same topic and very quickly your knowledge of a specific topic will reach mastery level.

Using basketball training videos as a coach can change your entire coaching style. You will see how the best coaches teach the game, how they talk to players, how they drill, and you can take their knowledge and apply it to the court right away wherever you coach. 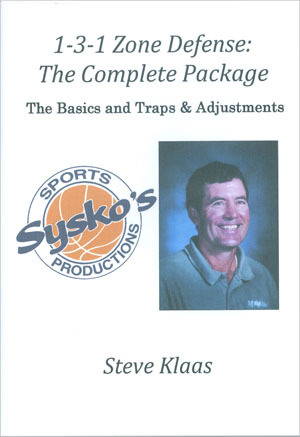 This DVD package includes both Steve Klaas’s 1-3-1 Zone Defense: The Basics and Traps & Adjustments. The basics show each player’s slides and coverages for any offensive movement. It also discusses the five rules that make Coach Klaas’ defense effective. The video teaches the defense with two simple breakdown drills. Coach Klaas continues the development of the 1-3-1 with the traps and adjustments he uses to confound opponents. He shows how the defense can be used from at any level on the floor and how he trap tops and corners. He also teaches three other adjustments used versus a strong high post player, a strong low post player, or a great perimeter shooter. Running Time: 86 Minutes. 2003