We all know that the in-game analysis is a standard used to and competition. However, it is not as common at the youth level. The largest number of studies about match analysis have studied the variables of technique and tactics about the final actions of a team’s ball possession. However, a few studies have analyzed the participation variables of technique and tactics. The purpose of this study was to determine the differences in final and participatory actions of technique and tactics concerning winning and losing teams, ball possession, and type of attack phase in youth basketball games. The sample consisted of 184 male players from 16 teams with an average age of 15.6 ± 0.2 years. The twenty-four games were analyzed from the men’s under-16 finals of the Championship of Andalusia (Spain). The variables studied were: game result (win or loss), variables related to the type of ball possession, and variables related to a pattern of play. Two groups of three observers were utilized (one group observed terminal events of each possession and the other observed possession time and pattern of play). The minimum inter-observer correlation was 0.94. The results found significant differences between winning and losing teams in the following variables: winning teams had higher values than losing teams in the following variables: 2-point field goals made, free throws made, dribbling opposed, time of movement, dribble time, use of screens, fast breaks, attack phases from 1-5 seconds, attack phases in which 2 players participated, and attack phases in which 5 players participated. The results showed that the winning teams have patterns of play that use less dribbling, in general, and less dribbling with displacement, in particular; and they used fast attack phases (1-5 s) in which two players participate. Winning patterns of play were those that used either fast breaks or a long attack phase in which all players participated.

From the perspective of match summary, oftentimes, the coach, players, and even the public make individual evaluations that are strongly influenced by match results. The utilization of research with validity, reliability, and objectivity in match analysis is an essential step in eliminating subjective analysis. Match analysis provides improvement and/or the acquisition of knowledge about the sport from two aspects: physical and technical - tactical. This information allows one to organize and design the learning and training methods in team sports and to try to establish the principal elements that influence winning and losing. However, most of the studies have studied professional or semi-professional teams, by either examining the game to plan and design adapted sessions and tasks in preparing for a competition or by analyzing the pointers related to winning. Only a few times people have analyzed youth teams. In both cases of investigation, the majority of the authors analyzed the variables linked to the final actions of ball possessions such as shots, efficacy percentage, assists, turnovers, steals, personal fouls received, points scored, etc., or other variables like rebounds or even fast breaks. Most of those studies assume that two-point shots made by the team and the efficacy of them are the main determinants of winning. Also, they show the connection between a number of rebounds made and winning, which is to say a bigger number of rebounds made means a greater chance to win the match. In abstract, the bulk of the studies reviewed name two-point shots and the number of rebounds as the two most statistically significant determinants of winning or losing a game in basketball. However, studies that relate production with a time of ball possession have not been affirmed. Objective knowledge about final and participatory actions about performance will help coaches to create game styles and systems that help player development as well as winning.

Therefore, 3 the purpose of this study was to conclude the differences in final and participatory performances of technique and tactics to winning and losing teams, ball possession, and type of attack phase in youth basketball games.

The specimen consisted of 184 male basketball players (37 point-guards, 32 two-guards, 59 forwards, 21 power forwards and 35 centers) from 16 organizations. The players had an average age of 15.6±0.2 years. The player's actions were examined during 3897 offensive plays, resembling the 24 games of the men’s under-16 finals of the Championship of Andalusia. The pattern used in the present work was descriptive and was based on an observational methodology used to the data acquiring. The chosen variables were determined by an expert association of coaches and researchers. The games were analyzed through systematic research by four expert observers, trained using the methodology described by Anguera and Santoyo. Besides, the inter-rater reliability of two separate observations was estimated to guarantee sufficient quality of the observation system. A reliability index of 0.95 was found (intraclass correspondence coefficient and Kappa index).

The variables noted were:

Variables related to the type of ball possession:

- Participating players: Number of players that were engaged in each attack phase (minimum of one player and maximum of five players).

- A number of sets used in each attack phase: The following categories were differentiated:

- Efficacy: Number of points scored in any attack phase (0 points, 1 point, 2 points, 3 points, and more than 3 points). In the case of personal fouls, it was thought that the efficacy was similar to the number of free throws scored plus the previous shot, if successful.

- A number of attack phases: Percentage of the efficacy of the offense (phases in which teams score). A detailed analysis of the different variables was carried out (averages and percentages). 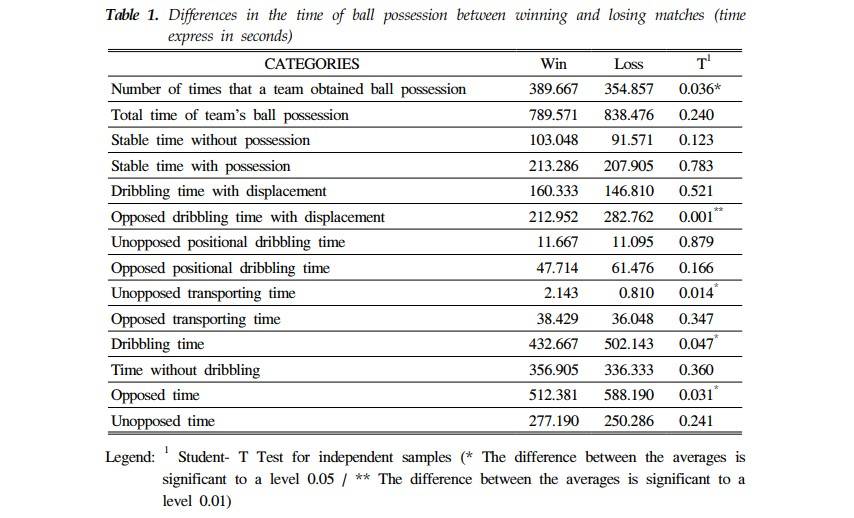 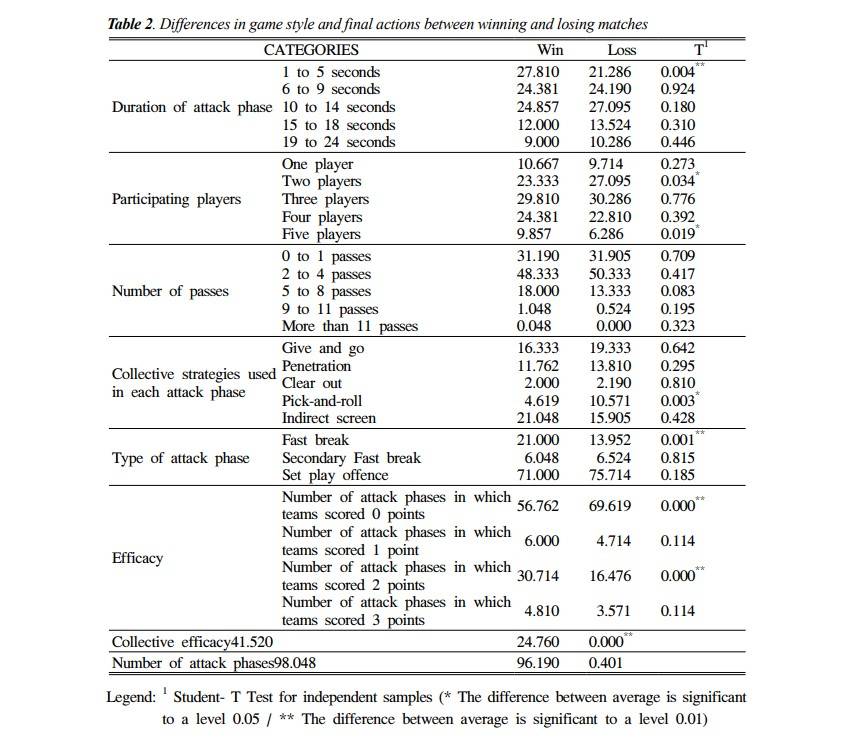 Concerning type of ball possession variables, the outcomes show significant differences in total dribbling time and opposed dribbling time with displacement of winning teams in correlation to losing teams. Therefore, despite the value of the use of dribbling in basketball in general, and in youth basketball in particular, it is recognized that game systems that reduce the use of dribbling produce more speed and more efficacy in the game. Concerning ball possession type, opposed ball possession time was higher than free ball possession time (67.25% to 32.75%). Hence, as most of the authors recommend training with "game-like situations", it seems logical that there should be a larger utilization of responsibilities with defense during practice. Coaches should design drills in "game-like situations" where defenders have restricted actions. Relating offense with victory, statistically important differences exist between the winning and losing teams in number of attack phases of short duration (those less than 5 seconds and in fast breaks). The info show that 75.03% of attack phases were done with set play offences (72.7 per match), 18.14% with fast breaks (17.6 per match) and 6.7% with secondary fast breaks (6.4 per match). These informations are similar to data found by some other authors, which indicated that 20.5% of the attack phases studied were fast breaks and the rest were set play offences. In top performance, it was noted that an average of 14.02% were fast breaks, and that there were an average of 9.8 fast breaks per match in the Junior World Championship of 2001. Similar data was located in the European Championship of 1999. They observed that 85.2% of the attack phases were carried out with set play offences, 10.2% with fast breaks, and 4.6% with secondary fast breaks. Accordingly, to these facts, there is a higher number of fast breaks in youth basketball than in senior years. The cause may be because of the higher number of turnovers, steals, and missed shots in the youth basketball. One more thing is important, statistically vital difference in the number of attack phases in which the five players of the team were engaged were observed in winning teams. In youth basketball, most of coaches agree on the necessity of using an offense based on fast breaks with a decreased participation of players (one, two or at most) and the use of sets with dynamic styles (a lot of ball mobility and with constant imbalance with the opponent that implicates participation of three, four or five players in any attack phase).

The cause of this is the fact that the youth players have no experince at decision making, they did not develop the skill set and their body is still growing and changing and all the mistakes come from these three things.

Coaches know this so they want to neutrilaize those mistakes by trying to score more points in transition, or to be orginized by drawn set plays. This way, coaches are trying to minimize turnovers by telling their players what to do at every step of the offense.

Also, diversity was found between the use of the pick and roll, which is utilized more by losing teams than by winning teams. The direct screen is used often in the final moments of possessions to produce complex situations with a low efficacy percentage. Only when there is a previous irregularity in defense will its utilization be effective. In the end, the teams that had a bigger number of victories were those that combined the use of fast break with two participating players and the use of long-duration attack phases that included all of the players who made more passes and less dribbling.

Games and practicies have to be adjusted to the youth players who are trying to develop their game, and not the other way...to addapt a young player to a senior style of play.

In essence, the following conclusions can be placed:
1. Winning teams had higher values than losing teams in the following variables: 2-point shots made, free throws made, engaged dribbling, time of movement, dribble time, use of screens, fast breaks carried out, attack phases from 1-5 seconds, attack phases in which 2 players played, and attack phases in which 5 players associated.
2. The average time that a youth team has opposed ball possession is higher than the unopposed time.
3. The teams that use a game style with fast breaks and set play in which all team players participated, as well as with decreased use of dribbling, got a higher number of victories than the rest of the teams.