Ball Screen Action, the Pick and Roll and the Pick and Pop, are the most used and the most effective offensive plays throughout the history of the game all until today. You can see it in the NBA and you can see it in the youth basketball.
And there is a big problem. Go and ask any coach or a player on any level of basketball, ask them if they know all 7 fundamental parts of any ball screen action. You will be surprised by the answer.

What is Pick and Roll/Pop?

Pick and Roll/Pop is a ball screen action where a bigger player without the ball is setting a screen for the smaller player with the ball. The whole idea of the play is to try and make two kinds of offensive advantage:

As modern basketball is rambling away from the traditional game positions, we can see more often that the small players are making screens for big guys and off of this action they are searching for some good solutions on offense. In this next video, we are going to see a Pick and Pop action where Kevin Durant (7 ft) is a ball-handler and Steph Curry (6.3ft) is the screener.

As we can see, as long as the team is searching for the best solutions on offense, and as long as the players know what are the strengths and weaknesses of their teammates, making the right play is the way that the basketball should be played.

As we all know, on-ball defenders are getting more and more aggressive by the year because basketball has moved from a slow-paced and playbook orientated to an up-tempo run and gun sport. Everything is quicker, coaches like that their players run much and shoot often, and even in the youth basketball people have scouts to analyze their opponents.

Creating separation is the first thing that the ball handler must do because the screen is not effective when the defender is breathing on his neck. The goal is to get away from the defender at least on an arms-length so he can be below the screen level. This way, the ball handler can make two steps toward the screen and build up speed that is needed to create a switch on defense.

Separation can be created in many ways:

This is a good example of how separation can be created. As we can see, Bradley Beal of the Washington Wizards is going to play a pick and roll action with Marcin Gortat. As the screener is coming from the paint, Beal attacks his defender with two dribbles as if he is going to drive a lane. His defender reacts naturally, and he is moving towards the basket. Look how much space now Gortat has to make a good screen that led to an open shot.

Player coming to make a screen has to create separation too. The idea here is to make his defender trail a bit, so there is more space for the ball handler to make his play. Also, if the screener defender is trying to catch up to his man, that means that he is running fast towards the ball which can be used by the dribbler to gain advantage and drive-by him. It is hard for a big man to run in a sprint, to stop and to back peddle towards the rim in a short time. 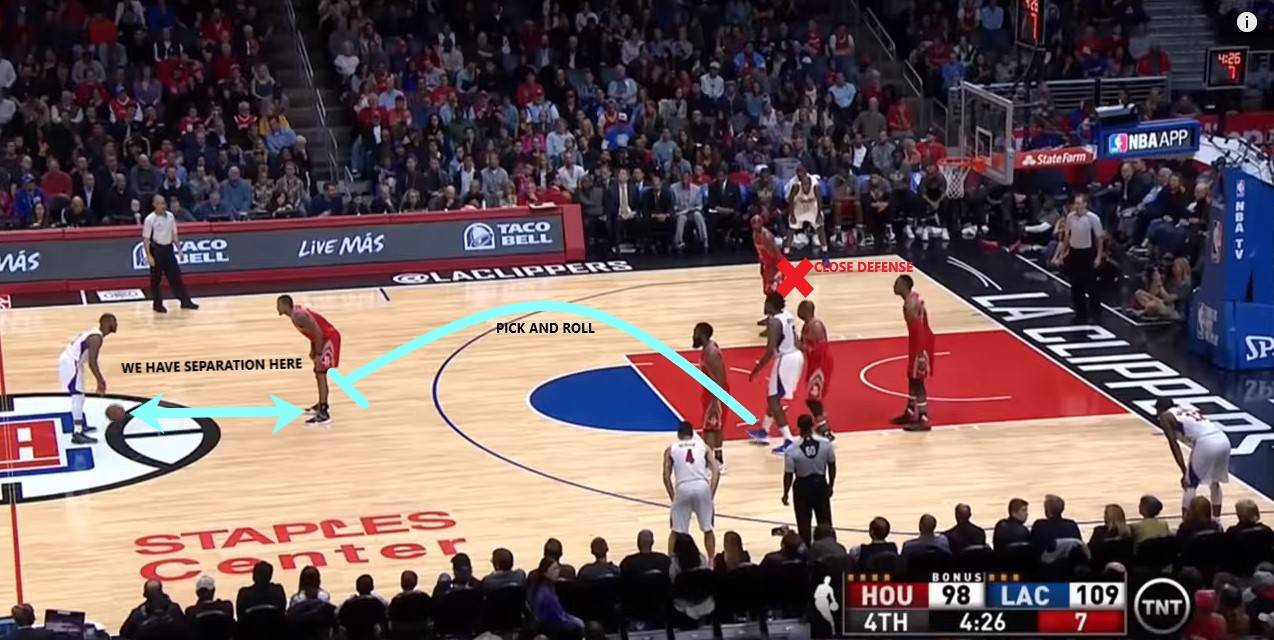 Here we can see a simple pick and roll action between CP3 and DeAndre Jordan. The first thing that comes to our mind must be the separation on the ball handler. As we all know, Chris Paul is one of the best ball handlers in the world so the defender decides that it is better not to play pressure defense on him because most of the time CP would go around his defenders or make them commit a foul. 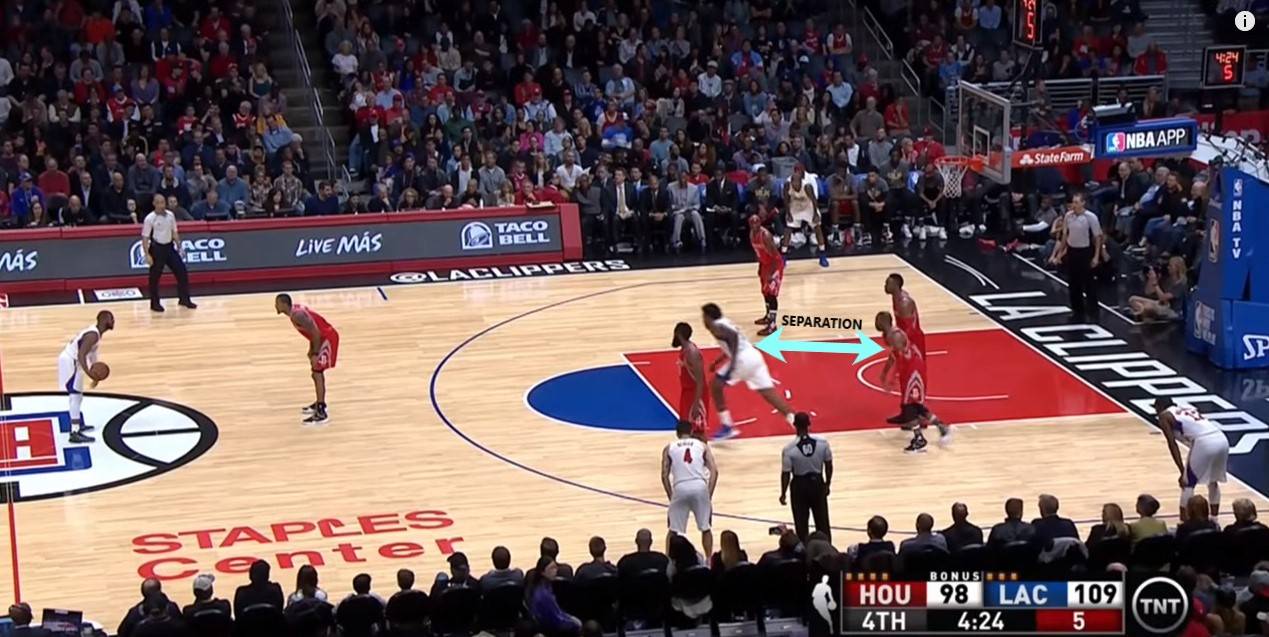 The defense is tight on DeAndre. What he does is that he takes a few steps back, toward the basket, he bumps his defender a bit and he sprints toward the ball handler.

This way, Jordan creates a separation so his defender now is far from him which creates more space for Chris to attack the defense. 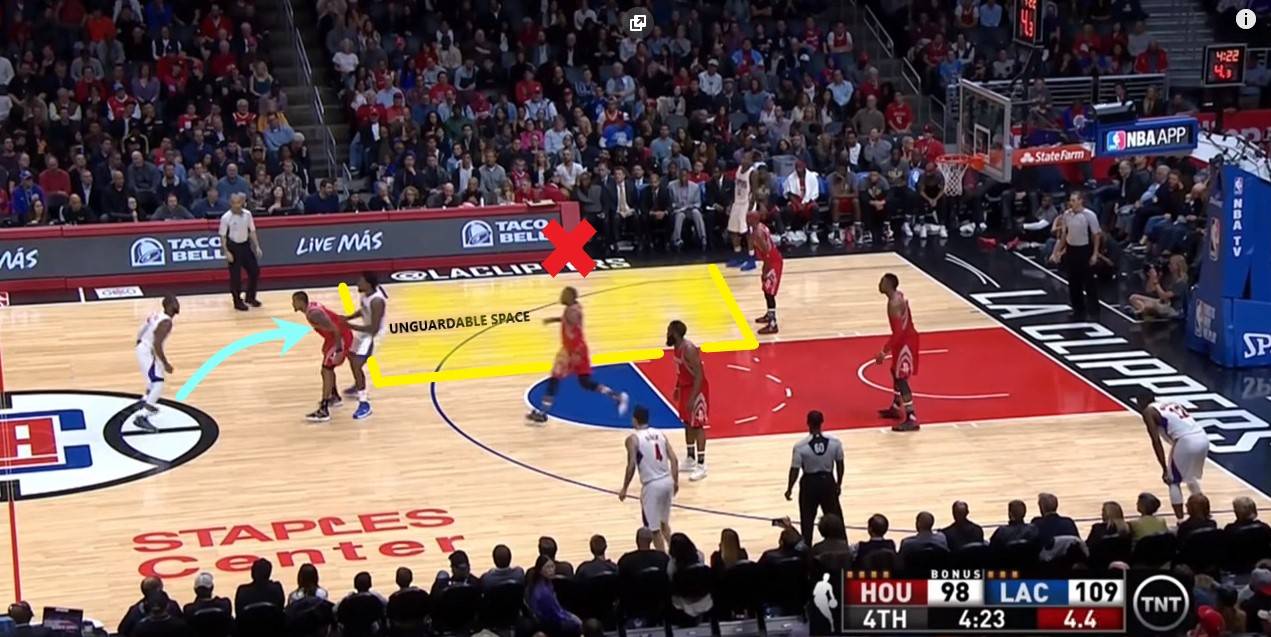 And here it is. We have the screen, and the yellow area represents free space that is left for the dribbler to use and all because DeAndre made such a good preparation for the screen.

To get more efficient as a screener, there are some things that a player has to do: 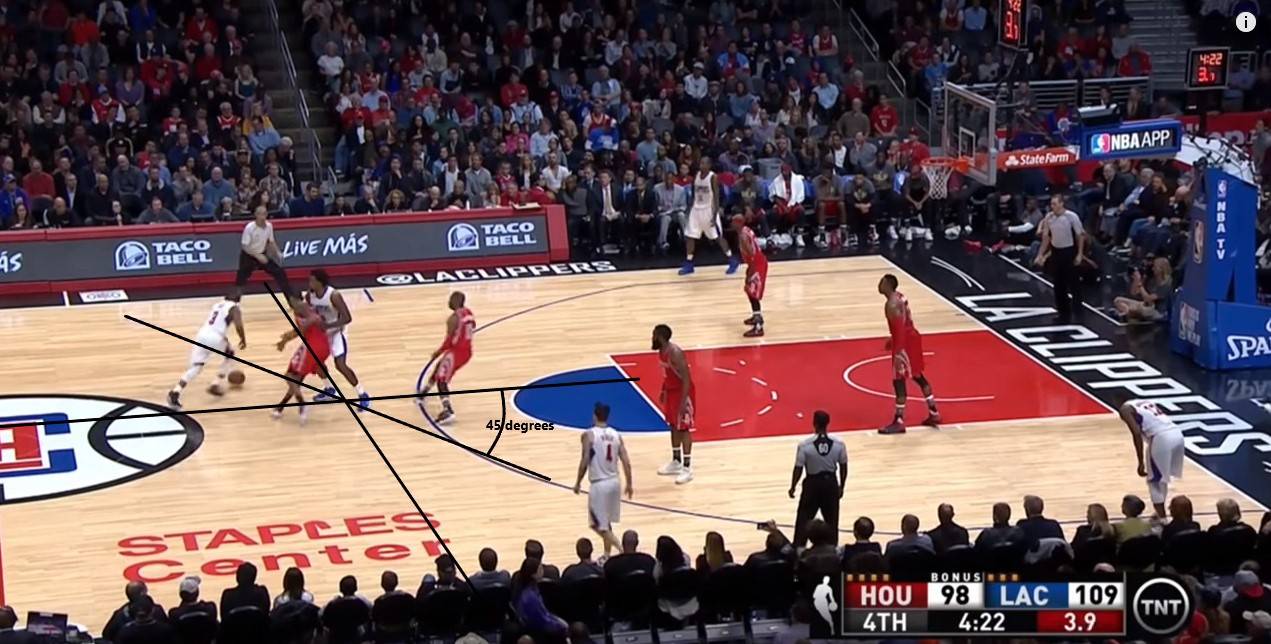 A good screen angle is a thing that depends mostly on the position of the ball on the court. To make things simple, I like to tell my players if its the center ball screen action then its 45 degrees, or if it's on the side, then it's back to the opposite corner. 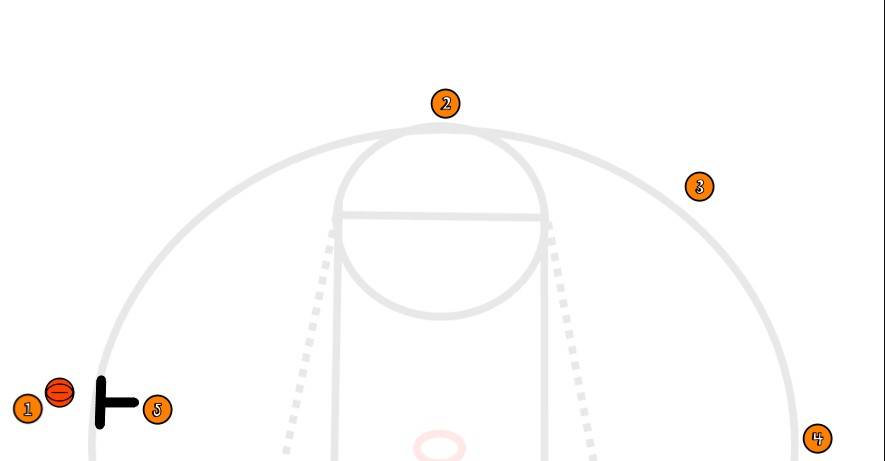 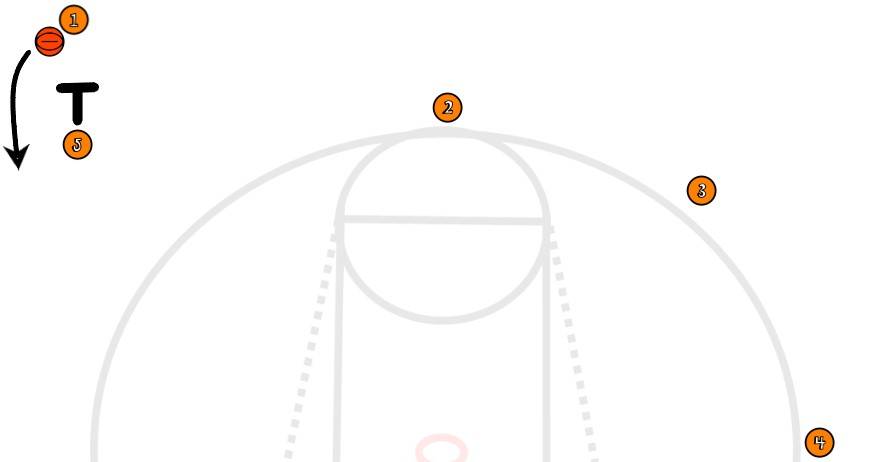 One of the most important parts of the screen is the contact itself between the screener and the on-ball defender. Ideally, the screener uses his inner half of the body (the part closer to the ball) to bump a defender into his inner hip.
This kind of contact is going to result in a manner that the defender will have to go around the screen, to get stuck above the screener without the chance of getting below the screen. 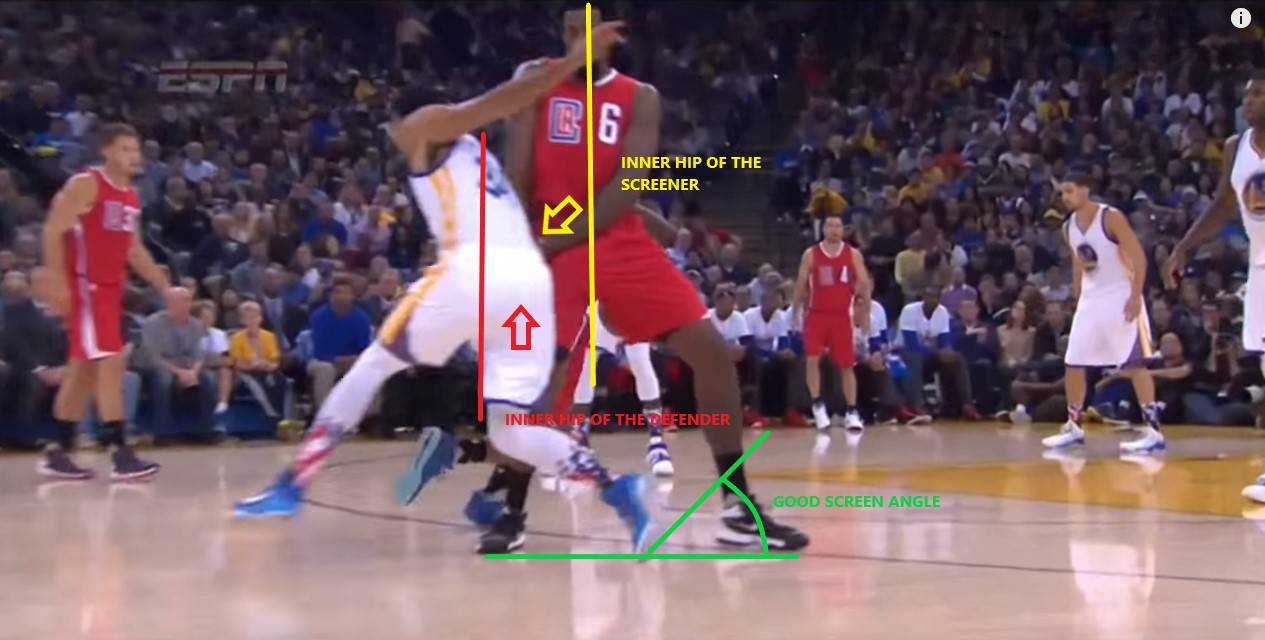 So, the goal is to let the defender go around the screen but to slow him down as much as possible.
The second goal of the screen is to keep the on-ball defender above the screen so there is room for the screener to go inside the paint without a chance of the switch.

5. Player with the ball attacks off the screen

Two Dribbles! No matter what anybody says, two dribbles are a maximum amount after which the player has to make a decision. When going toward the basket, two dribbles are going to put you in a position to both finish or to make a good pass to an open man.
The third dribble is taking you deep inside the paint. If you are deep inside the paint, the help defenders are going to take their positions so finishing is still the option (pull up jumper, layup, floater), but passing lanes are going to close so making the assist is going to be complicated. 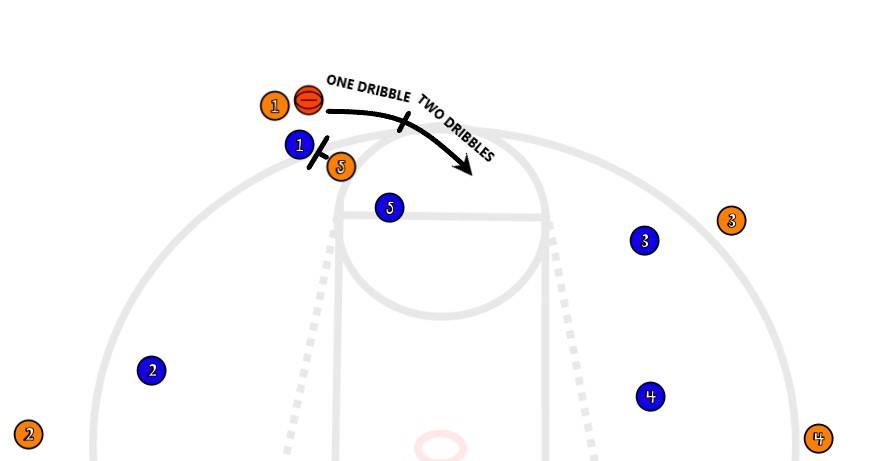 The options that the ball-handler has after taking 2 dribbles toward the basket:

2. Drive toward the basket 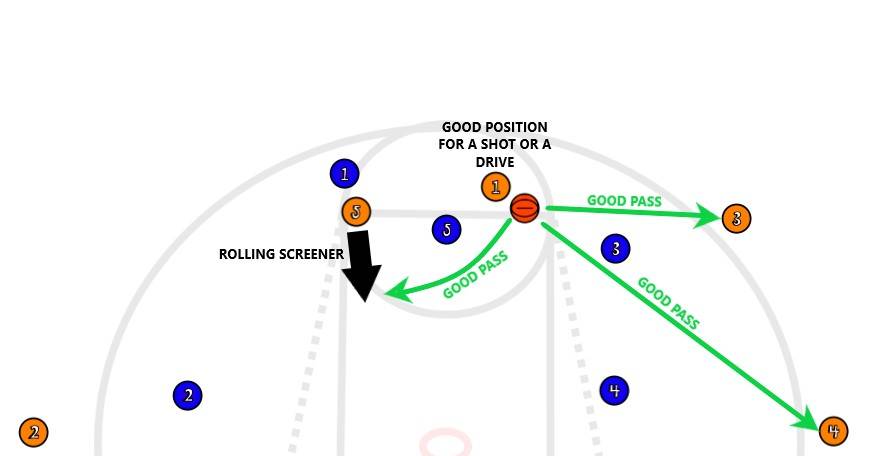 After a third dribble toward the rim, the defense is going to shrink the court and they are going to get real close to the ball handler. In this situation, everything becomes harder:

1. 5 is now real close and can contest a shot or a layup

2. 4 is blocking the penetration lane 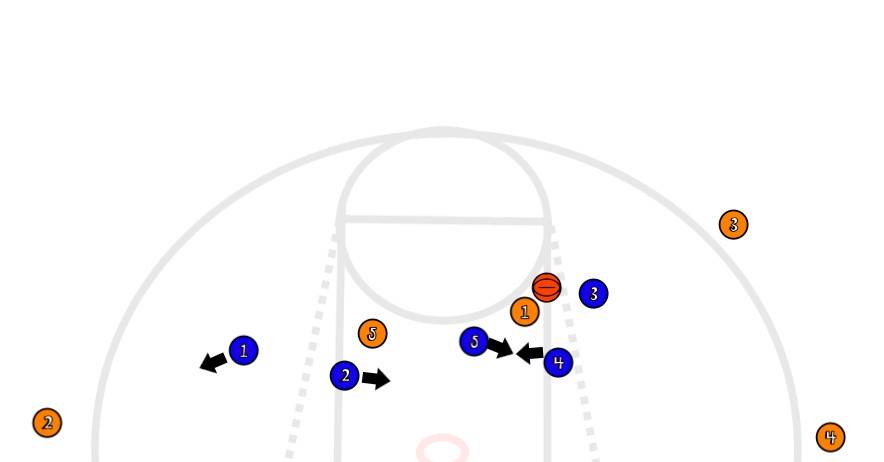 fter the screen, a screener is in a position to make his move. Two situations need to be explained:

In this opening, the screener is not loosing the ball out of his sight because he is making a backward pivot around his outer leg. Coaches who prefer this move emphasize the vision of the ball at all times because the pass can be thrown at any time.

This move is making the screener loose vision of the ball for a second, but, he has a better awareness of the on-ball defender at all times. This version is a bit quicker than the rolling variant so I like to use it when I know that the opponents like to hard hedge the screen.

2. The screener is slipping contact and he makes action

This time, the screener is evading contact and in a sprint, he turns a corner and runs toward the rim. Ball handler is not attacking off of the screen but he remains static and he is looking to make a pass. This version is used when we see that the defense is "reading" our actions and they try to set the defense early.

The final stage of the ball screen action is decision making. What is the offensive decision on the particular play depends on two things:

Usually, when the defense play this way, it is easy to make a good pass to the big because if the on ball defender gets stuck on the screen, the paint will be undefended. This pass is going to be a fast one so the rolling big is not going to be near the basket. It is more likely that he is going to be in the free throw line area and that the help defense is going to be in front of him. You must train him not to make a charging foul and instruct him to look for the open man who is either cutting toward the rim or standing alone in the corner for the shot. 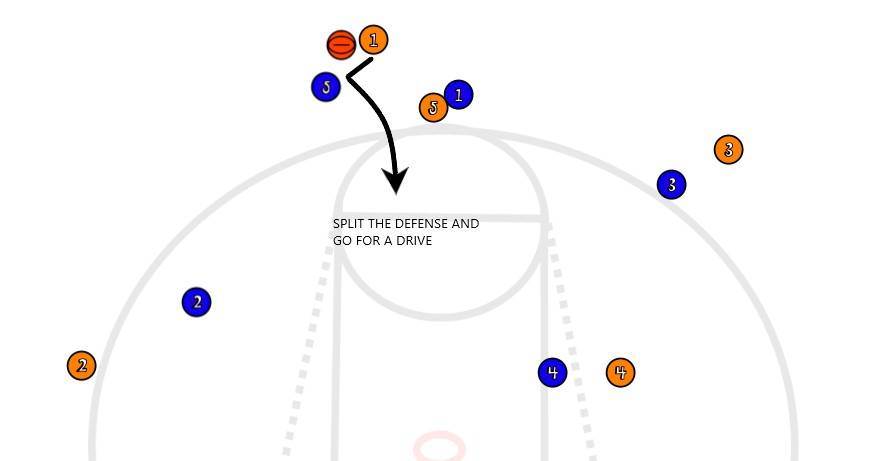 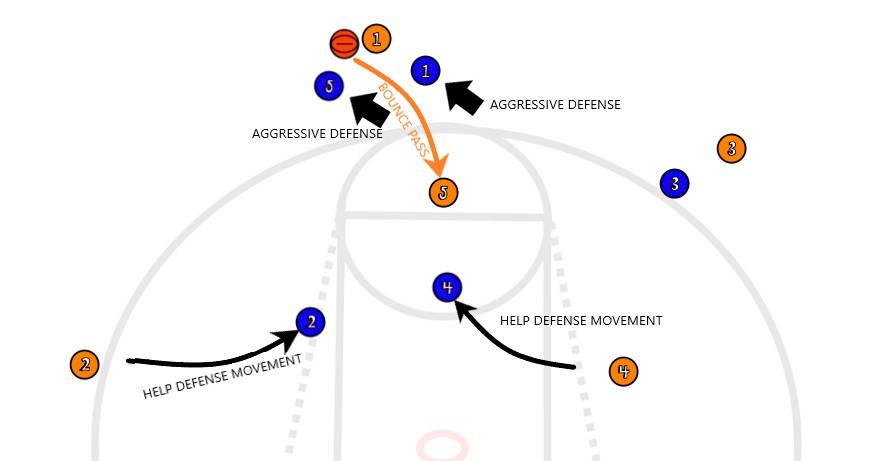 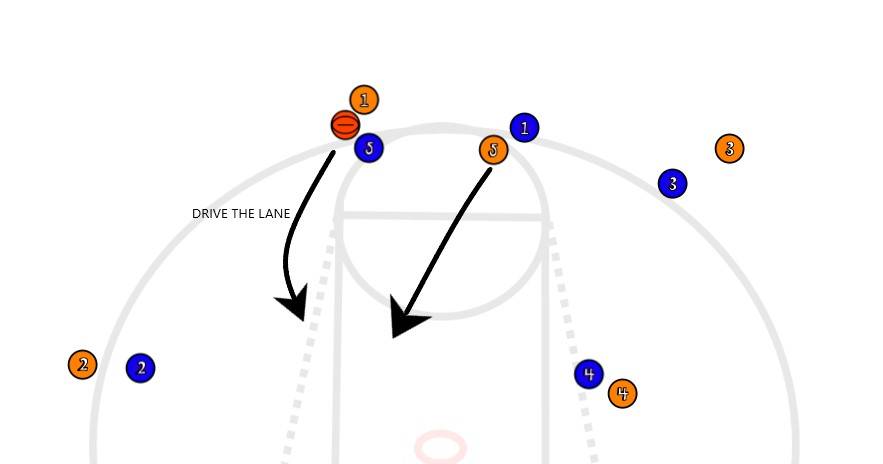 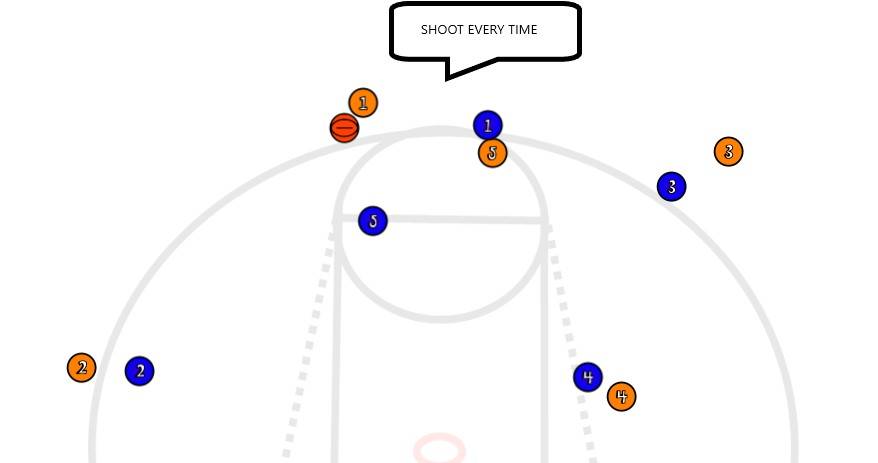 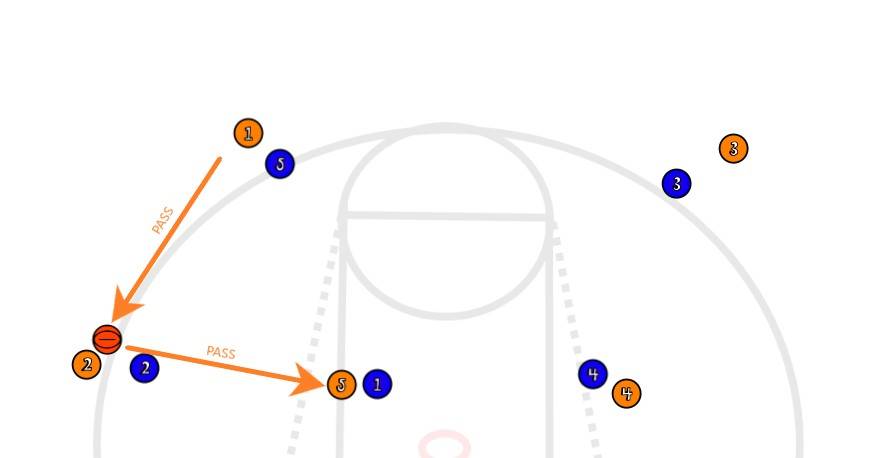 As you can see, now we have the complete insight with all of the options how ball screen action should be played. I do not believe in "side" or "corner" ball screen action as something different then what have I wrote and explained in the article. The principle is the same: get some kind of advantage, attack, scan the floor and react.

If you want to learn more about the ball screen action, go rent a DVD by clicking on the link below: