Everybody is talking about Sacramento`s great and powerful offense, but the secret of their success is lying in a very good defense where they rarely make some mistakes. There is always a hand in the face, the rotations are good and you can rely on the help defender to come and cover up for you if there are some mistakes. Kins won last night 104 - 99 all thanks to defense, and because of that I have chosen this sequence to analyze just to show you how should one team protect the basket. 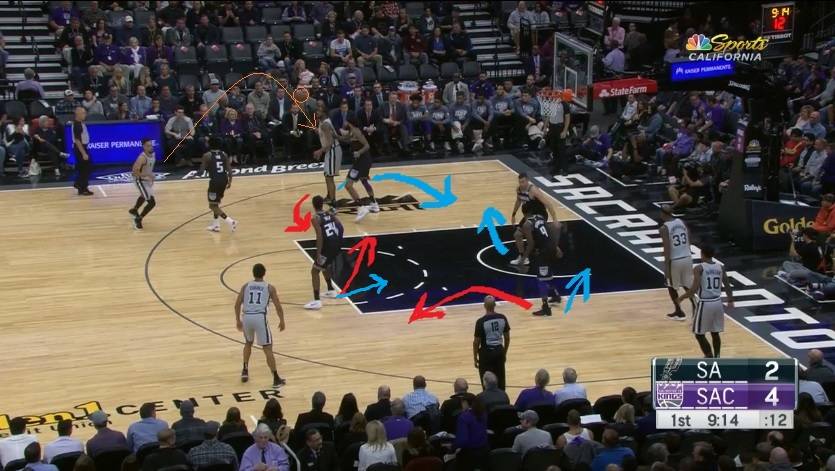 Here we have a much seen offensive set that the Spurs are using this season. We have isolation on the left side of the court for LaMarcus Aldridge. He likes to receive this entry pass on the Karl Malone spot (6 feet away from the low post spot), just because he have a fear mid - range jumper if he decide to face up his defender.

If we take a look at the defense, we can see that the Kings already know whats going on and what they need to do. Cauley Stein is already close to LaMarcus because he knows that he can make that jumper, Buddy Hield is on the passing line and on the free throw line ready to help if there is penetration towards the middle of the paint. If we take a look at Bjelica, he is under the rim ready to help baseline, but he is standing in a way that he can see both LaMarcus and his defender, preventing that behind the back cut. Shumpert is on the edge of the paint positioned in a manner that he can help either ways:

1. Red Path Situation: If LaMarcus attacks the middle of the paint, Hield will come from the baseline to close that penetration, Shumpert will rotate on the 45° where Forbs is waiting for a pass, and Bjelica will remain in the paint and he will be left to guard both DeRozan and Cunningham that are in the far corner.

2. Blue Path Situation: If LaMarcus roll towards the baseline, then Bjelica is the one to help, Shumpert will take his spot under the basket and Hield will take just one step in to the paint and then he will be the one to cover both DeRozan and Forbes. 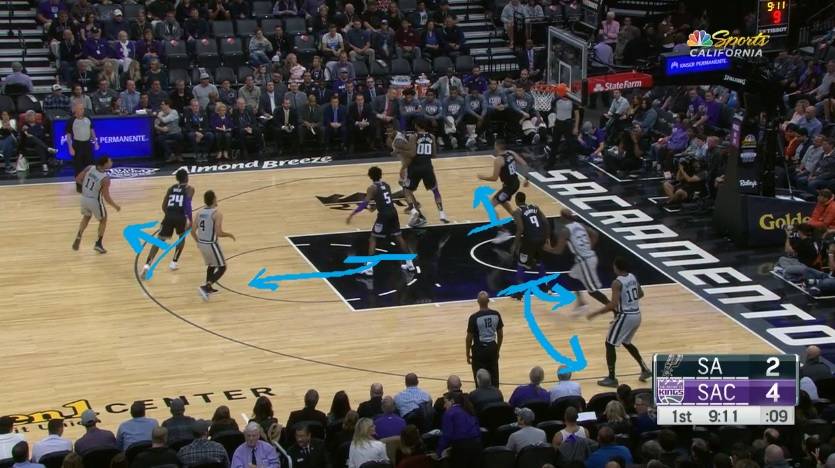 Aldridge decided to back down Stein, so the whole defense moved to close the paint. Defensive decision is made and it is to close the middle of the paint. The decision is good because LaMarcus is right-handed so if he land a drop step in the middle it is a clear path for a jump hook - a high percentage shot. Either way he decides to go, we have Fox to cover the middle or Bjelica to cover the baseline. Shumpert is the last man on defense so he is defending two offensive players. 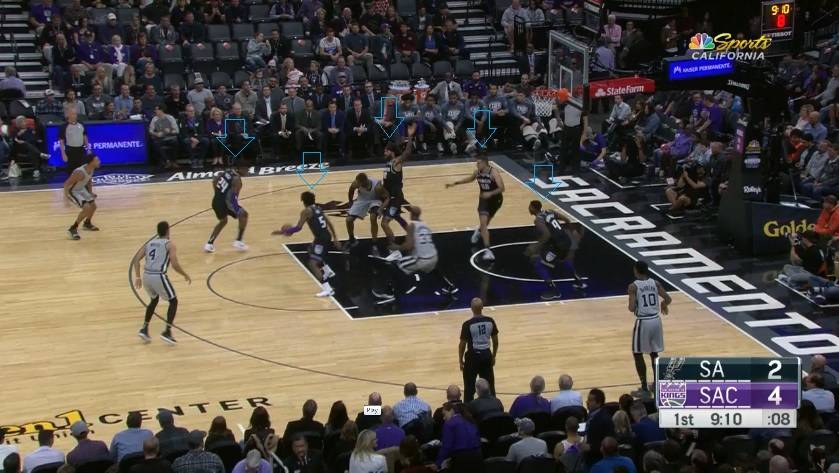 And here it is, Aldridge made a decision to try to attack the middle, he had Stein hard on him and Fox reacted immediately and tried to take the ball.

If you want to learn more defensive rotations and sets, go rent a DVD by clicking on the link below: