Defense, defense, defense. Milwaukee Bucks are playing such a good basketball at the both ends of the floor, and in tonight's match against Sixers they won because they were better defensive team. They are running the floor, they are long and athletic, and thak's to Janis at 5, they can switch almost anything.

Here is a good example of how the good transition defense led to some easy points. 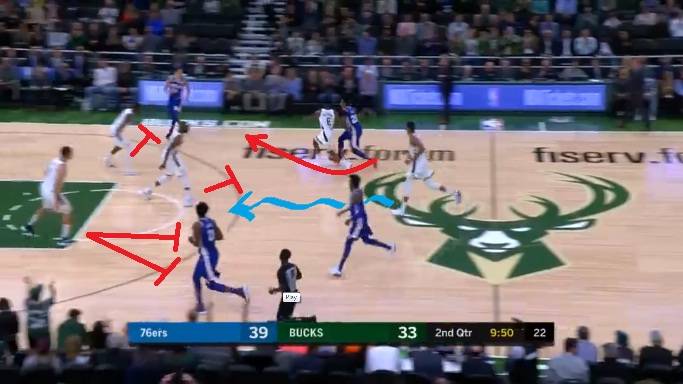 Before this situation, Bucks missed a shot, so Sixers caught the ball and started running the floor. Right away two of the fastest players positioned on the elbows and one on the three point line while Bledsoe attacked the player dribbling the ball and denied him the center of the court. Janis was the one who missed the layup so he stayed to pick up the trailing guy. 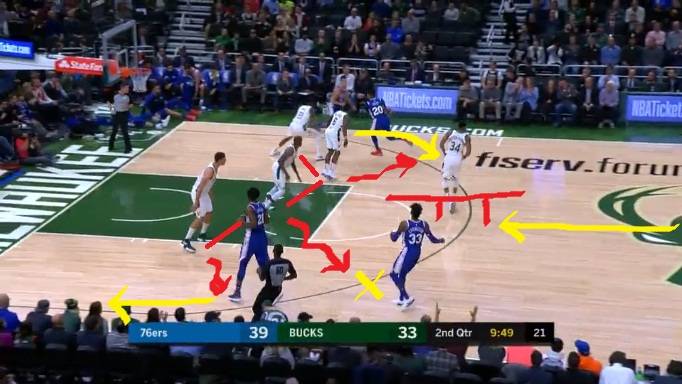 As the ball went to the wing, all the defense moved towards the ball. Janis stayed somewhat underneath the three point line so he can both protect the dribble penetration towards the middle and the trailing player who will come to the Point position. 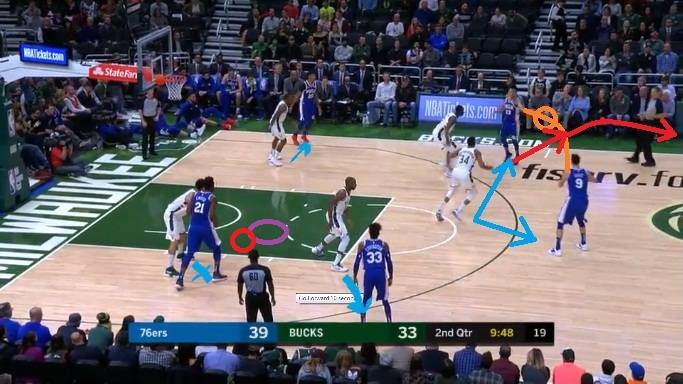 As the Saric is coming from his own half, player from the wing is trying to pass him the ball which is going to be cut by Janis and the Bucks will score some easy buckets in transition. If we take a look at the positions of the defenders, especially The Greek Freak, we will notice that its flawless: 2/3 from the ball and 1/3 from his player and a step close to the passing lane. All the other players are standing correctly.

If you look at the player guarding Embiid, maybe we can argue that he should stand 2 steps inside the paint and one step towards the ball (purple circle) . That is what the books are teaching us. But actually that would be mistake. If you take a look at where Convington is standing, he would be the target of the next pass if the ball came to Saric (if Janis didn't get a steal). So if the ball came to Convington, and the player guarding Embiid stood by the books, Joel would have time and space to position on the brink of the paint (red circle) which is significantly closer then his current position. This way, player guarding him is actually battling him for space.

If you want to learn more about defense, go rent a DVD by clicking on the link below: