How often do you see players, no matter the level of basketball, that are just standing on the court, watching, not trying to follow the action, not opening the passing lane, not filling up the spots. I see it all the time on every level, and as the Coach Chris says, those guys are Not helping, they are just in the way. And it is literal. If your player do not move, it is not that just he is taking space where somebody else can contribute in some way, but the man guarding him can be more active helping other players in defense, and what it comes to is that instead of playing 5 on 5, you are really playing 4 on 6.

The Hoopsking team recognized this problem, and the decision was simple: make a post that will reveal the importance of player movement in basketball. The man telling the story will be none other then Coach C, and the player whose movement is going to be analyzed is C.J. McCollum. Why C.J. do you ask? Because C.J. is the player that moves the most in the NBA (2.69 miles/game).

With all of that said, let's start with the analysis.

First situation that we are going to talk about is a weak side screen.

What is important to say about the screen on the weak side for the player that is in the corner?

1. needs to take 2 slow steps from the corner towards the paint, so the defender is in the level of the screen. This way, geometry is better, and defender is coming to the screen flat.

2. C.J. needs to run close to the screen because that way he will not have room for the defender to pass through.

3. C.J. have an eye on the defender all the time so he can make good decisions. We have Cauley Stein guarding the screener and he is in a good position to deny the pass in to the paint area, so C.J. goes to the point. The real secret here is how fast he travels from screen, and how it made the defender pick up the pace after screen. And in just the right time of defense trying to reconnect, and getting low in a stance, C.J. is making the dribble to the left and getting in the open shot position. Let us take a peek at the slow motion video:

Second situation that we are going to see is the movement on the strong side of the action, but without the screen this time. Coach C insists on good positioning that will open a passing lane for a player that is driving to the basket. Just make a logical move, Coach says, give your mate a second option.

This is pure Read and React basketball. If there is a player driving your way (yellow line) be shore that your player will step on the lane and try to prevent easy basket (blue lane). All you need to do is to take few steps (green lane) and open a passing lane and get an easy open shot.

In next situation the play is going to end with the Flare Screen for C.J. The nice thing about this movement is how passive C.J. looks so defender not fully engaged. Fast reaction and a good movement led to open shot once again.

The whole point of this post is to encourage you to teach your players to MOVE MOVE MOVE. And if you teach them to move with the purpose, then you are very close of making them a solid players.Constant and smart movement will eventually place your players in a better positions then they were before.

If you want to hear more good basketball and moving without the ball from Coach Chris and our Hoopsking team, click on the link below: 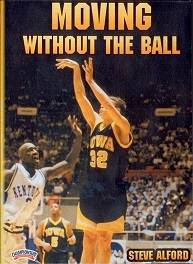