Encyclopedia of Dribble Moves (aka Streets to the Courts)

Jason Otter's Encyclopedia of Dribble Moves (aka Streets to the Courts) is the ultimate dribble moves video.  Jason starts by breaking down each move in detail.  He explains body position and footwork in relation to the defense.  So you will understand how to effectively beat your defender with the move.  Next, you will practice the specific dribble for the move while moving up and down the court.  The final step is to practice the move full speed.  Jason has set you up to succeed by teaching the moves in these 3 pieces instead of jumping to practicing it at full speed right from the start.

Jason covers these dribble moves with variations of each move for a total of just under 40 total moves:

What The Boss Says 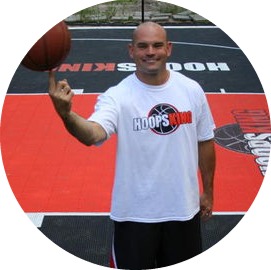 Streets to the Courts is one of the first DVDs we produced and it is still the best dribble moves video I've seen.  Jason did such a tremendous job in breaking down each move and then building up to learning the moves so it becomes easier to actually learn them with good fundamentals.  One mistake we made was calling it "Streets to the Courts" as I think that scared off some people thinking it was a streetball video.  We renamed it Encyclopedia of Dribbles moves because that better reflects the content of the video.  I always recommend this video to anyone who has a guard who wants to really get into beating their man off the dribble.  It's a great video and I highly recommend it.

Retail:
Our Price: Now: $15.99
Was:
Dribble Moves for Basketball Coach Luther Riley is an ex college coach and a four-time Mississippi state champion. His programs are established and grown through an emphasis on skill development and...
R-2668B

Retail:
Our Price: Now: $15.99
Was:
Rental Term Highlights  We only rent DVDs in the USA.  No rental DVD orders will be mailed outside the USA.
R-2940C

(Rental)-35 Street Moves You Can Use

Retail: $39.99
Our Price: Now: $24.99
Was: $39.99
Orlando Magic Assistant/Player Development Coach Jay Hernandez' Pro Scoring Moves provides players with techniques that will help get their shots off, create separation, and score like the top Pros...
BKD-4000C

Retail: $39.99
Our Price: Now: $14.99
Was: $39.99
Pro Scoring Moves 2 is going to give basketball players even more offensive moves to their arsenal.  Watch as Jay Hernandez breaks down some of the most advanced offensive techniques taught to...
BKD-4000F

Retail: $39.99
Our Price: Now: $9.99
Was: $39.99
1 on 1 Wing Separation Moves featuring Advanced Basketball Trainer Ganon Baker covers everything you need to be an explosive wing player. The video starts out with the necessary dribbling skills...
BKD-4001G