Kings are good this season against all odds. On the paper, everybody else was suppose to be better, but that`s the thing about this game...It is not played on the paper.

Kings took a win on the road against the Heat by 123 - 113. And how they won? By running. In the first 15 minutes of action, Kings already had 15 points scored in transition. And it was not all about running. They read the floor, they saw all of the switches, and took the advantage of the matchup`s.

Here is a breakdown of one of these transition plays:

Every good transition offense starts with the good rebound and with running the floor the right way. Cauley Stein caught the ball and everybody else started doing the right thing. Bjelica and Hield went away from the ball and opened a baseline, Fox stayed on the free throw line to pick up the ball, and Shumpert glided backwards just to give another first pass option. 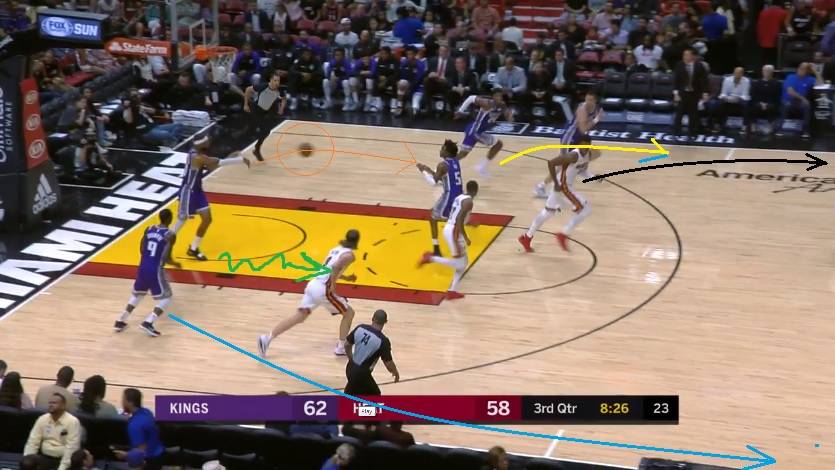 Fox was the one to receive the first pass, Shump started running along the right sideline. 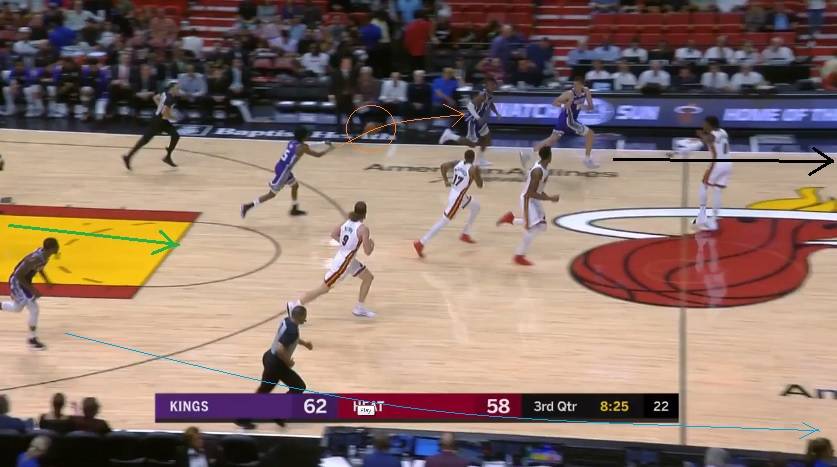 Hield was open for the next pass and here we see that Bjelica is in front of him and that there is a player that is already prepared for defense. Caulie Stein took the middle of the court rut as a trailer. Because of the defense, this is not primary counter attack and there are no easy points opportunities. Nevertheless, because of the good and fast running we will have defense which is not positioned the bast way in terms of matchups. 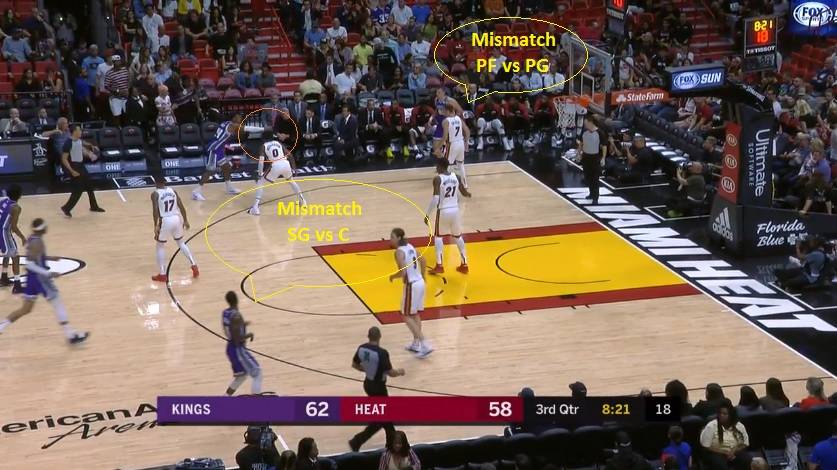 In the left corner we have Dragic as a Point Guard guarding Bjelica who is a Power Forward, and on the other side we have Olyniyc as a Center defending Shumpert who plays Shooting Guard. 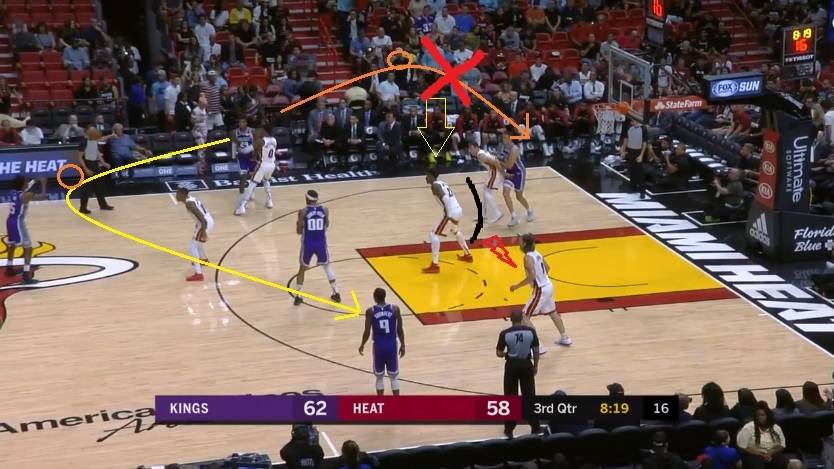 The first idea was to give the ball to Bjelica on the low post, but Dragic is playing a good defense by putting his body in front of Nemanja. If he stayed behind him it would be easy to make an entry pass inside the paint. This way, the only option is a lob pass that is not so secure as the better option, and the other factor that is increasing the danger of turning the ball is the good positioning of Whiteside. The decision is to get the ball to the other side to Shumpert. 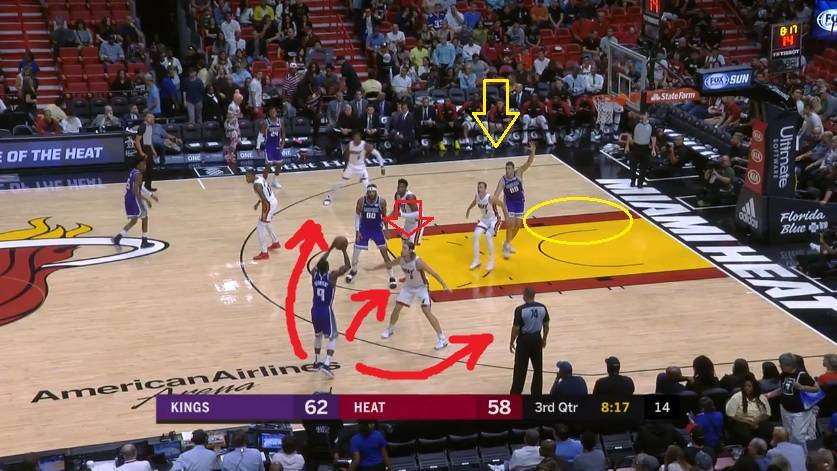 1. The lob bass to Bjelica wich is now more secure then the first one

2. Drive right side and try to outrun Kelly, drive left side with the same idea or play pick and roll with Caulie Stein. 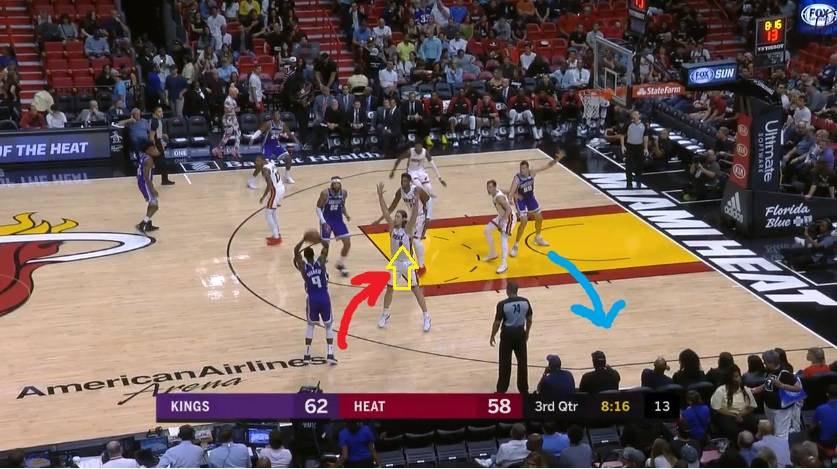 As he swings the ball for a pass, Olyniyc jumps! The obvious occur next. Shumpert chose to penetrate left side. 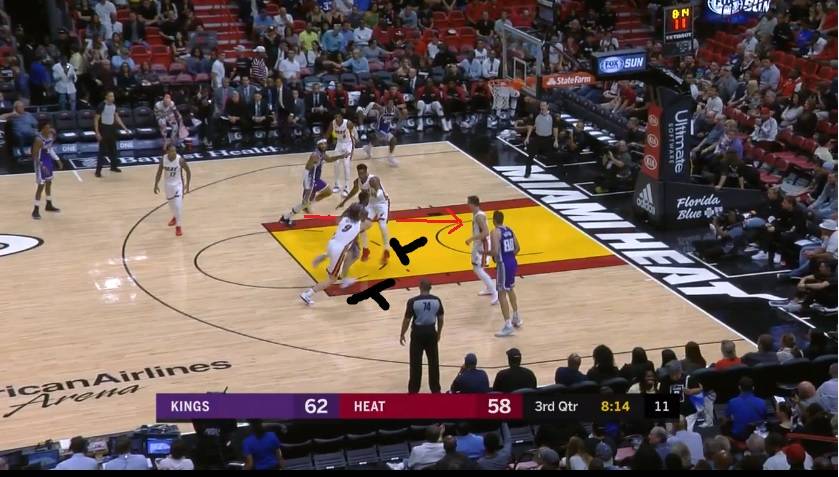 As he passed by Kelly, Whiteside had to close that lane and Caulie Stein was alone under the rim. 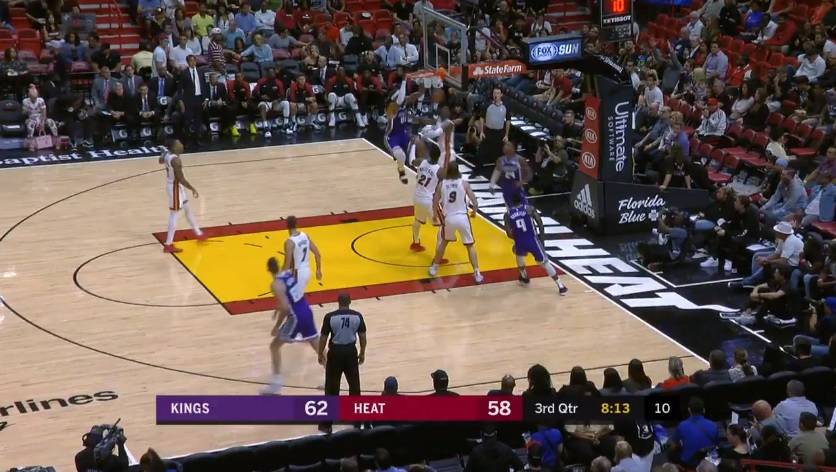 This action is showing us all the benefits of running the floor. Even though the team did not score easy points right away, they had some good options to make some good plays, they were patient, they recognized what they needed to to and it ultimately lead to some easy points.

If you want to learn more about transition basketball, go rent a DVD by clicking on the link below: