What is a Free Throw or Foul Shot in Basketball ?

Free Throws or fouls shots are attempts from the free throw line that score points for teams by making the shots. A successful free throw counts for 1 point.

How Many Free Throws Do You Get in Basketball?

The type of foul will dictate how many shots the shooter will get to attempt.

Shooting fouls occur when a player is in the act of shooting. If a player is shooting and is fouled by a player they will be awarded two or three free throws depending on where they took the shot from - inside the 3 point line or beyond it.

A technical foul shot occurs when a referee has called a technical foul - typically because a coach or player has cursed at a ref. These can be 2 or 1 free throw attempts depending on the type of technical foul that occured.

An offensive foul is committed by a player on offense typically with the ball. For example, a charge foul, where a player drives with the basketball to the hoop and runs into a defensive player committing a charge. This is called a player control foul and the other team will NOT shoot free throws. This is true at the NBA, college, and high school levels of basketball.

How to Become a Great Free Throw Shooter

A good free throw scorer is a player who has all of the features described above. His technique is flawless and the mind always in the right place and he trains smarter than others. He is aware that he is not perfect, but that this is one of the most important segments of the game.

Good free throw shooter has developed his routine. Every time he approaches his shoot the same and every time he thinks about the same things. Routine can be pretty simple, like a certain number of dribbles before the shoot and something like touching your shorts. But it can also be something that is not visible for others. While you are feeling confident while doing it others don't have to about it and you shouldn't care what is their opinion about it.

Because they do not properly practice free throws. It used to be sometimes believed that it was enough to just stand on the line and shoot as much as possible. Today, science clearly shows that this method is wrong. Because the game conditions are different. During the NBA game, often the free throws are taken when the player is tired and when the pressure is high. While in practice players are not challenged, they are just repeating the same movement over and over without any big purpose and transfer to the game. That's wrong. That's why it often happens that someone is great at practice and bad when it is the most important, in the game.

How to Practice Free Throws

Often players say they practice free throws every day but do not see the result. Why is it so? Because they do not know how to do it right. Because they're shooting without thinking and without a clear goal.

Very interesting is that from the total number of points 20-25 percent are scored from Free Throw line and during the practice only from 5-8 percent of our shooting time we spend of free throws.

Free throws should be practiced in a game like conditions and this is not an easy thing to do. Experienced coaches know how to play a loud sound during training that interferes with the shooter (as fans during the game) and makes the players run sprints before each free throw( so that he is shooting with a high pulse, just like in the game).

There is no specific number that is sufficient on a daily basis. It is sometimes better to make 10 free throws in game-like conditions of the 1000 game that do not have a transfer to the game itself.

Coach Jay Hernandez is an NBA skills coach and he helped several pro players to become better shooters. Now you can also learn from him. Jay Hernandez covers all the essential areas you need to become a great free throw shooter. 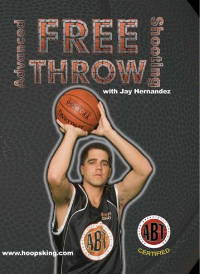 How to Become a Successful Free Throw Shooter

Even if you do not have a trainer or coach who pays a lot of attention to free throws, you can significantly improve them on your own. Have friends trash talk you while shooting or use loud music you don't like on your phone.

Before each shot, you have to run from the basket to the basket as if playing a fast break and then try to score the free throws.

Visualization is also a good trick, imagine yourself in that role. You are shooting in the last seconds and for the win, try to feel every part of your body and every feeling inside of you. It is important to make your visualization as realistic and vivid as possible. Try re-creating important details of your free-throw setting (for example, practice and game atmospheres) in your mind’s image.

When you are alone in the field, practice your mind so there is nothing in it except you, the ball and the basket. If you feel you have trouble with handling pressure in competition, try to imagine yourself perform exactly the way you want to under those pressure situations that would normally make you extremely nervous. Once you reach the level that you can turn off all the factors that affect you, you will become a great free throw shooter.

Practicing any basketball skills should be fun and challenging. Players and coaches who are repeating the same drills are decreasing their chances to get better. New generations of players are easily getting bored, so mixing their shooting drills and adding some fun games is must for everybody. Putting a shooter under pressure in practice will help a player deal with the pressure they will feel as a shooter in games.

Maximize your practice time and try some new drills and games. Here are some ideas to stimulate your free throw practices:

"Swish" works on free throw accuracy. Players go to the free throw line and shoot three shots. A point is awarded for a swished free throw that does not touch the rim. No point is awarded on a made free throw that touches or hits the rim, and a minus one point is given for a missed free throw. A player's score is the sum total awarded for the three shots. If the round is tied, another round of three shots is played until the tie is broken. The ultimate goal is to score three points (or "Hat Trick"). Each round starts a new game or you can play a pre-determined number of rounds. When shooting alone, the goal is to score hat tricks or three points.

The whole team starts on the baseline. The drill involves every person on the team going to the free throw line one-by-one and making a free throw. But the kicker is that every time a player misses a free-throw, the ENTIRE team must perform an up-and-back.

There are different ways you can change the drill up depending on the age and skill level of your team. For a youth team, I would only ask that they make one free throw. But for older and more skilled teams, they must make two in a row. So if they hit the first and miss the second, the team still runs and then they try again. The goal is that everybody scores both free throws.

This challenging and exciting free throw game builds confidence to make free throws under pressure. The object of the game is not to get points.

Run the drill at the end of practice to more closely simulate the mental and physical fatigue from the end of a game.

Line up the basketball team in the lane spaces and behind the arc as they would for any free throw attempt. The shooter gets a 1-1 opportunity. Put a realistic score on the scoreboard that you would have in the final minutes of a close basketball game, whatever fits your level.

If the shooter makes the shot, your team gets one point added. If the shooter misses, the other team gets two points added. That emphasizes the importance of each miss. After one shooter is done, rotate until each player has had a chance to shoot on each team.

If you win the game, practice ends on a positive note. If you lose, there needs to be a penalty such as running, push ups, or whatever you prefer to use. Or, you can do the drill again until you win it.

If the game ends in a tie, then have an overtime where only the players who missed the first time shoot.

Some adjustments you can make are:

If the first shot of the one and one is missed, count it as two misses since the player does not even get to attempt the second shot. That would be 4 points for the imaginary opponent.

Start out behind by a few points to emphasize attacking the basket late in the game to get fouled and catch up with the clock stopped.

Run sprints prior to or between the free throw attempts to increase fatigue.

Some adjustments you can make to adapt this drill for younger level teams:

Start out with a bigger lead.

Shoot one shot rather than a one and one each time.

Each miss is only one point for the imaginary opponent.

History of the Free Throw

The free throw was not mentioned among the original 13 rules of the basketball game. In fact, the closest thing was rule No. 7, which stated: "If either side makes consecutive fouls it shall count a goal for the opponents."

The one-and-one free throw is introduced in 1954, which in certain situations allowed for a second free throw to be shot only if the first one is converted.

Who Are the Best Free Throw Shooters in NBA History

Your goal should be to become great and this are the guys you should chase, they have made their living from free throw line and they have proved that it is possible to become free throw machine.

What are Some Free Throw Rules in Basketball?

Can You Hit the Backboard on a Free Throw in Basketball?

What is the Rule if the Basketball Misses Everything?

If the basketball misses everything and is an air ball it is also a violation and the ball is dead. During the free throw attempt the ball must hit part of the rim to be a successful throw or swish the ball threw.

Is their a Rule for the Amount of Time You Have to Shoot a Free Throw in a Basketball Game?

In NBA, College, and High School a free throw shooter has 10 seconds to complete the shot once they receive the ball. This basketball rule is rarely called as most basketball players shoot well before 10 seconds.

Why a Shooter Should Have a Free Throw Attempt Routine

Here's an example of a simple routine.