How to Coach Basketball 101

On the outside looking in, basketball is a fairly simple game. Each team runs up and down the court, looking to either put the ball in the hoop or stop the opposition from doing so. The thought that game is one of the easier to play would probably lead someone to believe that coaching basketball would be easy as well.

However, neither could be further from the truth, and even more so for coaching basketball. It is filled with numerous movements, styles, techniques, and communication factors that go into teaching others the game.

With that being said, if you are new to basketball and are looking to step-in to a coaching role soon, there is a way to simplify the game and still teach the right way to play. The key is to teach the fundamental basketball plays and core values of the game, all while keeping a level-head. 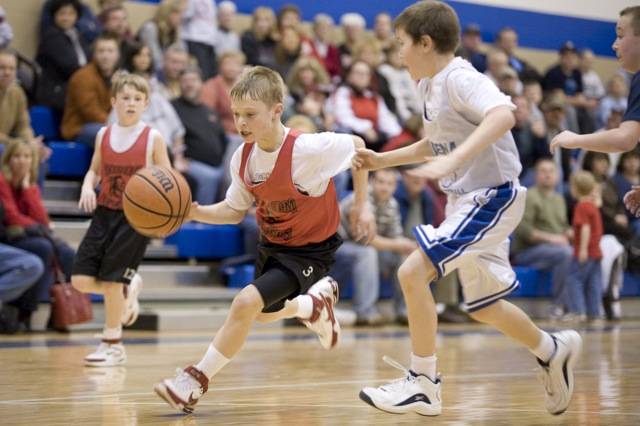 The Fundamentals of Basketball

Yes, basketball is a difficult sport but by focusing on the fundamentals. The fundamentals consist of several of the key components that make basketball the incredible game it is. This actually goes back to those simple ideas about basketball – scoring and stopping the other team (of course, that is a little too easy!).

Using the fundamentals of basketball to teach the game is not only a good idea, but the correct method for a new coach learning basketball as well. The fundamentals will get the best out of your team, develop their skills correctly, and you will see how much more easily they pick up basketball.

Most think that the first fundamental to learn is shooting and scoring the basketball, but in reality, learning the right movements of offense and defense are the right thing to do.

When I say “movements” I am referring to a couple of key actions players must learn before they can start to understand and excel in basketball.

First, we will take a look at what a few important movements you should be teaching your players on offense so they can learn the right way to play basketball:

How to Teach Offense in Basketball

Spacing on offense is something a new coach should be preaching to his team. The idea of spacing is what makes everything go for a team. Teach your team that coming back to the ball every time is not going to help them or the team in any situation. There are only really a couple reasons why two players should be near the ball handler at any time, so making sure the team knows to space out is huge.

Spacing is hard, but coaching spacing is not too difficult. When relaying this to your team, focus on just a couple ideas, with the first being “Be opposite of the ball.” This means that unless you are making a basketball play, you need to be on the other side of the court as opposed to the basketball. For example, if the ball handler dribbles to the left side, you need to make a basketball play to get to the other side of the court. In the same regard, if the ball is at the top of the key, the players need to be on either wings and be ready to move as the ball does.

The second fundamental to learn is how to correctly pass the basketball in order to facilitate the offense. While passing the basketball at an elite level is one of the most difficult things to do in sports, teaching players the basics to passing will allow them to make up for below-average dribbling skills younger players usually have.

When teaching passing, there are two types of passes that the building blocks: the chest pass and bounce pass. The chest pass is one that is sent directly through the air to another player, with the aim to hit your teammate in the chest-area (hence the name). This type of pass is most common when going quickly, or in order to get the pass off as fast as possible.

The chest pass then sets up players for the all-important bounce pass. A bounce pass is exactly what it sounds like: a pass that is thrown off the court to get to another player. These types of passes make it difficult for defenders to tip the initial pass and can give better angles for passes. By teaching that chest’s are for quick-and-clean passes, while bounce’s are for harder, precise passes, the team will be able to move the ball more easily.

Finally, on to the “complex” part of initially learning basketball – dribbling. The dribbling of the basketball is the way the ball is moved up-and-down the court, and is definitely one of the most important fundamentals.

The most vital part of dribbling is ball security. Your team can’t score, meaning they can’t win, if they keep turning the ball over. You absolutely have to teach your team to protect the ball with the opposite arm they dribble with in order to not allow the defense to reach in and swipe the basketball away from them.

How to Teach Defense in Basketball

In the same way, there are several defensive movements and abilities that can be used to teach basketball in a simple way. Here are the most important tactics to teach on defense:

Yes, you read that right – spacing is not only the most important offensive movement, but defensive movement as well. As the offense moves the ball around, it is important to not only make sure all the opposing team is covered by your defenders, but that they are also not right up next to their opponent either and able to keep track of both their person and the ball handler.

For the defensive spacing, we use “hand-guns.” The hand-guns rules are applies when you are able to keep a hand pointing at whom your guarding (with an eye on them) and another hand pointed at the ball handler as he moves around or passes the ball (with another eye on them as well). By staying close enough to your defender to stay on them, all while also keeping and eye on the ball, the defensive spacing spacing will be where it needs to be.

After spacing comes help defense, which acts exactly how it sounds. When the other team’s ball-handler gets by your defender, having help defense is imperative to try to not give up a basket.

Help defense comes from the other four defenders of the court, all of which are given two options as when they rotate over to give help defense: Half or full commit. Nearside defenders should give a “half” help, where they go at the ball handler like they will be covering him and jump back at their original defender, while the opposite side must become full-commit defenders, making the ball-handler pass the ball across the court.

This might seem a little trickier than advertised, so just stick to the basics: Help a little or help a lot. Help a little if the person you are guarding is close to the ball, help a lot if they are far and make the ball handler pass it.

This tip isn’t just for coaches, nor just for players – but for everyone involved.

Basketball is an incredibly tough sport that requires playing both sides of the ball and having a large, exhausting workload. What that means is the game won’t be easy for anyone. You have to work hard, diligently, and consistently to become good, whether you are playing the game itself, or teaching it from the coach’s box.

There is no denying it: basketball is hard. Playing, coaching, teaching, and in every other role, the sport is a tough one. But stick to the fundamentals, along with having players work hard, and picking up the game will be easier than previously thought.