The Princeton Offense is the perfect offense for a team that excels at working together. When Coach Pete Carril was at Princeton University he developed this offense to focus on modern aspects of the game: creating space for shooters and utilizing post play opportunities.

This basic foundation of this offensive system involves every player accurately cutting, screening, passing, and shooting; being able to do these four fundamentals would allow your team to execute the Princeton Offense at a high level. Essentially, each player should always be trying to help their teammate out. One key is having a center player that can be a double threat of scoring and passing out of the post position.

Carril’s offense is complex and requires many reads depending on what the defense does to guard you. In order to properly break down each segment, we’re going to do a four part series focusing on the main points of understanding the Princeton Offense. In Part 1, we’re going to cover in detail the strengths and weaknesses of this offense, what type of team would be successful running this offense along with the basics of getting the offense set-up and started.

From there, the other parts will take a deeper dive into the different variations of this offense and even provide you drills to use. When you’re done reading this series, you should have a better understanding of the Princeton Offense and if it’s right for your team.

Strengths of the Princeton Offense

Weaknesses of the Princeton Offense

The Princeton offense is built for teams that have good shooters and fundamental basketball players, especially in the post. They don’t necessarily have to be athletic, but must be able to do the basics very well because the offense is looking to create scoring opportunities from executing fundamental offense principles.

A team successful with Carril’s offense must be able to read the defense and make offense moves accordingly. If each player can understand what they’re looking for out of their offense and are good decision makers then there’s going to be an open scoring opportunity every trip to the offensive end.

Getting The Princeton Offense Set-Up

To run the Princeton Offense, you generally start with two top guards, two forward players on the wings, and one low post (center). Depending on your team, you can decide what type of players fill these positions.

Getting Into The Princeton Offense

The most common way to start this offense is with a pass from the top guard to the wing. With the top guard position, you want these two players to have the right spacing with the guard without the ball a step behind in case the guard can’t pass to the wing and has to swing the ball to the other side of the court.

Once the top guard passes to the wing, they will ball cut down the middle of the paint and go to the opposite corner. When the guard is cutting be sure they’re looking because their defender could take their eyes off them and they may be open for an open shot.

Essentially, every player is going to be moving with the pass. As the guard is cutting, the other top guard is inching to the middle of the court.

The wing with the ball will pass into the low post. With this pass, there are three reads for the wing to make:

Relocating to the corner and cutting for a return pass both should lead to a shot for the wing player. However if they go and screen for the guard, there’s five options off this screen:

If none of these options are open then you should have an open teammate across the court. There are two ways to get the ball to the other side of the court - your center makes a cross court pass out of the low post or your guard at the top swings the ball with a pass.

Low post passes to wing on the other side. This should especially open, if their defender is trying to help on another player.

Low post passes to the corner. This is another situation where your teammate should be open if their player is helping on defense.

Top guard swings the ball to the other wing. By swinging the ball, the wing on the other side should options:

Option #1: Open shot or drive the ball and pass to the corner if defense helps

Option #2: Swing the ball back for a dribble hand-off

If ball is swung to the other side of the court by a pass from guard, the passer goes down to screen for the center, or low post player. This screen moves the center to the top spot where they will receive a pass then dribble towards the corner guard who should be coming towards them for a dribble hand-off. The center gives them the ball and they come off looking for a shot. - Minute Marker

Option #3: Go backdoor if swing pass is being denied

If the forward going back door isn’t open, the corner player should move up for the pass. The forward stays on the block to post up looking for an entry pass from the wing.

Since the forward stays to post up you have to make sure there’s no one else down low. This shouldn’t be an issue because when the ball goes to the other side of the court your passer always screen for the center.

There’s so much to learn about the Princeton Offense that it’s impossible to do in one article which is why we are doing a four-part series solely focused on this complex offense! 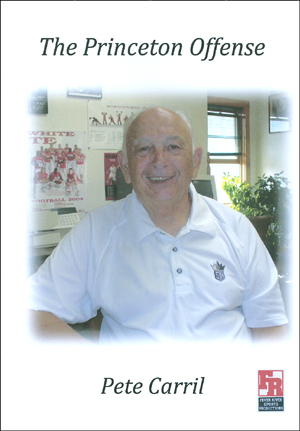 If you want to learn more about developing this offense, continue reading the rest of our series and be sure to check out  Pete Carril’s Princeton Offense 2-disc DVD set. It goes into incredible detail with excellent demonstrations to help you instruct your players on the court and make your game plan according to your team.