How do you get better at something? How do you advance and become a better you in any way possible? What do we really teach our kids when they come to practice basketball? Here is a little story.

How do you raise your kids? It is widely excepted that the best way to teach your kid something is to let them do it how they think it is the best way, and when (or If) they make a mistake, we talk about what they did and why it went wrong. We must newer STOP THEM from taking their own actions, because it will take away their ability to MAKE their own DECISIONS. We will shut their creative side, we will make them stop asking questions and it will resolve in getting a kid that is scared to do anything because it is afraid of not doing it wright. Not doing something in time will get to not doing anything, and that is a dead end if we talk about a  progression of a human being.. Now, read this once again and use the word player instead of kid.

These are some of the questions that I hear from many coaches these days, who are teaching our kids basketball?

4.What kind of offense can I run?

.... these and many more questions my basketball mind just cant understand. Why? My basketball ideology is: MAKE THE RIGHT PLAY NO MATTER WHAT. And how will you teach them this? You will teach them by giving them freedom when they are young, analyze if those actions were good or not, correct the wrong  and improve the good, support them, encourage them, they will grow to be fine basketball players.

There is a new basketball system that is becoming popular among the coaches called READ and REACT. There are no plays and no patterns, no 4 players standing and watching 1 on 1, it boosts teamwork, intuition and the knowledge of the game.

Here are some top Read and React plays done by pro players, just to make it clear what are we striving for.

Here is a play done by LeBron. As he gets the ball at the Point , Korver saw that he had open space on the 3 point line and he showed his hands that he is open. At that same moment, his direct defender who felt a sleep and the player guarding Zicic, both went on him knowing he is a sniper, and Zizic was left alone in the paint. There are 3 Read and React situations:

1. Korver saw that his man is not near him so he asked for a ball to shoot

2. Zizic saw that both Lopez and Randle are on to Korver so he went in to the paint

3. LeBron turned towards Korver and showed the ball, but as the 2 defenders were on to Korver , he gave no look pass to Ante for easy dunk.

Read and React can be used both in team and 1 on 1 situations. Here we have James Harden attacking Antony Davis. As he approaches Davis with the full speed drive, first step that he took on that Euro step was slower so he can see the reaction of the defender. As Davis took the bait and moved in the same direction, Harden stepped across on the other side and made an easy lay up. If it was the other way around, and he went directly on Davis, most probable outcome would be that he would be denied on the rim.

And as our final PRO example, we will show you the perfect team offense run by Greg Popovic and the San Antonio Spurs.


It all looks easy when the PRO's are doing it, so now we will brake down some of the plays and explain the Read and React to the detail.

The action starts with the player making a pass on to one side, and that side becomes active side. 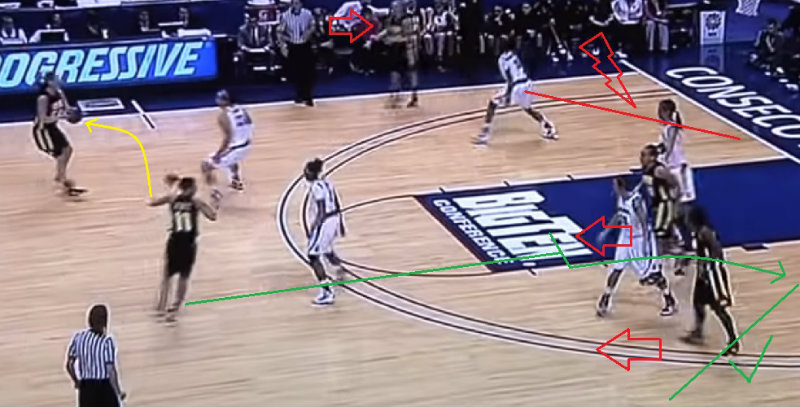 As there are 2 players on the ball side, the player that gave the first pass must Read the game, and conclude:

1. left corner is off limits because there are 2 players already on that side - if there is a third player there you loose good offensive geometry, nobody on that side can receive the ball

2. I should open a passing lane by running the middle of the court - give a passing option to your players

3. there is a Center coming on the elbow, that could lead to a pick and roll, if I don't receive the ball I can screen for him and make a defense do some extra work, maybe even get a switch

4. after that screen I need to go to the right corner and make a good offensive geometry - option for the swing the ball offense, make the extra pass and get an open shot from the corner

After first set of movement ball ended up on the wing, and the 2 players ended up near the ball, one on the point and one on the elbow. 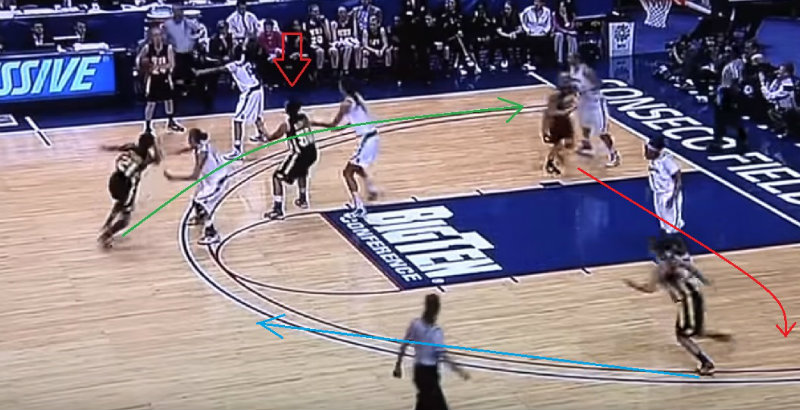 The right things to do are:

1. The player from the point should open a passing lane by running in front of the player that is on the elbow (green line) - open space for pick and roll and make another passing option for pick and roll, if the ball handler  get's hard hedged and there is a need for a pass in the corner

2. the player that was in the corner on the ball side to switch sides (red line) - free the space, keep the defense on the move- it is not a mistake if he stays there but then the player from the point needs to go to the opposite corner

3. the player from the passive corner to climb up to the Point  (blue line) - open passing lane if there is a switch on the screen and we have advantage in the paint, it is better to go for a direct pass then the lob over the switching center

After this set of movement we have a pick and roll situation. 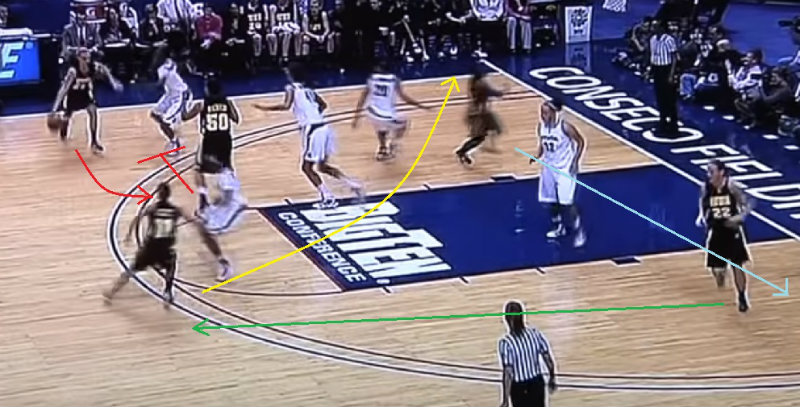 The good moves on this setup are:

1. The player on the point should run to the ball side corner (yellow line)

2. The player from ball side corner should run to the opposite corner (blue line)

3. The player from the passive corner must go towards the wing/point position to open the passing lane for the ball handler

After pick and roll, the point should continue movement through the paint, the screener must role to the basket with the hands up. 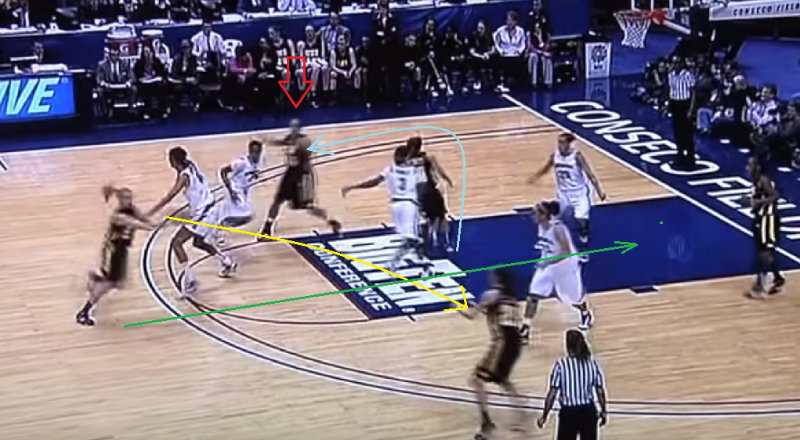 The guard that was cutting through the paint before pick and roll will climb to the wing on the opposite side of the ball. 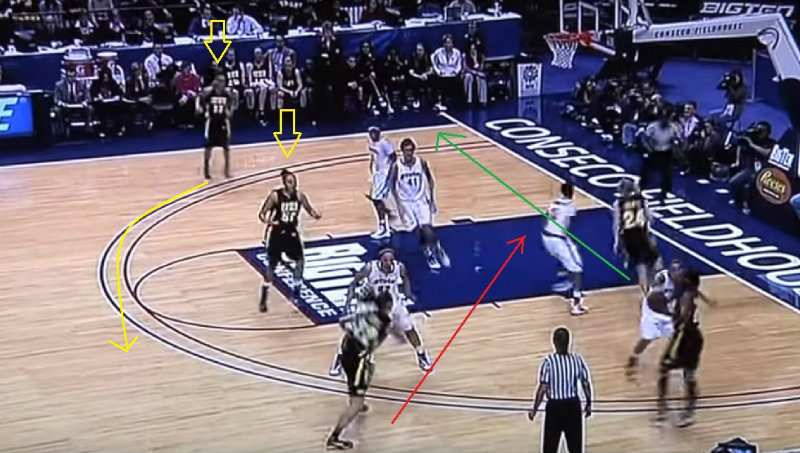 If the ball goes to the corner, right plays are:

1. player that made the pass needs to cut (red line) because there is a Center climbing to the high post

2. the player that is on the low post needs to go to opposite corner (green line) to free space for the cutter

3. the player on the wing of the weak side of the action must climb to the Point (yellow line) to give a passing option for the player with the ball

If the ball goes again on the Point position, there is a option for another pick and roll, so the player that gave up the ball will switch sides. 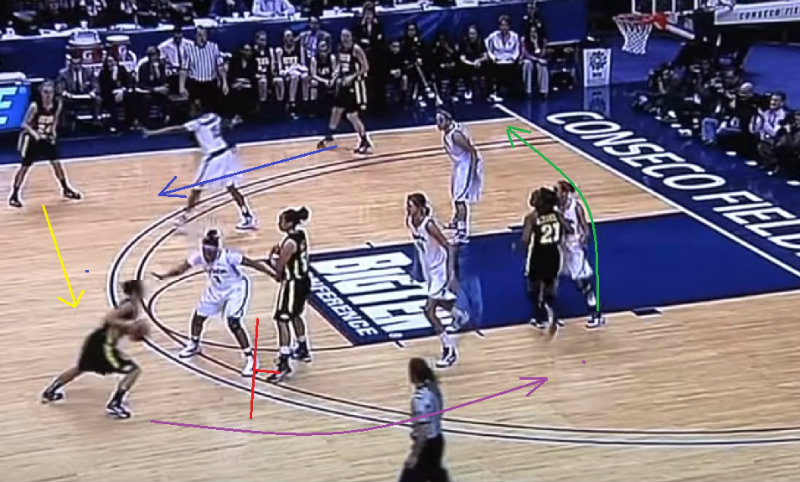 1. We have a pick and roll situation where defending Center was late to do anything because he was on a constant movement and watching on cutters

2. our guard with the ball was in the act of movement while receiving the ball so his defender was a bit late

Both of this actions lead to the miss match that lead to open shot and easy points.

If you want your players to understand you better, you can buy some of our Coaching Boards by clicking on a link below: 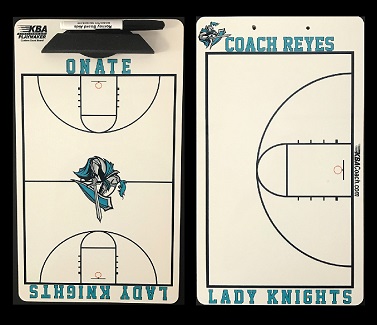 If you want to learn more Read and React offense, go rent a DVD by clicking on a link below: 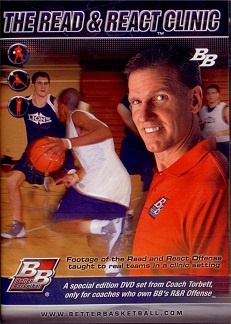