Before I explain the possibilities of this baseline in bounds play, I have to put the accent on the individual preparation of every single player in terms of understanding every aspect of every basketball component. In other words, you can draw the smartest action that the basketball world have ever seen, If your player does not understand what it does for him, the play will not work.

Let us analyze this pattern play by play.

Firstly, you have to put your Power Forward and Center on the elbows, with the diagonal position of their feet . The guards have to be positioned somewhat above them and facing the ball.

The guard that is closer to the ball will move first, and he will go horizontally and make a screen for the other guard.

The guard that received the first screen will go outside the screen setter and will move on the second screen made on the elbow by the wing/center. Depending on the reaction of the defense, and the quality of the screens, he will be given 2 options. If the defense is good, the green circle is the spot where he needs to be to receive the ball (in the triple treat position), or, if his direct defender is slow and the opponent center is ither not positioned well or does not switch nor help a bit, yellow line indicates the route that will lead your player to an easy layup. Same goes for our big guy. If his defender switch, and the defending guard “dies” on screen, he can roll to the basket, which is shown by the purple line.

If the D made some quality plays, and our guard got the ball on our green spot, the guard without ball will receive the screen from our second big men and will take place on the opposite side of the court from the place where the ball is. 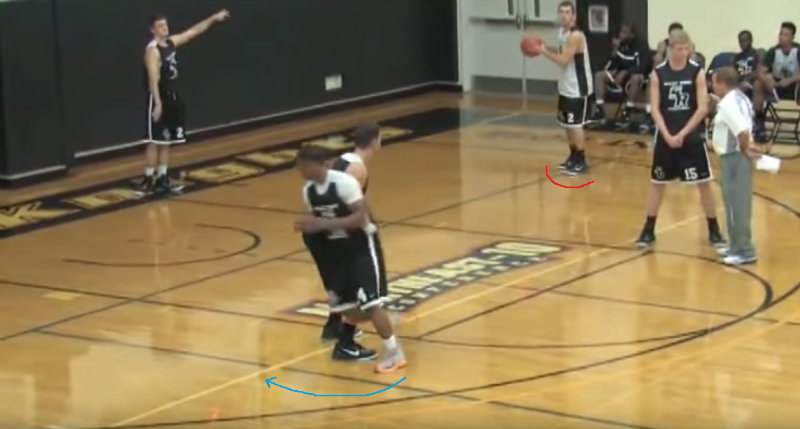 This move is not just making your offensive geometry good, but additionally it gives you option for the inbound pass if the first guard is covered by his defender. Lets mention that there is a possibility of cross court pass but nobody is suggesting that this should be go to move, unless there is LeBron with the ball and Korver in the corner.

Next, the big guys move horizontally, so the player that is near the ball makes a screen,

and roll to the basket afterwards.

Depending on the reaction of the defense, there will be opportunity for the easy layup/dunk, or the other big will be in the position to receive the ball and make the open shoot.

As the variation of the play, after the initial screens between the guards, the one that receive the screen can alter his way and turn immediately to the basket for the easy layup.

The idea of this whole inbound play is to get the defense on the constant move, with the lot of screens that will force them to make a lot of decisions one after another. If the timing of the movement are good, and the screens are correct, every time your player will be given some kind of advantage, that he will or will not take, depending of his skillset.

If you want to learn more Baseline out of Bounds Plays go rent a DVD by clicking on the link below: 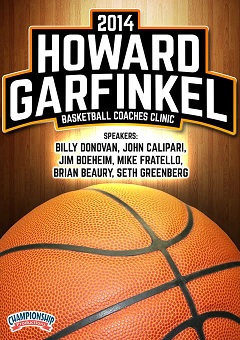