As the modern basketball is evolving, the demand for a better jump shot is getting bigger. As the basketball player progresses in his development, and his game translates to a better basketball leagues, everything is starting to become harder and harder. There is a moment in every players career when he realizes that the basics are not enough and that there is a real need for an upgrade. One of the biggest changes that basketball players experience is a difference in time and space needed for taking a jump shot, and the only thing that can help them is advanced basketball training. The major league jump shot needs to be quicker and it`s often taken in a contact, or after one.

For this occasion we are going to analyze some of the best shooters and their not so easy shots. We are going to break down each and every of these plays so you can notice the little things that are making a crucial changes for those professional players. As a final result our goal is that you as a coach will know exactly what to focus on while preparing the drills for the training.

We will start with the jump shot that Michael Jordan made over Larry Bird, while dribbling the ball through the legs several times.

We are going to start with the preparation move, the inside out dribble that Jordan did, with the intent to make a dribble penetration to the right side. 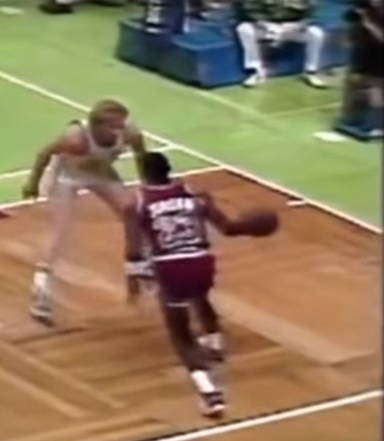 Michael`s right leg went straight ahead in the first act of preparation for the attack. With this move you are forcing the defender to take a step backwards in a parallel stance, and to leave him guessing witch way you are going to go. 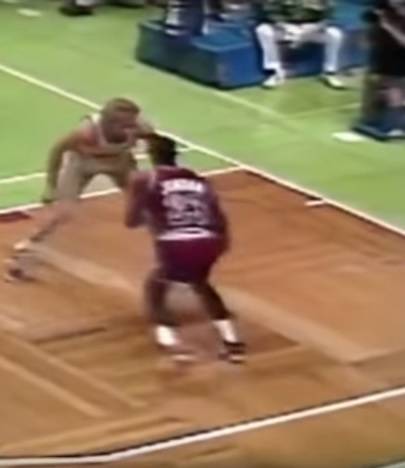 Michael made the inside dribble move in order for Larry to move to his right, and this would leave left side (corner) wide open. Bird was a genius on defense so he didn`t buy this Jordan`s move. He took half a step to protect the paint. 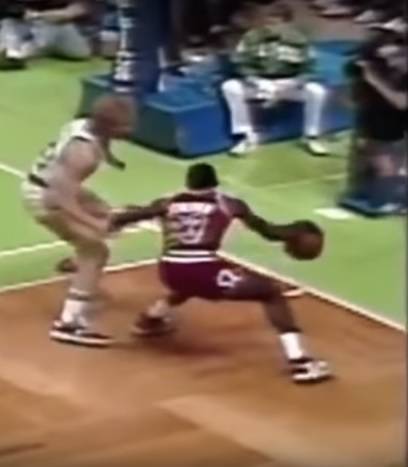 After the previous sequence of moves, Michael was forced in to defensive dribble, and it all looked like a grate job by defender.

After Jordan was denied a path to the basket, and after that defensive dribbling move, 99% of the players would either dribble to the outside of the corner and make a pass to the open man. But not Michael. Instead of going for the "logical" move, he went into another set of dribbles. 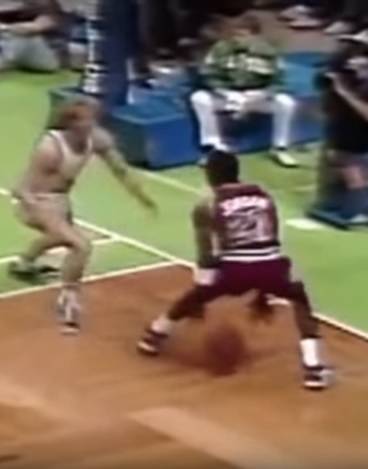 Two consecutive dribbles through the legs done by Jordan were enough to provoke Larry to change the stance and to go and try to steal the ball from him. 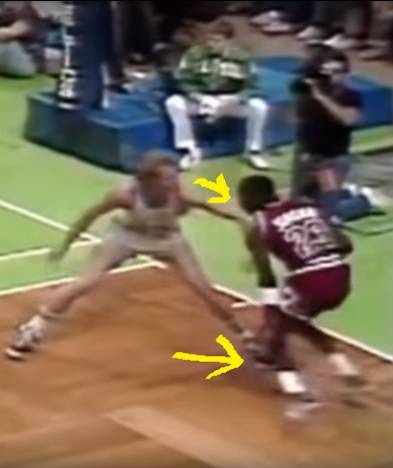 This is a decisive moment. In the moment Larry went for a steal, he opened a path towards the paint. Jordan saw this and took a hard step and attacked Larry`s right side. 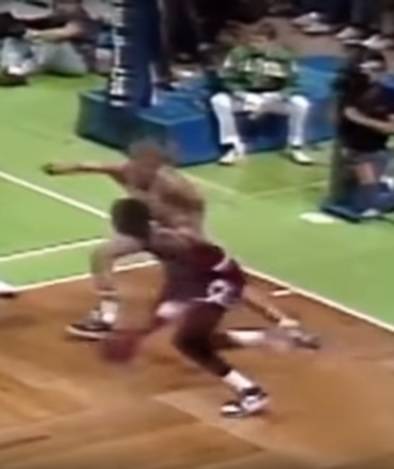 Here we see that Bird is in a bad position with legs spread wider then normal. From this position it is hard to react fast because the defender is off balance. 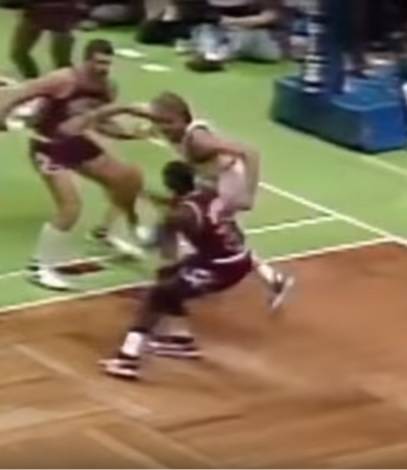 While trying to reconnect on defense, Larry is taking two hard steps, and Jordan is going for the jump shot because he knows that it is hard for the defender to stop in this situation. The quality of vertical jump that MJ had helped a lot.

If you ask me, this is a perfect example of Read and React Basketball. Jordan was patient, he was concentrated and at the end he ended up with a solid position for a jump shot. The move that made the difference is Bird`s steal attempt and Jordan`s just one dribble pull up.

Coach Trey from Hoopsking.com, a development coach that works with Buddy Hield from Sacramento Kings and Avery Bradley from Los Angeles Clippers, is going to help us go trough the details once again.

Next move that we are going to look at is a fade away shot that followed one of the best spin moves that I saw in my life. Paul Pierce is a man responsible for the creation of this grate jump shot.

Before we start to break down this shot, we have to be aware that Pierce was never a fast or athletic player. If you read my article, 6 Ways to Dominate your Defender in One on One Basketball, where I tried to classify players by their art of scoring, I would put Pierce in that Counter Type category, emphasizing that Paul always knew where the defense is, what are their intentions were and where he wants to be in those situations. 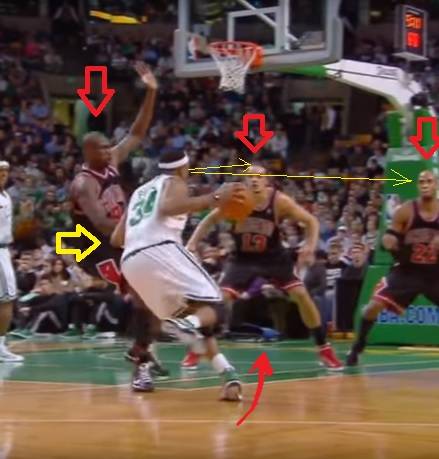 In this picture we see that Pierce can`t outrun his defender. The other thing that we need to notice is the other two defenders that are in the paint area, both protecting the drive penetration line. We can also see that Paul`s head is up high and that he sees that he can`t get to the rim by going this way. The notables are:

1. Pierce is starting to lean towards his direct defender 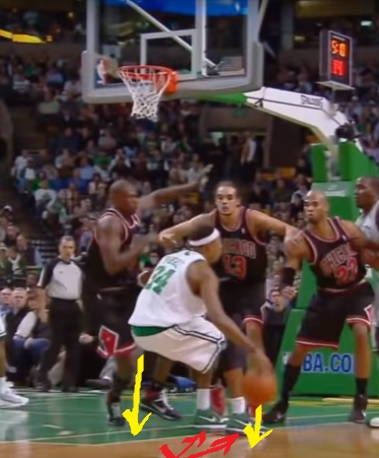 One of the Paul`s biggest quality`s was his possibility to make a full stop in just one step, and all that from running in full speed. In this picture we can see how he stops, how he lowers the center of gravity by almost doing a full crunch, and by doing this he is creating some space for his next move. We can also see how he bumped a bit his defender and how the man guarding him has lost his composure because of that bump. The feet are aligned perfectly, at 45 degrees, from where he can do a spin move to his right. If he stopped with the flat feet, the only thing he could do is take a jump shot.

Take a quick look where the ball is moment before the spin starts. That dribble needs to be hard off the floor, and positioned slightly behind the right leg (in this situation), because in the act of spinning if the ball is in front of the leg or it bounces soft off the wood, the player will not be able to pick it up while rolling to the other side.

In this picture the focus is on the footwork. That first step needs to be really wide, because the wider it is the space created for the next move is bigger. Second thing that is very important is that the step needs to be absorbed with the heal, just to give you that spin ability afterwards. 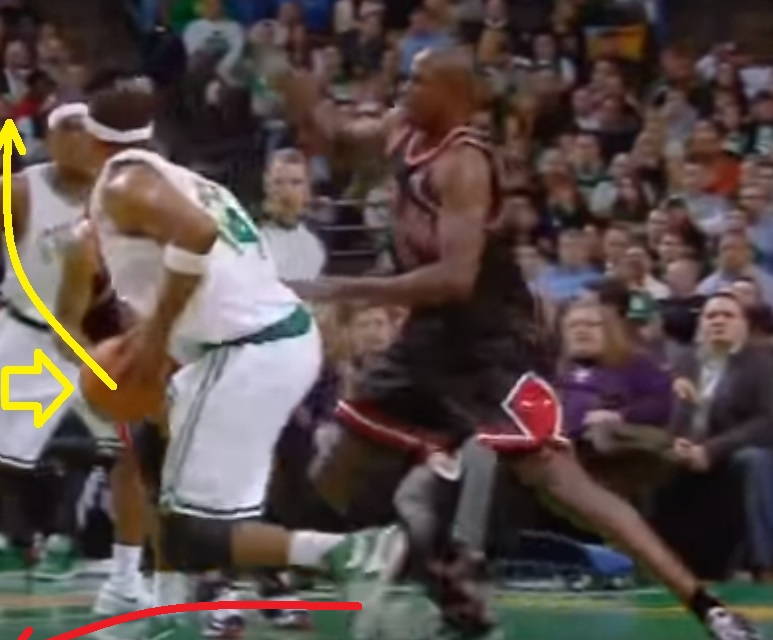 As the spin move is done, Pierce is going in a jump shot motion, and what we must notice is the trajectory of the ball. The ball on his left hip and he is hiding it and protecting it from the defender. 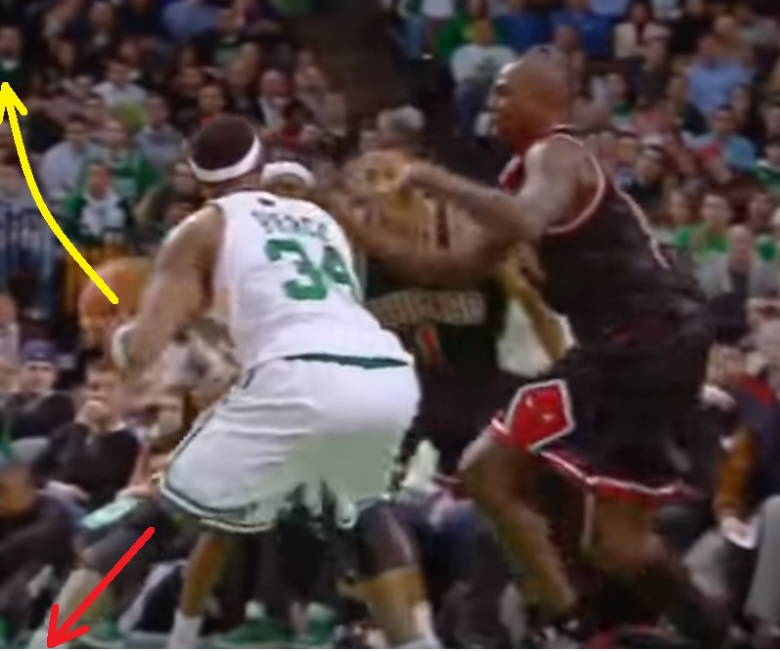 The second thing that we must be focused on is his left leg. Paul notice how the defender has reconnected with him so he is preparing him self for a fade away jumper. The ball is still kept far from the defender. 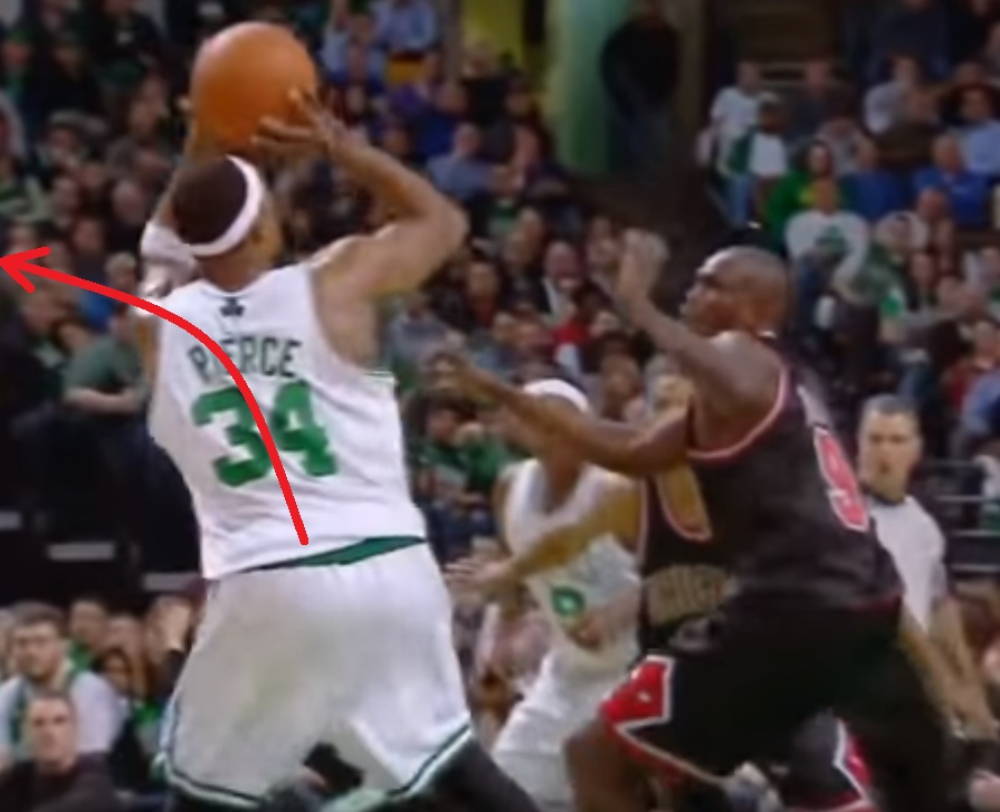 Here we can see how the sequence of the moves created space for Pierce to score on multiple defenders. Even after all these moves, Paul managed to jump high and to keep a good shooting form.

Let us see what Coach Trey has to say about this kind of advanced offensive move. Keep track of the details because only by knowing what is the important stuff you will know what to use for your drills.

Our next move to study is a fadeaway shot. This particular move is used to create space between the defender by jumping backwards while taking a shot. As there are many players that mastered the art of shooting the ball while fading, but for this session we will analyze one of the Dwyane Wade`s jumpers. As always, we will start with the preparation.

Here, we can see that Wade is posting up his defender. What is interesting is the fact that defender has no physical contact with the man that he is guarding even though he is dangerously close to the paint area.

This is something that Dwyane notices too, and based on that knowledge he is planning his next move.

Take a look at his left leg. The preparation move will be the step to the left. 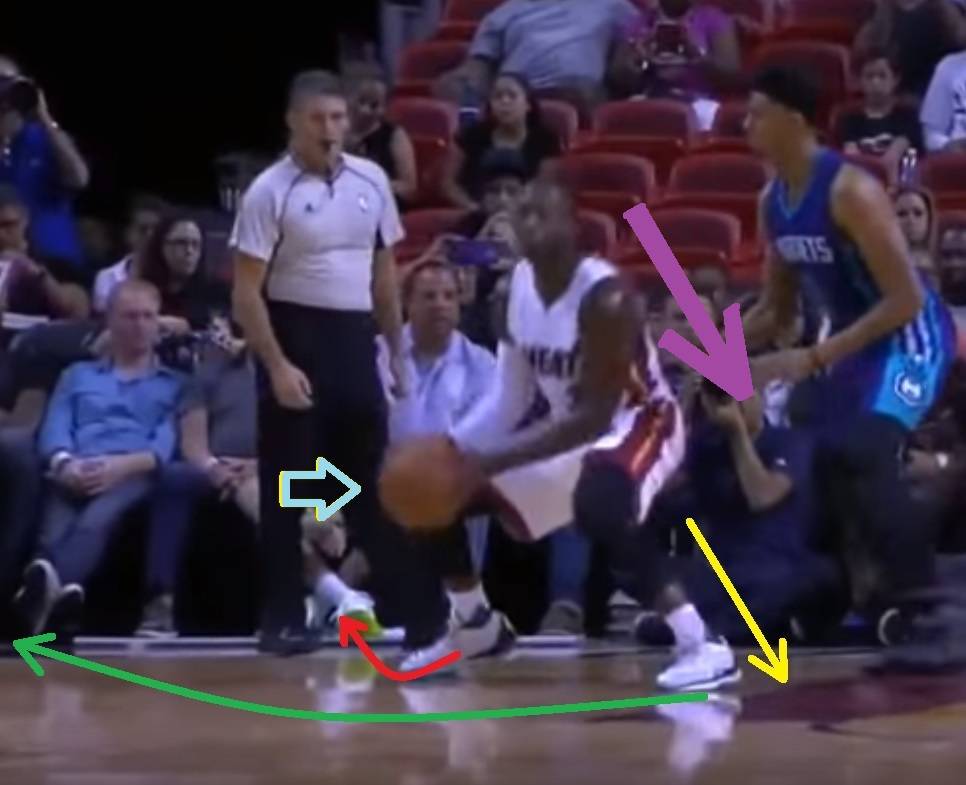 The key points of setting up the jump shot are: 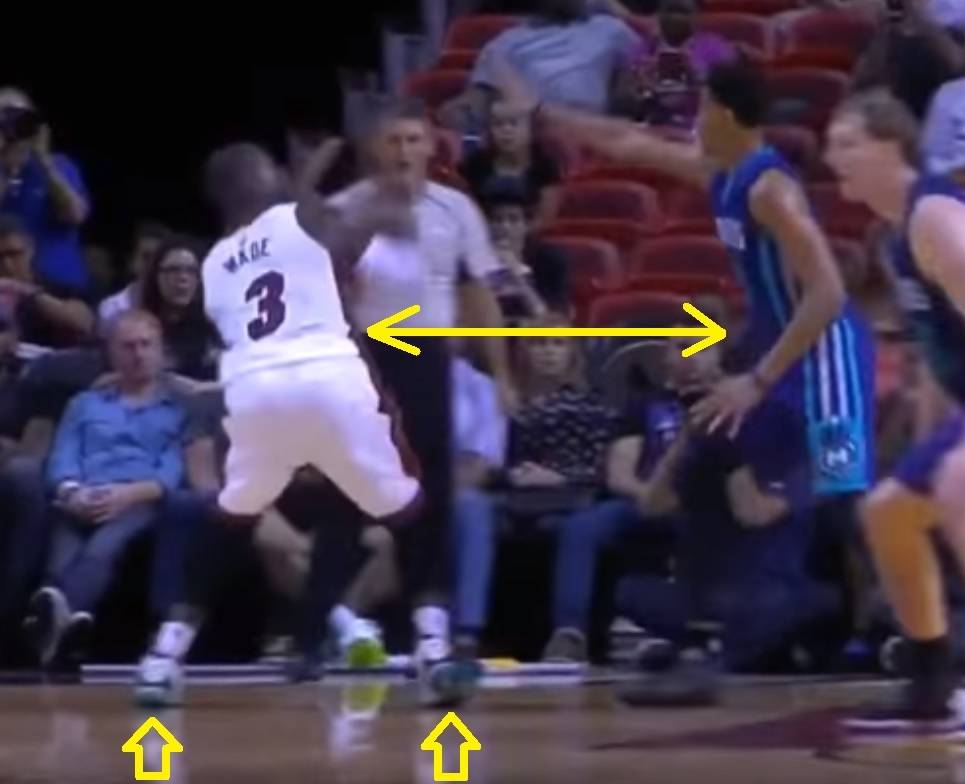 Here we can see the space created between the Wade and the defensive player, and a wide stance from witch the shot will be taken. 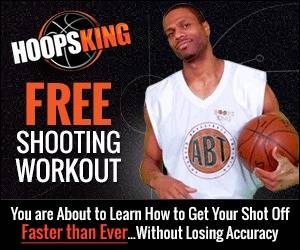 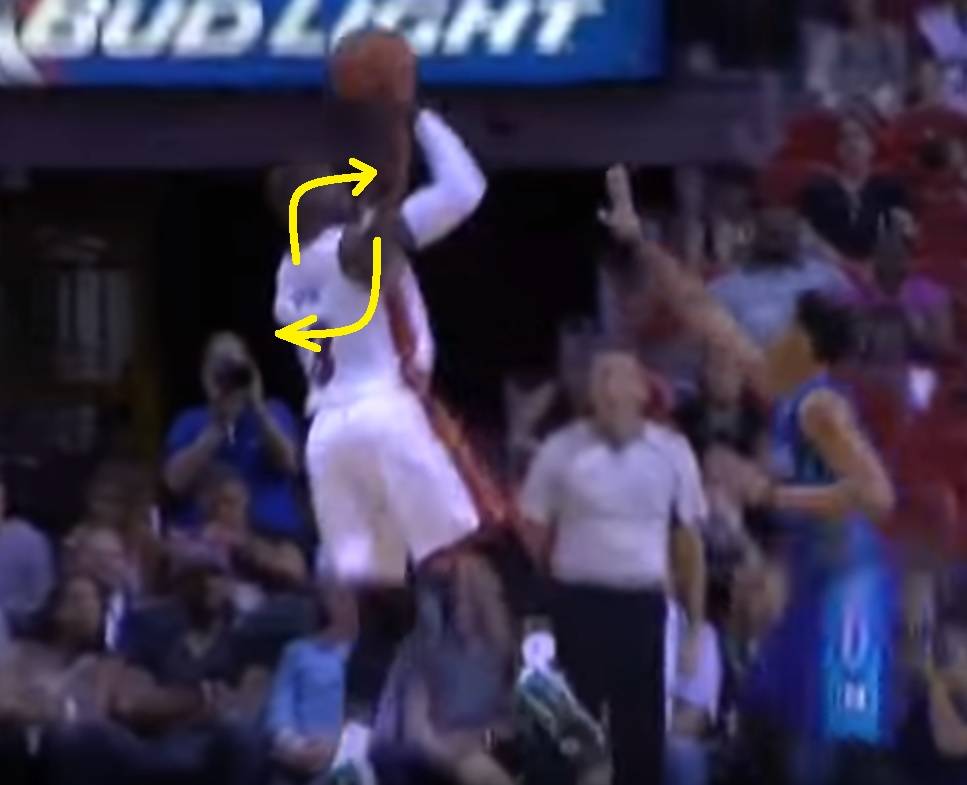 One of the most important things while taking any shot is a form of the body. Wade is rotating his shoulders in a way to face the basket as much as he can.

As this is not the article about shooting form, and you want to read about it more, just click on these next links and they will lead you to our articles about shooting:

Coach Tray will walk us through the video step by step and point out the important stuff.

The ultimate master of the Jab Step jump shot is Carmelo Anthony. Coach Phil Jackson, the Zen Master, called this shot a single hardest move in basketball. If the defender is tight on you, you will chose a side that you are going to attack, you are going to attack with the cross step and take just one dribble, bump a man guarding you, lean away from D and take a shot. This is hard stuff. This is advanced basketball offensive move that needs a lot of practice. Lets see how Melo is using this move. 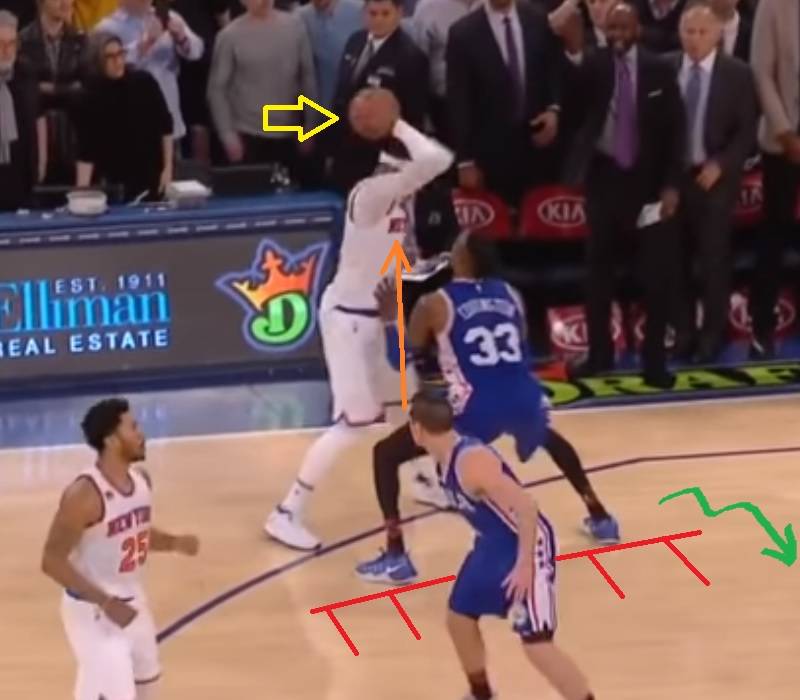 We can see that defender is close and that he denies a middle of the court. The only way to go is to the baseline. 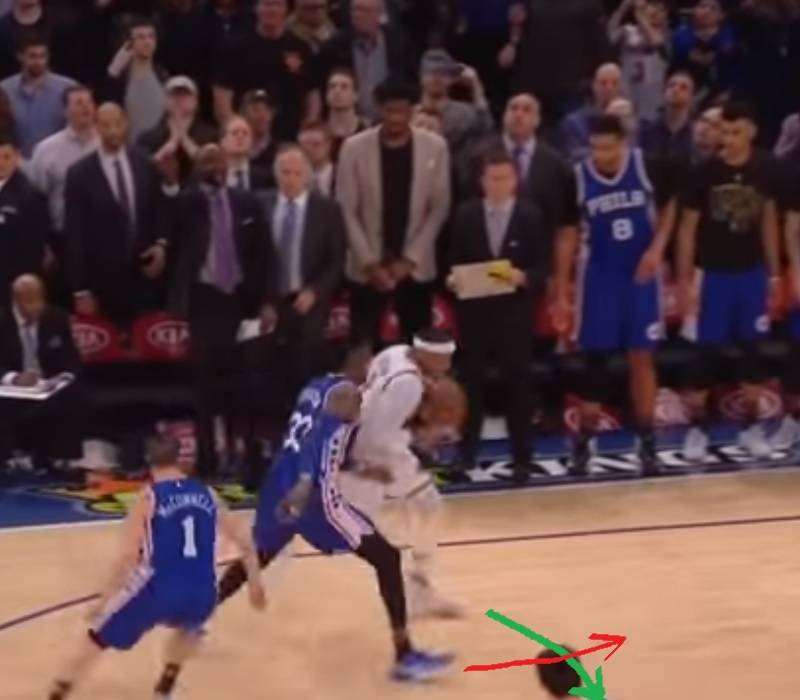 The move starts with the cross step, with putting the right leg between the ball and the defender. 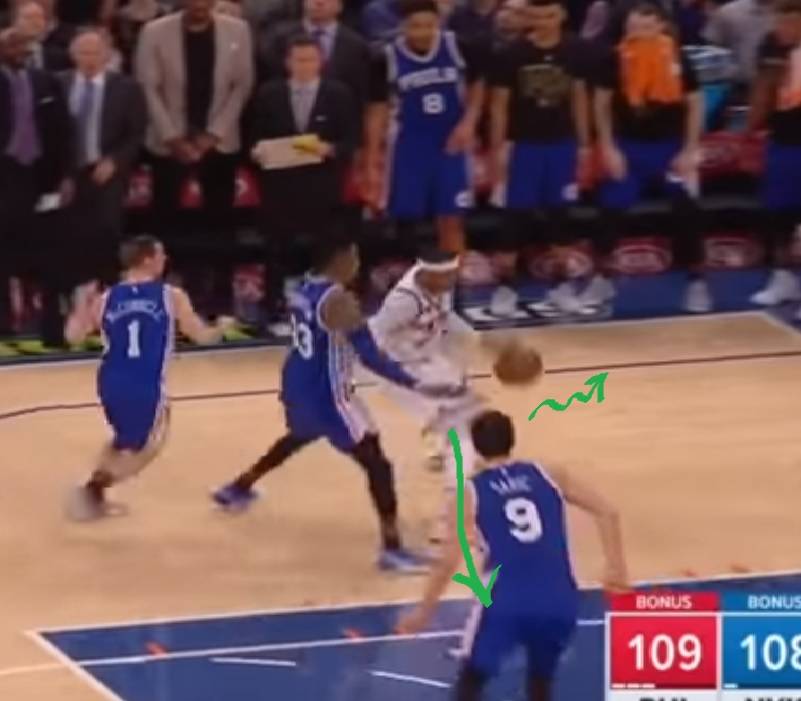 This next move will make a separation. Melo is leaning towards the defender, he is taking a hard right leg step and he is bumping him a bit with his right shoulder. 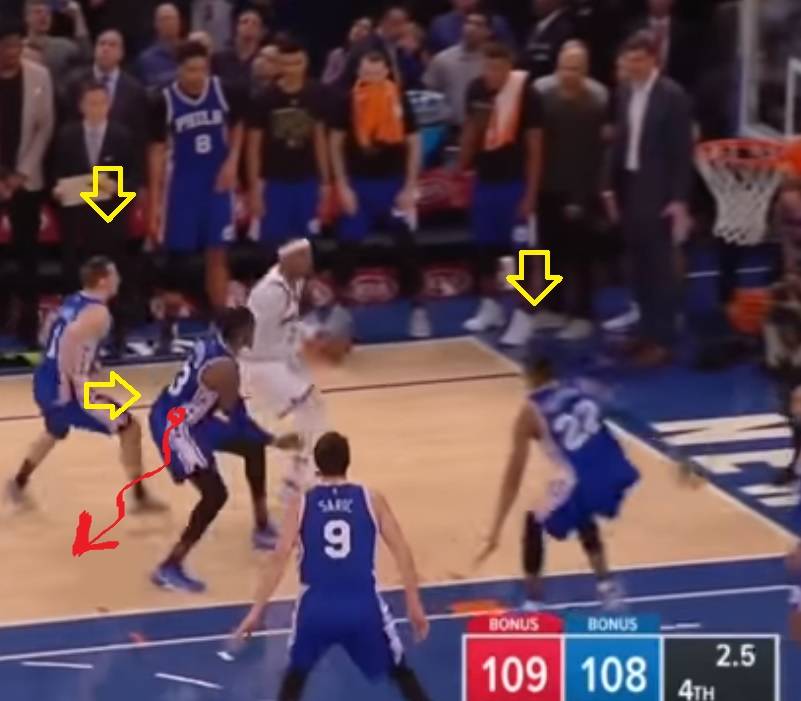 After the shoulder-check, Melo is stepping away from the defender and making space for the jump shot. Red Line represents the movement of the defender after the bump, and the Yellow pointers are showing how Melo was aware of the situation and how he created space in only undefended space on the floor. 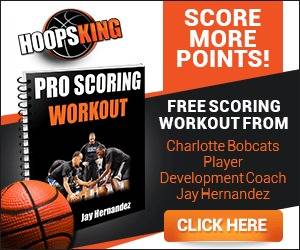 Let us see what Coach Trey has to say about Melo`s jab step jumper. The shot it self is not important as the careful planing and the court vision shown by this grate player.

The most important thing about using advanced basketball offensive moves is self awareness. There needs to be the correlation between the wishes and the possibility, otherwise the move will end in disaster. Advanced basketball shot techniques demand detail and hard work, understanding of every situation on the court and every outcome. There are not many players out there capable of using advance shot techniques, and the ones that can are legit superstars.

If you need some shooting drills, tips, or a complete set of videos that will help you help your players develop a good basketball jump shot, go rent a DVD by clicking on the link below: