If you are a basketball person and If you follow the game 24/7 like I do, then you will notice that basketball has evolved. The players are more skilled, bigger and faster, and they tend to take care of their body all year long. I can never forget a press conference after Laker`s won the championship in 2002, and when they asked Kobe where is he going to land for the summer, and he told the media that he does not know what are they talking about because he has a practice tomorrow morning in 5 AM. I remember that I was in a shock, just like everybody else, but my father, my dad told me: "Listen what is he talking about...that is a path towards greatness." Now days, everybody is doing it like Kobe.

Golden State Warriors are this year champions. For last 3 seasons I have been trying, like every other basketball person in the world, to figure out the Golden State Warriors offense, and of course I have failed. Newer the less, all of this thinking and research of mine, made me get back to the basics, and after a while, I ended up with 2 significant findings: 1. You can not defend the Dubs because even if you do not screw up any of the defensive postulates, the 2 of the historically grate shooters, who do not have cap on range, are playing with one of the best iso players the game have ever seen, followed by defensive player of the year candidate and so on and on..., and 2, there were many things, little things that matter and make a difference if we talk about defense, that I overlooked and did not pay much attention at for reason unknown.Guess I took it for granted.

Shout out to all of us, coaches. Lets get back to basics.

Lets start with analyzing 1 on 1 defense. 1 on 1 defense is a mix of good positioning and following some simple rules. Let us see how the pro players are doing it, then we will brake it down play by play.

All of the players playing defense had something in common, and those things are:

1. low stance, legs spread slightly wider then shoulders and foot open towards the area where you want the attacker to go

2. positioned on an arm length away from the attacker - this is optimal distance that can give you time to react both defending the shot or the penetration. And let it be known that this distance decrease as the ball handler is approaching paint. 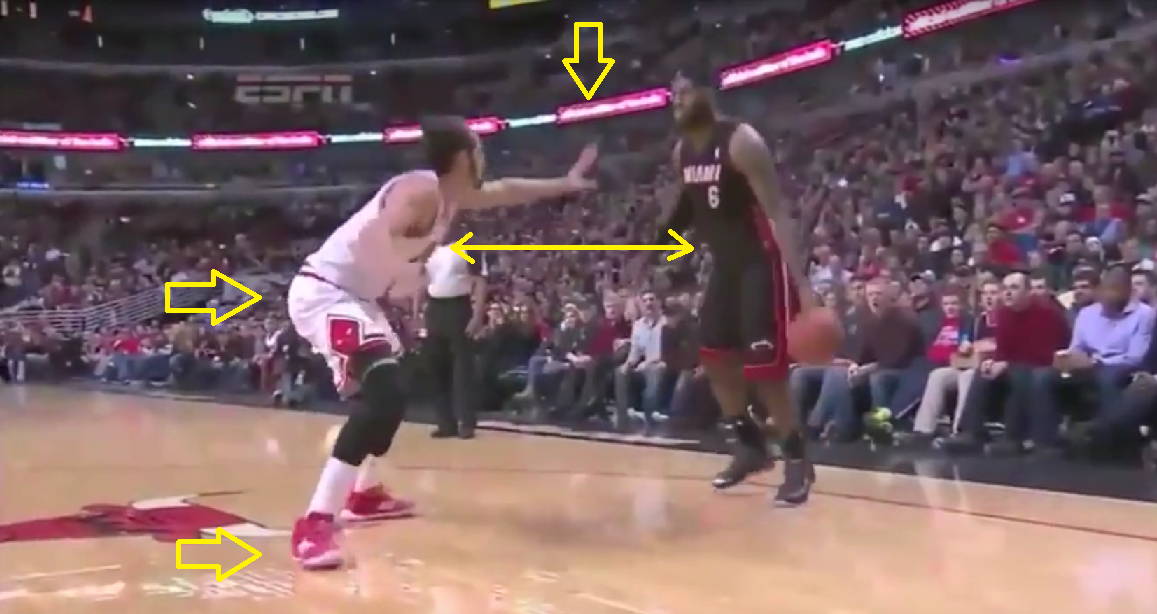 3. players that are defending are following a defensive plan (we all teach our kids to force the ball baseline and protect the dribble penetration in to paint, but on the higher levels of basketball there is a plan made specifically for each player based on the scouting - force left, stay close, no shots etc etc ... ) 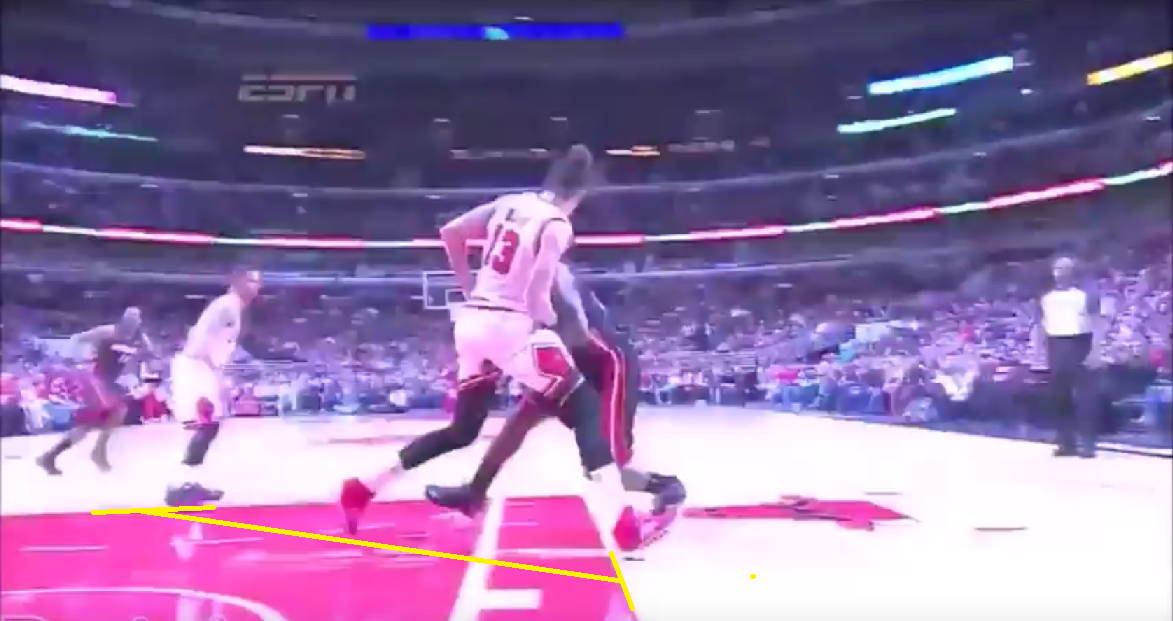 4. try to block the shot/hand in the face every time, everywhere....make him feel uncomfortable shooting. 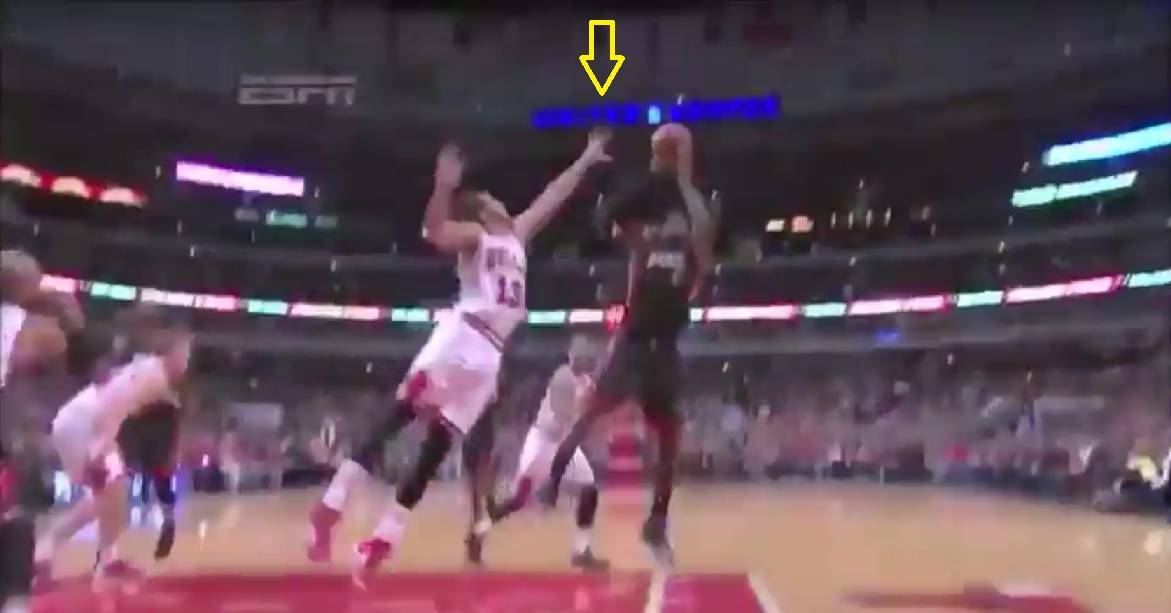 Now that we know what are the responsibilities in playing 1 on 1 defense, we will go through some X and 0 charts just to explain the positioning based on where the ball is. Basically, the ball can be on the Point, the Wing and in the Corner, and we will leave the Low Post for some of our next Blog analysis.

Defending the Point is the hardest. Why? Because the offensive player have full court vision, witch means he sees the position of every other player, their tendencies, movement, their plans. What we teach our kids is that as a defender defending point they should force their players week hand side / cut off strong hand side. This means that if the ball handler is a right-handed, they need to force him go left while preventing them to go right side ( defensive stance should be aligned with the yellow line and the blue line is the horizontal level of where defense should stand relative to offense position ) .

In case when we teach our players defense on the wing position, there are 2 options, in witch me personally do not see much of a difference. Force the corner or force the baseline to me is the same thing because the goal is to protect the paint. (yellow and purple line are defining the stance alignment, and the blue line is showing us the level of stance in regard of ball position).

When defending the corner, tell your players not to give up baseline. There are many speculations about this "rule" that I can relate to, but in my mind I find hard do accept some of the trapping in the small corner and the rotations and cover ups that goes with it.

After our players mastered 1 on 1 defense, it is time to teach them 2 on 2 defense and what should they do in this kind of situations. It really is simple, and same no matter where the attacker is coming from. If the player with the ball made some kind of advantage over the player that is guarding him, and he is coming your way, the right thing to do is that you need to step up on his lane of penetration. This will make the ball handler slow down, or even stop witch will lead to a situation where the on ball defender will have time to reconnect on defense.

Let us see this example of a good defensive reaction on dribble penetration.

The on ball defender changed a stance and decided to force the ball baseline, and the ball handler recognized the open path to basket, and then we have perfect reaction from the help defender witch is to leave his man, take two steps towards the ball and close the penetration lane.

As far as 3 on 3 defense is concerned, the principle of the first help defender on the strong side is same in every possible way, so the accent is translated on the weak side. As it is shown on the picture, the help defender needs to leave his man and position near the paint, beneath and in a stance that is leveled with the passing lane (shown by purple line), so he can see both the ball and his man. Is he going to step deep in the paint or just take few steps away from the player that he is responsible for is dictated by the fact is he leaving a good shooter or not.

Let us see the video.

Just focus on the front court defenders, and see how the weak side helper is moving towards the paint.

The real debate starts what is the exact way that those 2 players should stand. Some Coaches teach that they should stand aligned with the rim (middle vertical line that split the paint in to 2 same half`s). 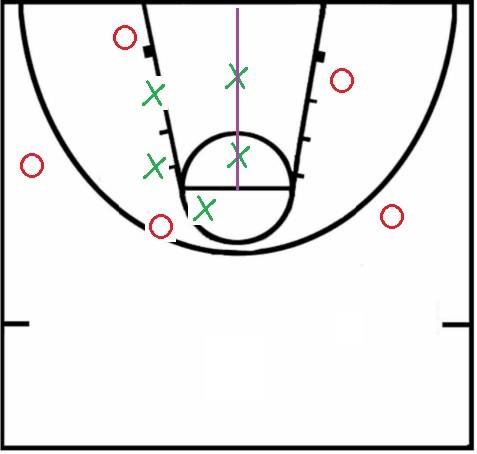 This is a bit too much extension for my taste, because, in my opinion it leaves much space for weak side maneuvers. I like to play with the one player in the paint area, and another under the basket but slightly beneath the level of the low post player on the weak side of the offense. I think that this particular player is best positioned to cover all of the paint area, and can see and alert on any front court action. 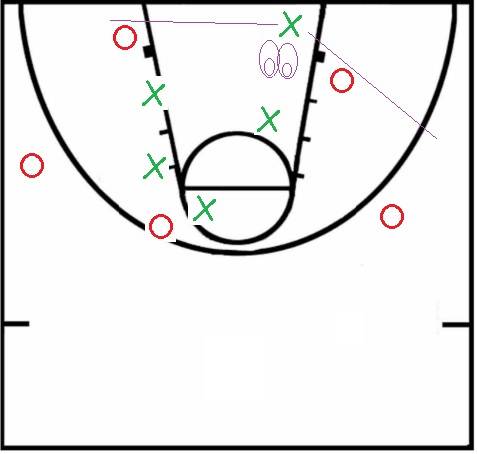 Here is a fine example of how the San Antonio Spurs are positioned versus dribble penetration.

By writing this paper, this small part of basketball defense, I just realize one thing. Defense is all about helping. No one can guard a good dribbler. You have to walk kids through how to help, and then how to help the helper. Defense is one man guarding the ball, and all others helping him to succeed.

If you want to learn more about basketball defense, the drills, rotations, mind sets, visit us at Hoopsking.com by clicking on a link below and chose from a variety of videos that can improve your knowledge in basketball.

You can also purchase some of the training equipment that can help prepare and improve your players defensive stance, posture and movement by clicking on a link below: 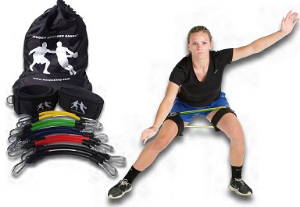