Young basketball players dream of becoming their favorite NBA star and someday playing alongside them. Youth players see the powerful dunks, the long 3-pointers, and want to mimic what they see. The problem is that at such young ages players are a lot smaller than their favorite players and have limited skill sets. Dunking or even shooting on a 10-foot rim is simply out of the question for the majority of youth basketball players.

Five- and six-year-olds lose interest quickly when they find out they cannot come even remotely close to making a shot on a conventional 10-foot basket. The easiest way to build the confidence of youth basketball players is to adjust the height of the rim to a more appropriate position. Adjusting the rim height for young players makes the game more fun and allows players to work on the fundamentals of the game, especially shooting. 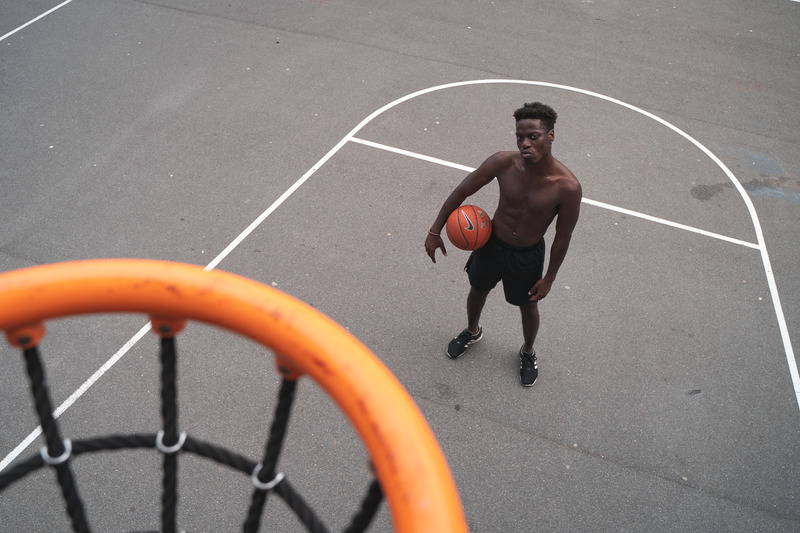 The American Sport Education Program (ASEP) was established more than 50 years ago to study how to best develop sports programs that meet the needs of children depending upon their age. In reference to youth basketball, ASEP has developed a set of recommended rim heights for all youth.

Youth up to second grade should set the rim at a height of six to seven feet. Kids at this age are still learning the game of basketball and how it is played. They have limited strength and are still developing their motor skills. Learning to shoot on a basketball hoop set at six feet helps prevent poor habits.

Youth attempting to shoot on a regulation 10-foot basket often end up “throwing” the ball at the hoop. Over time, these bad habits become much harder to break as kids age. Adjusting the height of the rim can help young players develop proper shooting habits and other fundamentals as they learn the game.

Kids continue to grow and develop in third and fourth grade. They gain more strength which allows them to increase their shooting range. At this age, the height of the rim can be adjusted to eight feet. Some will gain confidence as they see the rim height being increased. Even if some youth are more advanced, resist the temptation to take the hoop up any more. Allow players to continue to develop their shooting stroke on an eight-foot rim.

As young players reach ten and eleven years of age, the height of the rim can be adjusted up another foot. A nine-foot rim is a perfect height for fifth graders as they continue to gain strength and develop good shooting habits. Again, it’s tempting to take the hoop height up to the standard 10 feet. Don’t do it just yet. Let players continue to develop proper shooting form.

Children that have reached sixth grade are ready for a standard 10-foot rim. As players become accustomed to the new rim height, it is beneficial to focus on shooting from free throw line distance and closer. Once players have shown they can consistently hit shots from 15-feet and in, they can move to longer range shots. The same holds as players age and grow. They develop the strength necessary to step back and shoot longer range jump shots.

Youth basketball in Europe is much different than it is in the U.S. The recent success of many Europeans in the NBA is proof that European countries are doing something right. There are a few reasons why these countries have had success producing NBA stars like Luka Doncic.

One reason for the success of youth basketball overseas is the fluidity of the European system. Players play for a club and stay with that club all year. Teams are not tied to schools as they are here in the U.S. In the U.S., players play for their team during the season but then must find alternatives when basketball is not in season.

Another key reason for youth success in Europe is player development. European players are taught the fundamentals of the game regardless of their size. If a player happens to be over six-feet tall in fifth grade, that player is not automatically relegated to the post. Europeans develop all skills in all players.

Guards learn how to post up and play inside. Big men learn how to handle the ball. All players learn all the fundamental skills of all positions on the floor. In the U.S. players are often slotted into a certain position early on in their youth career. Think about all the European players that have played – and are still playing – in the NBA. Former Dallas Mavericks star Dirk Nowitzki was a 7-footer, but he was also one of the game’s best shooters.

Another reason for the success of European youth basketball is rim height. While countless youth programs in the U.S. have young players attempting to shoot at a regulation 10-foot basket, European youth learn to shoot on rims set an age appropriate height. It’s much easier for an eight-year-old to learn how to shoot properly on an eight-foot rim.

In the U.S., there are youth basketball organizations everywhere. These organizations differ by region, state, even county and city. What one league does might not be the same as another. Some young players may participate in an organization where smaller balls are used at younger ages. Some clubs may use a shot clock where others may not.

Recently, the NBA and USA Basketball got together to come up with age-appropriate rules and standards for youth basketball. One of the items addressed, of course, was rim height.

For youth ages seven to eight, an eight-foot basket is recommended. For those youth ages nine to eleven, a rim height of nine feet is recommended. The NBA and USA Basketball chose the age appropriate heights based on the idea that lower basket heights allow younger players to develop proper shooting form. Doing so increases the likelihood of future shooting success.

How to Help Your Young Shooters

There are a number of products on the market designed to help youth basketball players. There are, of course, basketball hoops that are adjustable. These are easily adjusted from heights of six feet all the way up to the standard height of 10 feet.

The Junior Jammer Youth Backboard Adapter is another such product. The Junior Jammer, made by Gared, is designed to give younger players the opportunity to play on competition systems by lowering the rim height to 8-feet-6-inches.

The Junior Jammer Youth Adapter comes with its own fiberglass backboard which secures to an existing goal. When attached to the goal properly, the rim height of the Junior Jammer is 8-feet-6-inches. This is the recommended official height for youth basketball.