Basketball is becoming more and more of a mismatch game. If you watch and
high level basketball, you’ll rarely see the 5 standard positions like in the 1980s or 1990s. There isn’t only one guard who handles the ball, and no teams have a single post who dominates the block on every possession. Interchange and fluidity are key.

Whoever has a mismatch abuses it. Watch an NBA game and you see the Houston Rockets desperately trying to create mismatches, setting ball screen after ball screen to get a big, lumbering big stuck on an island with James Harden 30 feet from
the hoop. The Los Angeles Lakers do the same with LeBron James, having him set screens on small guards so a smaller player switches onto him. He then eats them alive in the post.

These post up mismatches played a big part in the Cleveland Cavaliers upsetting the Golden State Warriors in the 2016 NBA Finals. The Cavs, knowing they were over matched and outgunned, tried every play to force Steph Curry into guarding LeBron
on the block. From there, he would either score or force the double team. If the double team came, LeBron skipped the ball to the open man, creating constant closeouts for the Warriors and an advantage for the Cavs offense. 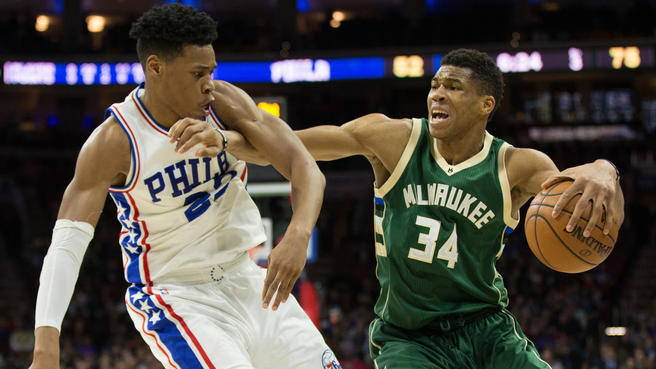 This style of play is trickling down into every basketball league in the world. Every player has to be able to hold their own in whatever they are doing on the court. That means everyone needs to be able to post up. Even if you’re a 5’9 point guard, there is always going to come a time where you have a post-up mismatch with someone smaller guarding you. Or maybe you are similar heights, but you have a strength or quickness advantage that is going to give you the advantage near the hoop.

We’ve got 4 post moves that will help you abuse this mismatch.
But before we get into the post moves, let’s go through some post up basics that you need to know:

The ‘pound dribble’ is a way to cover some ground in the post while staying strong. By staying low and taking a single dribble with two hands (any more than that is a double dribble), you can create some space for yourself while making it very difficult for any defenders to get their hands on the ball.

This is the bread and butter post move of players all over the world. For good reason. The baby hook is as simple as it is effective. Any size or strength advantage you have over your defender is very apparent. This shot can be very effective as it can be performed quickly off of the catch, or you can get to your spot and shoot it off of the dribble. Like anything in basketball, you want to be able to perform a baby hook with either your right or your left hand.

A counter move is essential in the post. The most common counter to the baby hook is the up and under. If you have scored on your defender with the baby hook a few times, they are likely to be overly worried about the same move again. This is going to make them jumpy, because they want to contest your shot. As you dribble into your hook shot, doing a pump fake where you would normally shoot will get your defender off their feet. From there, it is a simple step through back the way you came into a layup.

This move is especially helpful if you have a slower opponent on you. Instead of trying to post up as close to the basket as possible, post up about 8-10 feet from the hoop with your back to it. As you catch the ball, reverse pivot by pulling your outside foot through the space between you and the defender (watch the video, it shows you how). This creates an instant attacking advantage for the offensive player. If the defender does not close the gap, that is an easy 10 foot jumpshot. If the defender is overzealous and closes out out of control, attack either side of him to get to the rim.

It is important to remember when attacking out of the mid post to keep contact with your defender. It is unlikely that you will blow by them so badly that they are left in the dust, and you do not have a lot of space to cover. By maintaining contact with the player on your hip or backside, you know where they are while you drive to the basket, allowing you to finish at the rim accordingly and not get blocked from behind.

This is another move that will probably be used against a similarly sized player who has a strength advantage over you. But you’re quicker. Starting again with your back to the basket, the fadeaway can be used either off the catch or off the dribble. It is a nearly unguardable shot to stop, and if you can shoot using either pivot foot and over either shoulder, you can get a good shot whenever you want.

The most important aspect of this move is to focus on really using your legs to both create space and have power in your shot. Creating power through your legs is especially important with a fadeaway because you are pushing away from the hoop. On a normal jumpshot you put all of your power towards the hoop, while here you only use a small amount of it to put the ball towards the hoop.

There are a few common problems seen with young players who use a post fadeaway. The first is that the player does not square their shoulders to the hoop. Of course it is impossible to fully square your shoulders, but by facing up to the hoop as much as possible, you give your shot the greatest chance of going in. The second problem is over fading away on the shot. Only fade as much as you need to for a clean shot.

Most of the best players in the world have extended their careers with the Fadeaway. Michael Jordan, Dwyane Wade, and Kobe Bryant all added a deadly mid post fadeaway in their later seasons. LeBron is well on his way as well. Notice that none of these superstars are true post players.

If the greatest players in NBA history are adding these post moves to their repertoire, shouldn’t you as well?