Basketball is a complex sport where 12 players and a coach play against the other 12 players and their coach. Every piece is valuable and if played/used in the right way and at the right time, the chances for winning the game are big.
Some like to look at the game from a 5vs5 perspective and they are right too. In dead, there are 10 players on the court at all times.

I like to look at the basketball in a 3 on 3 way, and this something that I learned from Greg Popovic of the San Antonio Spurs. He sees the game in a 3 vs 3 perspectives and he tends to give his players all of the options when they find themselves on offense.
If we think about this, the basketball is a 3 vs 3 game because if we want to have good spacing on the floor, the good in-game geometry, every set that we have is going to put 3 players on the strong side of the offense and 2 players on the weak side.

What this further means is that we are going to have good offensive options on the strong side and a bit risky options on the weak side (expect if you have players like LeBron or Luka or Jokic who can make those "bad" cross-court/over the player/ behind the back passes for the shooters in the corner.

Playing 3-on-3 is an excellent way to discover how to play basketball and what are the options that a player has. And in today’s system, there are more chances to play it than ever before! You can play 3-on-3 in the yard, at school with a few friends or even at the Olympics if you are really good.
You can join one of the many 3-on-3 competitions that are popping up everywhere.

And, if you’ve got a clever basketball coach, you’re apparently going to play many small 3 on 3 games during team practices.
To help you have an idea of what to do in a 3 on 3 drills during the practices, we are going to present you 5 actions that are going to put your players in a position to have an open shot, a good pass option or a mismatch.

People should stop looking at the pick and roll as a 2 on 2 actions. Why?
Because the only good way to defend this action is to include a third defensive player and that means that somewhere on the floor we have an advantage in terms that our player is all alone or there is one player on defense guarding our 2 players on offense.

There are several ways of running the pick and roll and depending on how the defense is going to react, your team will have options: 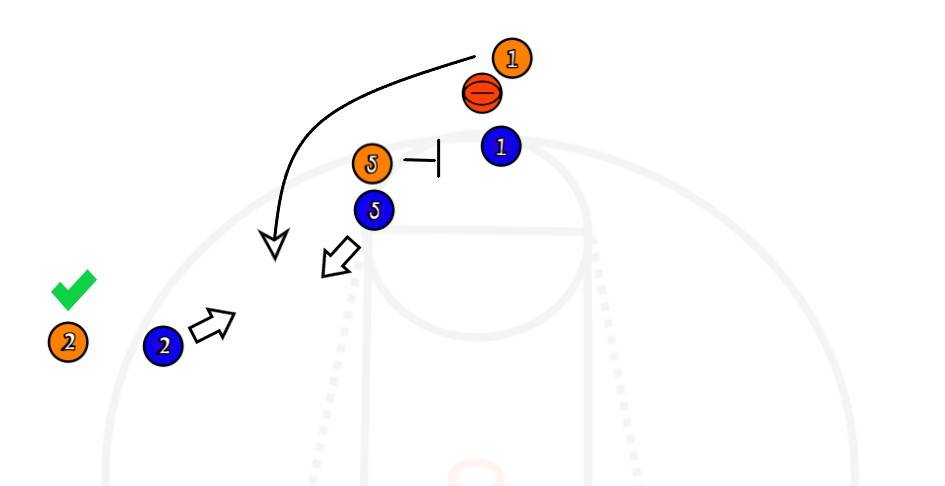 The first thing that we want to do when playing pick and roll, we want to have a switch where their 5 is going to guard our 1. It is perfect that our 1 is the fastest player on the court and that their 5 is the slowest.

What I like to do, I like to put a good shooter in the corner and I like to tell my 1 to be aggressive and to attack off of dribbling.

Corner 3 is the most desirable shot in basketball and if you play pick and roll this way, you can expect the defense to help as shown in the picture. We then have a good pass for a corner 3. 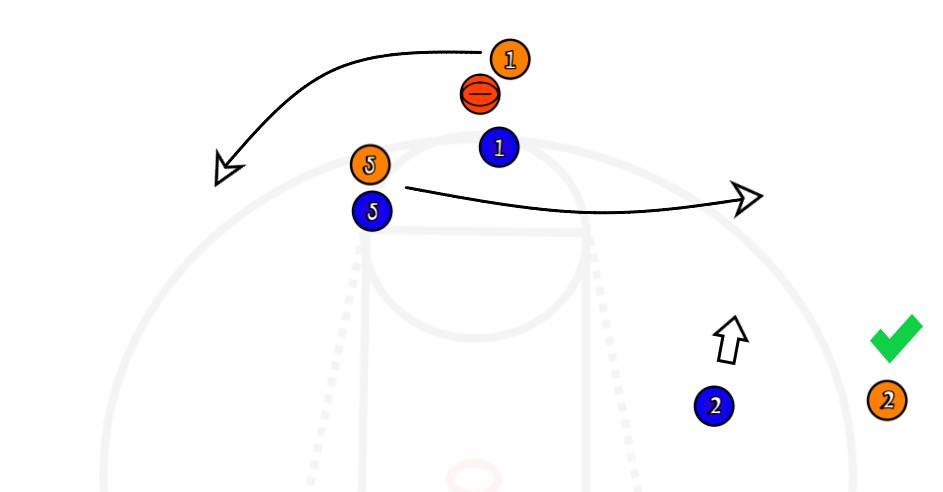 I am going to skip the play where the defense is sending a defender from the opposite corner so the 1 can have the cross court pass for a weak side corner 3. I do not like this pass, so when I see it, I tell my 5 to go in a pop action so now he can make that corner 3 pass.

Usually, for this action, 2 must go up and run toward the 45° spot. This action is good because if there is no shot, 2 and 5 can play another pick and roll action. 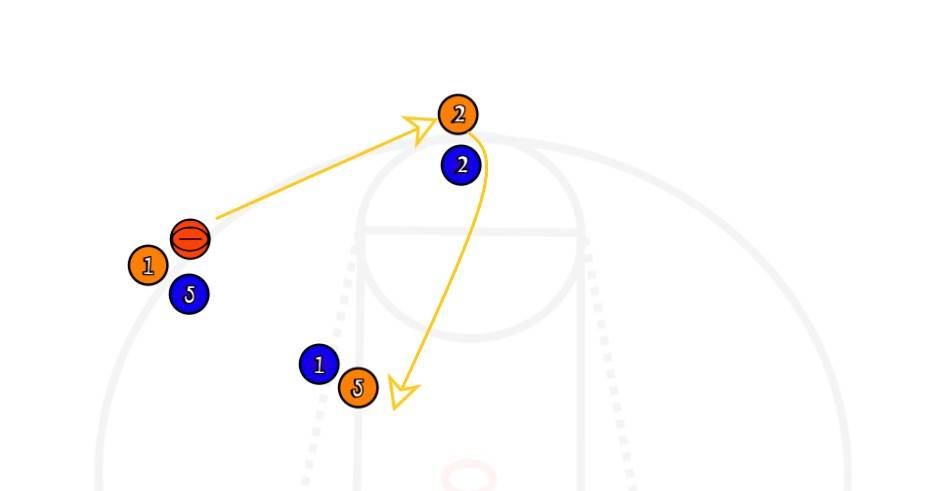 Another play that can be seen often in games is the situation where we have a switch, where 5 is fast and 1 can not easily outrun him, and where their 1 is fighting our 5 and establishing position in front of our 5. Then, our 2 must go to the high post area and receive the pass so he can play some high low action.

Our 5 must keep their 1 in front of him if we want this action to work. This 3 on 3 actions is one of the oldest plays in basketball. 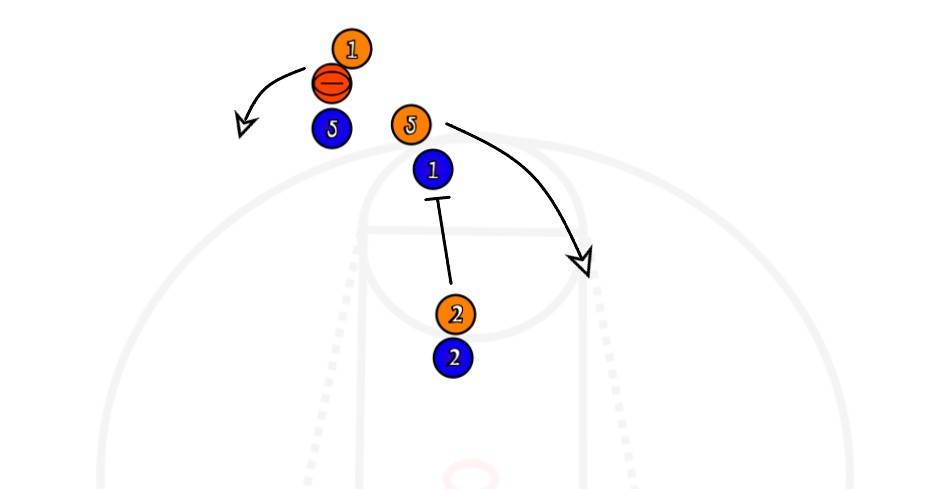 This is another option that you can have when playing pick and roll/ 3 on 3 actions. You must tell your 1 not to be very aggressive on attacking their 5 because we want the ball and their 5 to stay high. 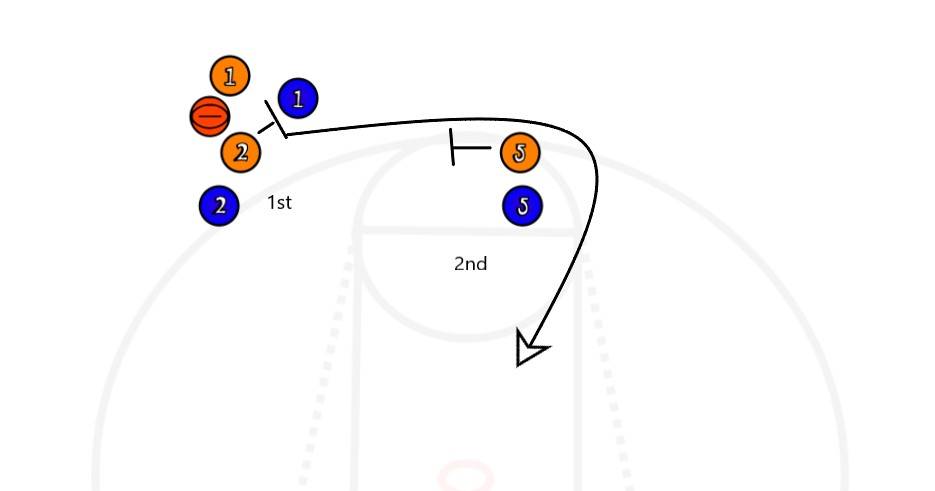 This is the horns action where we have a 1-2 pick and roll, and then 5 is making a back screen for 2 who plays a pop action at first but he has a cut option after the screen.

We all know that there are more ways to use pick and roll action. I gave you these 5 because I think that they are the most used ones in basketball. 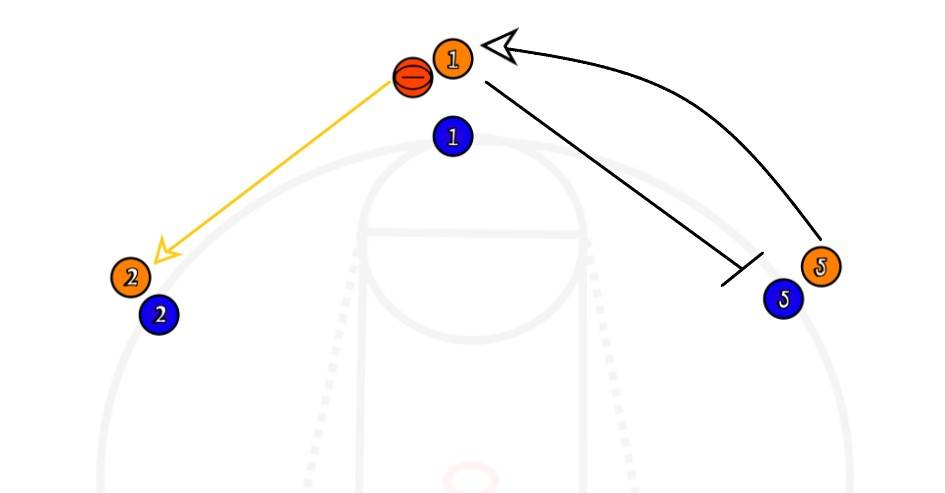 This is not some kind of set play. I tell my players that, if they are standing, they can exchange screens once or twice, just to keep the defense occupied so they must be concentrated on them and not on the ball.
This is a simple play where the player with the ball is making the pass to the one side and setting the screen on the other.

For this action, it is very important that the player that is about to receive the screen is patient and that he is not starting to run early but after the screener has stopped moving. 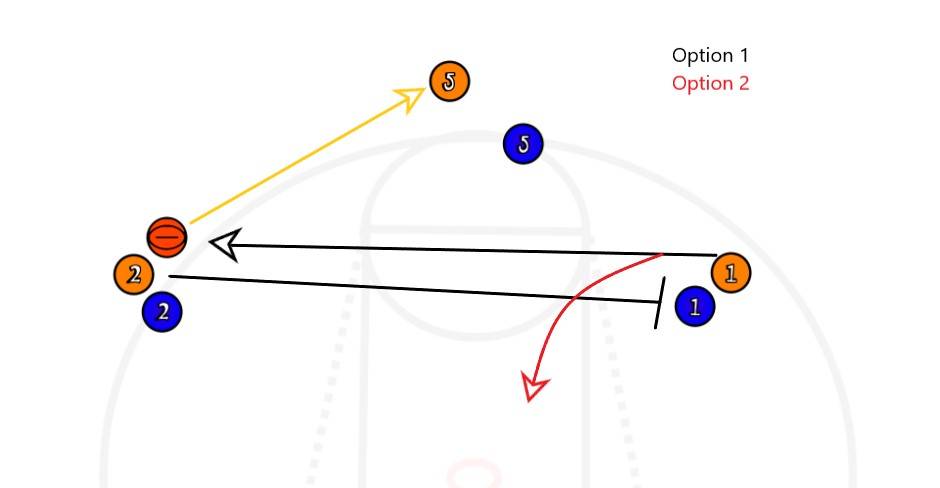 The next move is a cross court screen. The player that is receiving the screen has the option to change the side or to cut toward the basket for a layup. If the second option is in play, the screener has to open toward the ball and not wide. 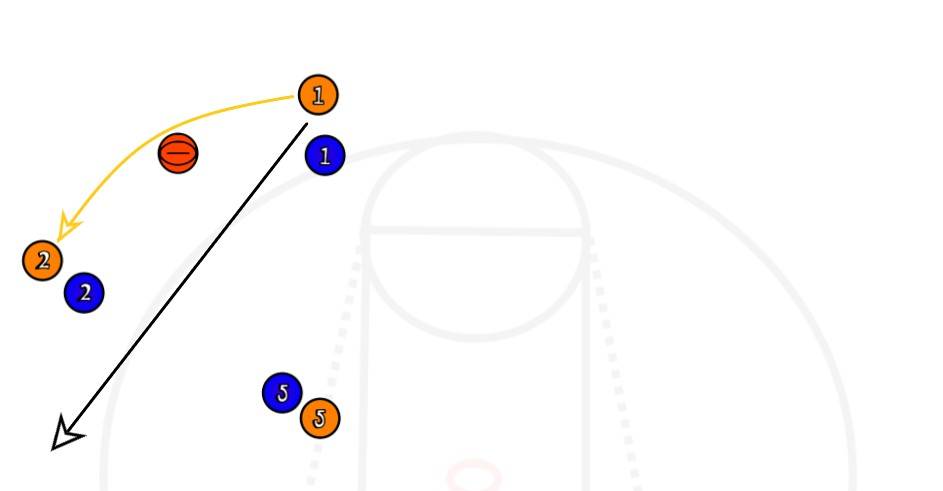 This way of playing the triangle offense is the one that I like the most. The best thing about this set is because it does not require positions and at the same time it opens up the floor and it gives many offensive options.

It all starts by passing the ball on one side and making a cut toward the corner.

The next pass is the back pass to the corner and a back screen from the low post to the 45°. Here we have a cut and a good pass opportunity. 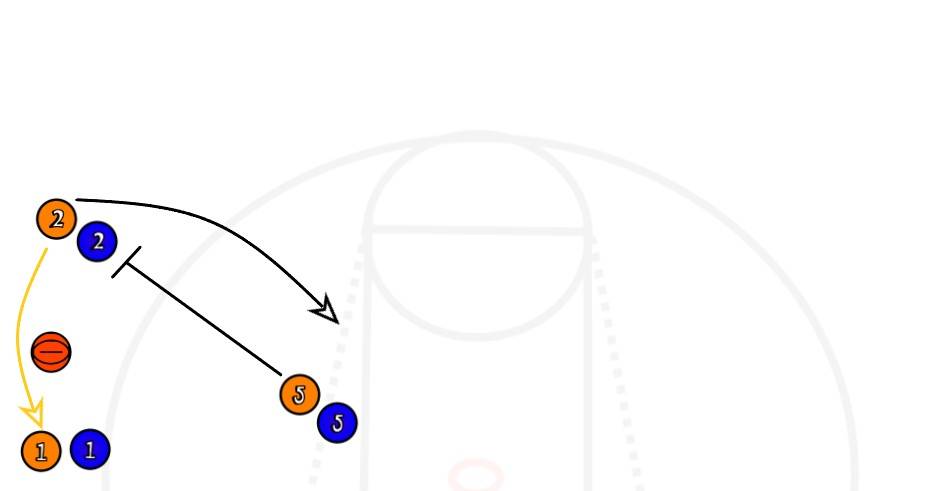 After this play, we must pass the ball to the 45° player and here we have options to go for a hand-off play, or, pick and roll or give and go.

After this, it is really all about the situation and the players that are involved. 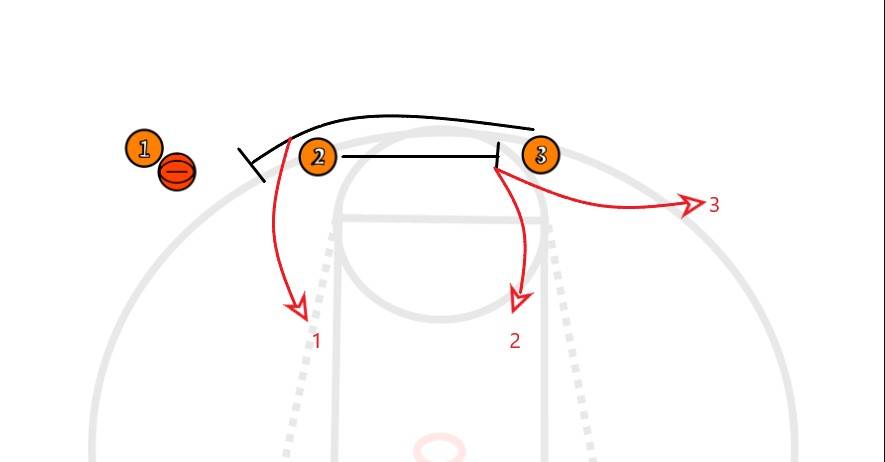 Here we have a player with the ball, and two players slightly above the elbows, ready to make some screens. The action starts with the 2 making the off ball screen for the 3, who is supposed to make an on ball screen.

The off ball screen is something that you must practice with your team because it is going to keep the defense occupied with defending those screens instead of adjusting and helping. Here we have some additional options:

1. Number 3 is coming to make a screen for 1, but if his defender is trailing, he can turn a corner and cut toward the basket.

2. Number 2 makes a screen for 3 and he roll toward the basket. 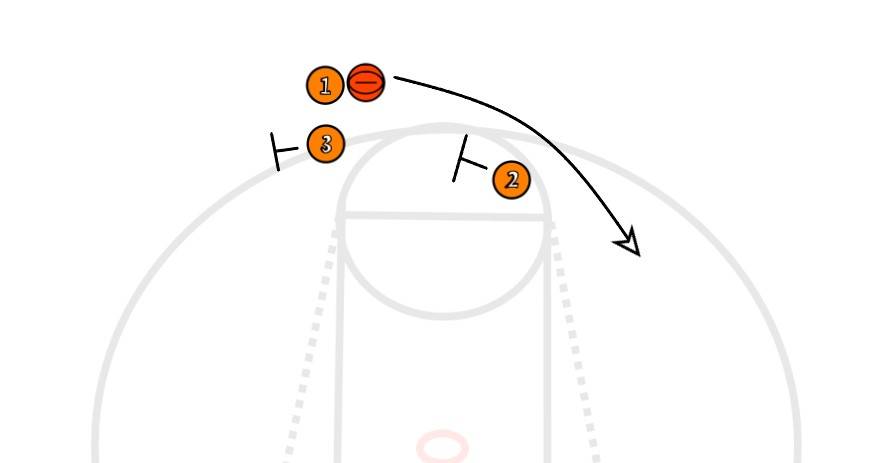 Secondary options here are situational. One of the players that are making a screen can dive, and the other must pop. Both of the players need to read the defense and act in a manner to use the mistakes. 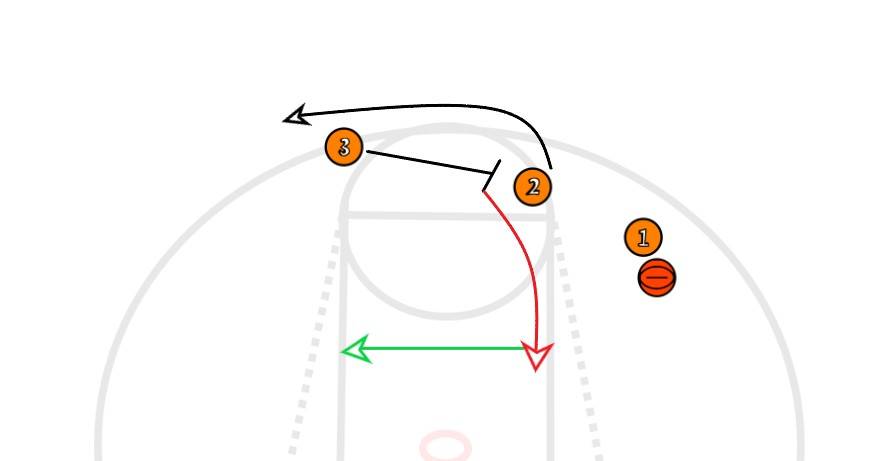 As the player with the ball passed the second screen, and if he did not take the shot or penetrate toward the basket, number 3 now is coming to make a blind screen for 2.

Number 2 goes high and wide, and number 3 dives toward the rim (red path). The first pass option is to make a pass to number 3 for an easy layup, or if its a bad switch (small defender on a bigger offensive player), the player with the ball must wait a bit for number 3 to establish a good position.

If the pass cant go to the low post area, then the pass can go to number 2, who gets open for a shot.

The third option is a high low pass from number 2 to number 3. (Green).

5. Cross and a Screen 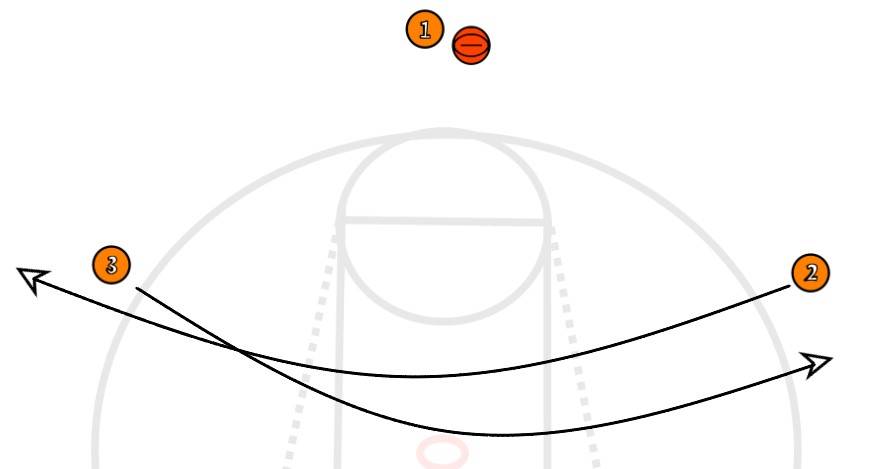 In the first part of this play, we want to make defenders move and take care of their own man instead of lurking the ball and making defensive adjustments.

The ball is then passed to one side and the player No.1 is going to dive toward the basket in the line that is going through opposite elbow. 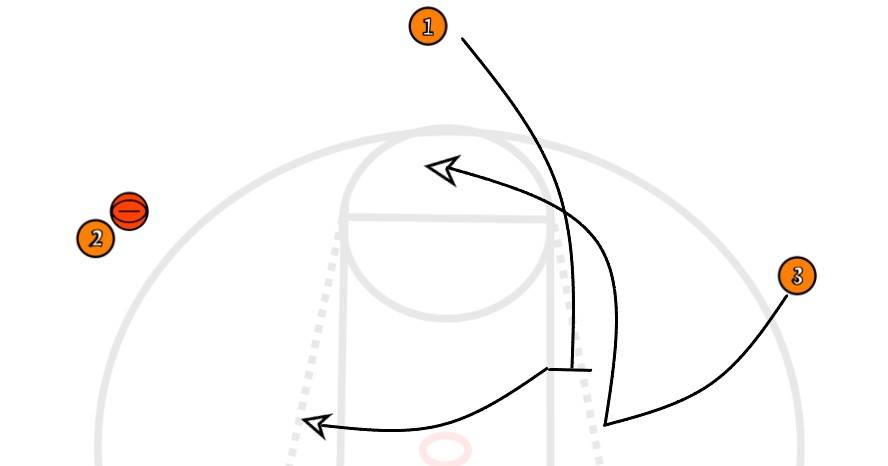 In this manner we are going to end a thought with some simple basketball pillars:

1. Pass the ball to a player that is in a better position

2. Keep a defense occupied, both on and off the ball

3. Make a right play every time - shoot when open, pass when the next guy is open

6. Target the defender that you want to attack